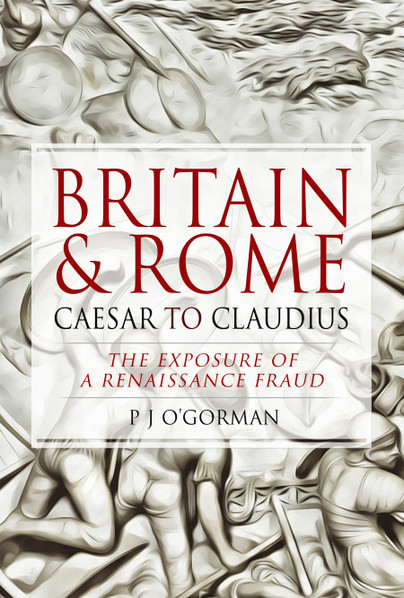 The Exposure of a Renaissance Fraud

Click here for help on how to download our eBooks
Add to Basket
Add to Wishlist
You'll be £8.99 closer to your next £10.00 credit when you purchase Britain and Rome: Caesar to Claudius. What's this?
Need a currency converter? Check XE.com for live rates

This is a bold reassessment of one of the pivotal points in British history. PJ O’Gorman analyses the sources for the period from Julius Caesar’s first forays into these islands to the invasion under the Emperor Claudius and the conclusions he reaches are nothing short of radical and call into question much of the accepted narrative of Roman invasion and conquest.

The author starts by showing that Caesar’s initial cross-Channel adventures were motivated not so much by seeking the glory of taming primitive savages but to gain control of an economic powerhouse. His treatment of the period leading up to the Claudian invasion and the invasion itself is even more shocking. Most significantly he argues convincingly that two of the most important Roman sources underpinning the conventional narrative are in fact Renaissance fakes and that their acceptance has distorted the interpretation of modern archaeological evidence. Meanwhile he reinstates a discounted British source. The result is a startlingly different version of Britain’s early history.

Well this book will certainly cause healthy debate! O'Gorman writes with confidence on this subject, and his opinion that the old sources we know and believed have been created during a re-writing of history period is certainly controversial. I am unfamiliar with this author so am not sure if his version of the facts holds water but his assured writing gives pause for thought. This is a fascinating book and as a fan of revisionist history I support any assertions which change the way we view historical events. I leave it up to the reader to decide if there is truth to what we learn here. Keep an open mind and read 'Britain and Rome: Caesar to Claudia's. I look forward to reading other opinions on this publication. I am grateful to Netgalley, Pen & Sword and PJ O'Gorman for a great book.

This is a very well researched, very thorough investigation into the accuracy of the accepted history of Roman Britain, For those who are not expert in the subject, there is sufficient information included in the book to give a reasonable overview of the country in that era. O'Gorman contends that the sources normally quoted in academic circles (Tacitus, Dio) are in fact renaissance fictions.

I am not enough of an expert to know whether the author has cherry-picked his information and his sources, but for the lay reader, there are certainly some very convincing and thought provoking arguments cogently presented here.

Most of accepted history is built up in countless layers by historians starting from a common point and adding and filling out detail from newly (re)discovered sources. Occasionally, however, someone comes along and causes a sensation by refuting the commonly accepted basis, forcing a re-examination of the entire framework. In this case, the author has boldly stated that the stanchions of early British history, including Tacitus (who, according to O'Gorman, invented Boudicca whole cloth) and Cassius Dio who also was less factually inclined and more a writer of fiction. That later historians based their work on the shoulders of what were essentially writers of fiction (which may have been invented by later renaissance authors whole cloth), obviously casts our modern history into doubt.

I was fascinated by the boldness of the claims, and I do applaud the skepticism with which he examines and presents evidence piece by piece. I am not enough of a real scholar of history (more of a keen amateur), but I admit that I was fascinated and he certainly makes a cogent argument.

This is the sort of book which could either change the entire paradigm, or be debunked as the work of a crank by other academics. I'm a bioengineering nerd and my real bonafides lie in other fields, but I confess that I am fascinated by what he has to say. I am also enough of a history nerd to love the sort of "gauntlet throwing" language he uses in the book and I would love to see a peer-review of the work here.

For actual historians and fans of deep-diving subjects in history, the language is quite accessible, and the author has done a meticulous job with the annotations. It appears in my admittedly inexpert opinion, to be rigorously built up and correct. The maps, timelines, and facsimiles and photos helped to add a layer of context and helped me to keep track of the chief actors.

Five stars. I can't say absolutely without reservation that the author really knows what he's talking about, but he certainly seems to make a good case. I liked that he wasn't mealy-mouthed in the least about throwing down the gauntlet. I've made a note for myself to come back in a couple years and check the peer reviews for this book.

This book looks at Roman Britain through a boldly sceptical lens, arguing that the traditional sources relied on by historians and classicists, such as the works of Tacitus and Cassius Dio, are not authoritative historical accounts, but rather Renaissance frauds written by later authors. The author even dismisses Boudicca, the queen of the Iceni whose statue stands before the Houses of Parliament by the Thames and about whom all English primary students are taught, as a fictional creation "fancifully introduced to British history during the Renaissance...[who] arose from the machinations of the author of Tacitus"! By pointing out inconsistencies and gaps in the popular, widely-accepted narratives about Roman Britain, the author presents an alternative, shockingly different perspective on what really happened during the Roman invasions of Britain from Caesar to Claudius. The author analyses a wide variety of sources, illuminating connections and gaps and drawing upon a vast corpus of work to provide evidence for his claims. While I would not introduce ideas from this text to students who are learning about Roman Britain for the very first time, I would certainly want older students to be exposed to some of the arguments and insight presented in this book, in order to encourage critical analysis and scholarly debate. This book will be a valuable resource for not only established historians and scholars, but also aspiring historians and classicists who are seeking an intellectual challenge to spice up the standard history curriculum taught in schools.

Really interesting take on this historical period and events. The author presents some compelling arguments and challenges traditional interpretations of evidence to offer a credible economic motivation for invasion. It has made me want to revisit other interpretations to see if the arguments hold their ground! I think it is wonderful when authors revisit and challenge traditional histories - this is a basis for continued analysis and learning. Great job doing that!

PJ O’Gorman enjoyed many years in his family bloodstock business – buying, training and rehabilitating racehorses in Newmarket, before indulging his true vocation: History. P J demonstrated his aptitude for both researching and writing when he received a First-Class Honours degree in History and won acclamation for his dissertation on the causation of Caesar’s invasions of Britain – the inception of this current work. PJ is married to Rebecca, with whom he has six children.