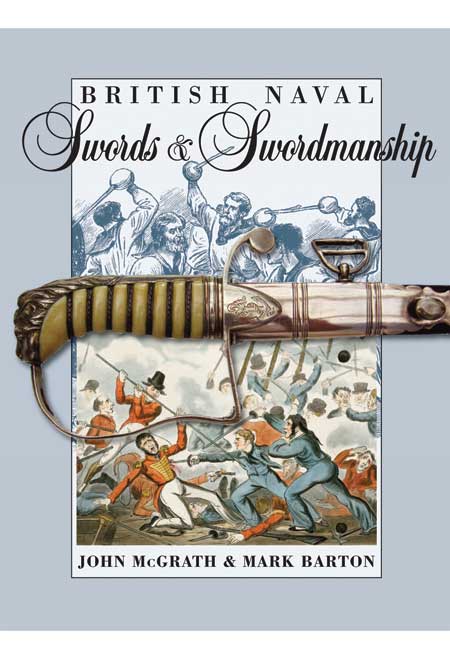 Click here for help on how to download our eBooks
Add to Basket
Add to Wishlist
You'll be £10.00 closer to your next £10.00 credit when you purchase British Naval Swords and Swordsmanship. What's this?
Need a currency converter? Check XE.com for live rates

This new publication is intended to bring together a mass of research dealing with all aspects of British naval swords. Unlike the much sought after Swords for Sea Service by May and Annis, this work offers a far broader coverage and, for the first time, the complete story of swords and swordsmanship is presented in one concise volume.

While the swords themselves are described the authors also tell the story of naval swordsmanship. For example, subjects such as how swords and cutlasses were used in action and how training was conducted are covered. The authors also address how the use of swords developed into a sport in the Navy, and how swords and swordsmaship entered naval symbology in such areas as ships' names. Many current myths are addressed and corrected, and the story is brought right up to date with information on the sport from the 1948 to 2000. While the book concentrates on the Royal Navy, foreign weapons, including those of the Irish Naval Service, are mentioned where appropriate.

Other British Maritime organisations such as the Merchant Navy, the Customs and Coastguard Services, and the Reserves are also addressed. The book also covers subjects such as the dating, collecting and conservation of swords and re-examines those swords attributed to Nelson. The Appendices include the first list of Swords of Peace awarded to Naval units to be published. Recent research by the authors is also reflected in updated lists of Patriotic Fund Swords, City of London Swords, and Naval fencing champions contained in the Appendices. The comprehensive nature of the work has not been attempted before and the book will appeal to a wide range of naval enthusiasts and historians, collectors of weapons, fencers and re-enactors.

As extra information, the book has four appendices dealing with special themes such as: Patriotic Swords granted, City of London presentation swords, Wilkinson's Peace Sword, and Service and Trophy Champions.

A source of indispensable documentation for naval modellers and miniaturists.

Beautifully printed on special quality paper with an abundance of attractive and informative images, should and deserves to become the bible of all those interested in the subject. Overwhelmed with facts and figures, the collector, historian, and sportsmen have, in this single volume, all the information they ever need to know.

The authors [are] both Naval officers, fencing Champions and sword collectors, it is not then surprising that this publication reflects their expertise and passion for the naval sword.

The authors have meticulously researched their subject and produced a great, informative read. It is a must addition to any edged-weapons collector's naval enthusiast's, or naval historian's library.

An ideal introduction into the fascinating world of the sword collector. The authors succeed in charting the history of naval swords up to the present day when, in a reflection of modern warfare, the sword has been reduced to a wholly ceremonial function. Highly recommended.

A new and very welcome important addition to the study of the naval sword and to all having an interest in collecting and researching naval weapons, and those associated with the sport of fencing. A fine new work, which i am sure is destined to become a major reference work in the years ahead.

The Nelson Dispatch, Journal of The Nelson Society

A thorough and detailed introduction to the topic, not just for the collector, but for anyone with an interest in the traditions, customs and history of Britain's Senior Service. A veritable treasure trove of facts and information, this is a book that will appeal to anyone with an interest in the Royal Navy, edged weapons or just naval history and no library should be without it.

This book is informative and educational, delivery its information easily, which is especially good news for someone new to this genre, explaining details and providing context, as well as a valuable chapter exploring such questions as dating and identification. Which is spot on as it is aimed at historians, enthusiasts, fencers and re-enactors.

The Authors are well placed to write such a book, both having backgrounds in the Royal Navy, as well as being competitive fencers with an interest in Naval history, resulting in a well researched volume that presents not only the past but the naval sword's role in the late 20th and 21st Century. The book's glossary and annotated sword and components photograph proves a valuable tool for use later in the book, as well as on a broader plain.

This will probably be the standard reference for the foreseeable future. It is valuable for several reasons. Firstly, it shows the environment of seafaring and government policy which made the use of swords in service necessary. Secondly, it shows the aggressive purpose of carrying swords in a context of controls on their quality and use. Thirdly, it examines the symbolism of swords in a way which is much less than ideological or anthropological; although it provides useful data in both respects.

No book on swords could be complete without some information on the usage of swords or swordmanship. There is an interesting chapter on how officers and ratings were trained in this art and its transition to a sport. The book concludes with Appendices on the swords of the Patriotic Fund of Lloyd's, the Wilkinson Swords of Peace and Service Champions and Trophies. Fascinating.

This volume is written by a retired Royal Naval (RN) officer (Captain McGrath) and a serving Royal Naval officer (Commander Barton). Both of them have been serious competitive fencers who share a passion for naval history and naval swords. They come from an expert background and their knowledge, wisdom and experiences are to be noted. They are perhaps the world’s best experts on the topic of Royal Naval swords.
This is the best and most comprehensive book I have every come across on this topic and it is fascinating. It represents excellent value for money and should be in the personal library of anyone interested in these interesting swords and their histories.

A thorough and detailed introduction to the topic. A veritable treasure trove of facts and information. Easy to read... a well researched and authoritative work. Will appeal to anyone with an interest in the Royal Navy, edged weapons or just naval history. No library should be without it.

MARK BARTON is still a serving in the Royal Navy. Both have been serious competitive fencers and share a passion for naval history as well as naval swords. Between them they have published more than forty articles and five books or booklets on the subject.