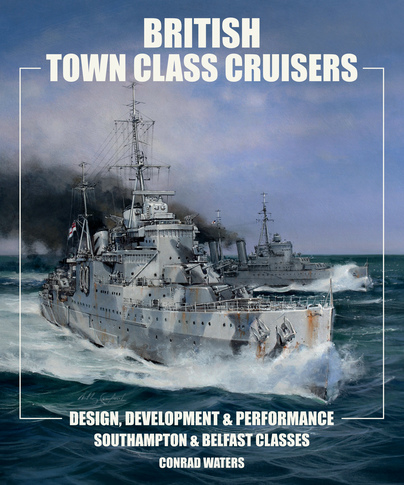 Add to Basket
Add to Wishlist
You'll be £40.00 closer to your next £10.00 credit when you purchase British Town Class Cruisers. What's this?
+£4.50 UK Delivery or free UK delivery if order is over £35
(click here for international delivery rates)

This excellent book will surely be of interest to many of her visitors and to Warship readers seeking a detailed study of her and her nine sister ships.

This is a superbly produced, well-illustrated and informative book which is a pleasure to read. Very highly recommended – and not just to cruiser fanatics like me!

The visuals shine through the quality of his illustrations and photographs from great professionals such as A. D. Baker III, John Jordan and George Richardson.

With the heavy action seen by the Town cruisers so soon after their construction, it is fitting that someone so clearly devoted to telling their story as accurately as possible undertook this work, and it is doubtless that Waters’ scholarship will serve as a solid foundation for further research into the Royal Navy’s cruiser force in the Second World War and Korea.

This is the form of naval history that the publisher and author excel at. The large format, beautifully produced and presented book covers one of the most important classes of cruiser to serve the Royal Navy. – Most Highly Recommended.