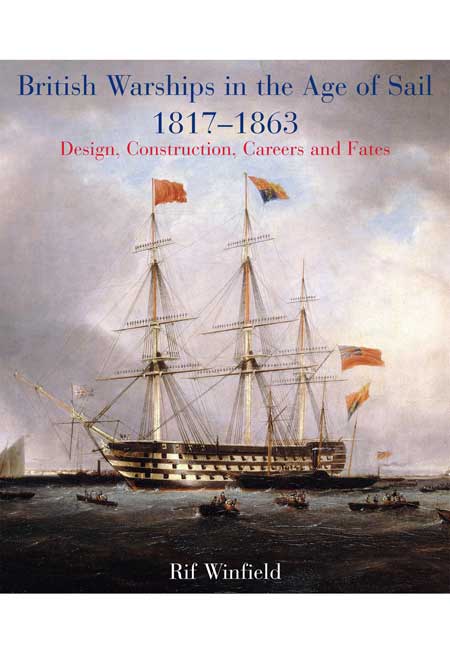 The publication of this book sees the completion of a monumental work listing the technical details and career histories of every significant British warship between 1603 and 1863. Following three earlier volumes, this one carries forward the story from the post-Napoleonic War reorganisation of the Royal Navy's rating system to the end of sail as the principal mode of propulsion.

Although apparently well documented, this is a period of great complexity in the procurement and naval architecture of ships. The introduction of steam radically altered the design of vessels under construction and was later retro-fitted to others, while many 'names' lived a ghostly existence on the Navy List: ships ordered but not started, and in some cases having their intended draughts altered more than once before being cancelled entirely.

This book meticulously sorts out and clarifies these confusions – a major contribution in itself – but for the first time it also provides outline service histories for an era that is largely neglected. Like its companion volumes, the book is organised by Rate, classification and class, with significant technical and building data, followed by a concise summary of the careers of each ship in every class.

With its unique depth of information, this is a work of the utmost importance to every naval historian and general reader interested in the navy of the sailing era and the formative years of the steam navy that supplanted it.

This magnificently produced volume sees the concluding of a life's work detailing practically every vessel owned or operated by the Royal Navy, of whatever size from the smallest barge and lighter to the largest man-of-war, produced over some four volumes and taking the period back to vessels build in the 1500s.

This book is frankly a quite superb work of reference and deserves to be included in the library of everyone interested in this period of maritime history.

The text is very well illustrated... An absolutely splendid reference work, and an essential volume for anyone interested in the history of the Royal Navy during the first part of the period of British naval supremacy.

The information is invaluable for historians and people with an interest in this fascinating period of naval transition. It provides easy access to information that would otherwise have required much additional research form different archives and sources.
Overall, this volume finishes an invaluable set of research data that should be on the shelves of anyone interested in this period of the Royal Navy. If the use of the preceding three volumes is anything to go by, this volume will be well used as a reference tool, as well as one of those books that is a pleasure to browse.

The publication of this superb volume completes Rif Winfield's monumental work which lists the technical details and service careers of every significant British warship between 1603 and 1863.
With its unique depth of information, 'British Warships in the Age of Sail 1817-1863' is an important work [that] will be of interest to every naval historian and general reader interested in the Royal Navy of the sailing era. Very highly recommended.

Published on a suitable scale, in a superb edition, backed up by many examples from the National Maritime Museum's rich collection of contemporary images, this is a treasure for anyone with an interest in the subject.
Taken as a whole, the four volumes constitute a landmark publication, one that will be consulted for decades to come.

This is the fourth volume of a quartet which began its coverage of the Royal Navy in 1603 and ends with the advent of steam powered vessels exclusively. It covers all ratings of ships from first rates through sixth rates, sloops and smaller, both sailing and steam.

The book begins with its preface and bibliography, which contains an explanation of the rating system; this is followed by a chronology of naval events for the years covered in the title; then, the listing of vessels by rate; there are four informative appendices, including one that discusses the principle officers of the Navy; and, finally, there is an index of named vessels.

This is an excellent reference book for those whose passion is Royal Naval history, in this case broken down by ship. There is more to it than just a roster of ships, however. Included here one can find information on ship builders, their captains and the costs that go along with maintaining a sailing navy.
This is a go–to source for answers to questions about the subject.

As with the earlier Rif Winfield volumes in this series, the book is beautifully produced to a very high quality and design level [and is] copiously illustrated. Very far from being just a 'list of ships', this large and impressive volume is a mine of information which will enable anyone interested to follow up a casual reference to any warship of this period as well as providing a solid core of information on which to base further study.
'British Warships in the Age of Sail 1817-1863' constitutes an essential work of reference for any researcher, maritime historian or serious student of the naval ships of the Great Britain of the 19th century. We send our congratulations to Rif Winfield for his great achievement in concluding this four-part series that has added so much to the field of maritime historical scholarship.