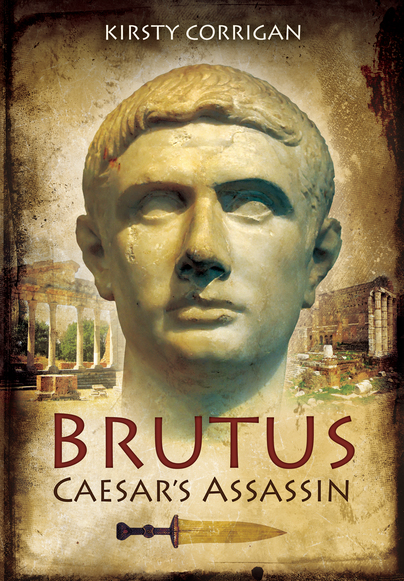 Click here for help on how to download our eBooks
Add to Basket
Add to Wishlist
You'll be £4.99 closer to your next £10.00 credit when you purchase Brutus: Caesar's Assassin. What's this?
Need a currency converter? Check XE.com for live rates

Although Marcus Junius Brutus is one of the most famous, or infamous, conspirators of Rome and the ancient world, if not of all time, knowledge of this historical figure has principally been passed to the modern world through the literary medium of Shakespeare's tragedy, Julius Caesar. Furthermore, any interest in Brutus has tended to focus only on events surrounding his most legendary act, Caesar's murder. This biography instead considers Brutus in his historical context, gathering details from ancient evidence and piecing together, as far as possible, his whole life.
While his actions played a pivotal role in Roman history, ultimately, although completely unintentionally, bringing about the downfall of the Roman republic, Brutus has often been neglected. Indeed, he has rarely been considered on his own merits, instead featuring as part of the biographies and studies of other leading political figures of the time, especially those of Julius Caesar, Cicero and Octavian.
As the first dedicated biography in over 30 years, this full and balanced reconsideration of this significant Roman republican is long overdue.

Kirsty Corrigan, a specialist in Roman literature at the University of Kent, has written a beautiful book, as only British publishers know how, in this case Pen & Sword Books.

The author writes in an elegant language, exposing her ideas in a fine and clear manner, the maps are beautiful, the illustrations well chosen, with a touch of humour.

As featured on Roman Republic.

This is an excellent biography of this key figure in the final days of the Roman Republic, proving that it is possible to write a full length biography of a Roman of this period without becoming biased in favour of your subject.

An excellent, informative and thoroughly researched book investigating the life of one of ancient Rome's most famous characters and his influence on a very interesting period of history.

For the general reader, who wishes to know a bit more about 'the noblest Roman of them all', as Shakespeare so memorably described Brutus, this book has much to offer.

The author has written a fresh review of this character and considered him on his own merits. He has presented the facts and offered compelling conclusions. The readable text is accompanied by illustration in the form of maps and a photo-plate section. A rewarding read.

When I began reading this it seemed a little dry, but that first impression was soon overturned by the author's enthusiasm for her subject. As the narrative heads toward the Ides of March, so the pace quickens and becomes almost breathless. What her prose leaves us with in the final half of the book is that although the conspiracy planned the assassination of Caesar with meticulous care, they made no such plan for a regime to replace him. They simply assumed that Rome would be liberated and revert to business as usual...

... The cover notes tell me this is the first biography of Brutus in thirty years. That alone makes this a useful volume, but the truth is I find it hard to criticize. The author has done her research and written a tale that is both a good read and illuminating. Better still, it really does invite you to think further. Whatever conclusion she presents as her own, there is no escaping the one you reach from the authors narrative - that Brutus was neither lucky nor talented as a politician. Where she is undoubtedly correct though is that the actions of Brutus opened an opportunity for a bit-player to rise to mega-stardom, as one sickly youth pushes his way into the history books and becomes the revered leader of the Roman world, the entire opposite of what Brutus had hoped for.

Shakespeare entertained us with the wisdom that all the world's a stage, and everyone an actor upon it. Our opinion of the Romans is inevitably coloured by the antics of those colourful A-list celebrities that entranced or appalled the Romans themselves as much as us.

In this book, Kirsty Corrigan highlights the life and times of one supporting actor. Many of these people had important parts to play and it's good that they receive attention. Yes, you too Brutus.

Throughout her book, Kirsty Corrigan makes a host of good or even excellent points.

The author’s narrative is very detailed and well argued.

Five stars for a fascinating book and story that I thoroughly enjoyed.

Dr Kirsty Corrigan is an Honorary Research Fellow at the University of Kent, having formerly taught Latin there for several years as an Associate Lecturer. In 2010 she was awarded her PhD in Classical & Archaeological Studies, for a thesis entitled Virgo to Virago: Medea in the Silver Age. This examination of the portrayal of the mythological figure of Medea in Latin literature was subsequently published by Cambridge Scholars Publishing in 2013. Kirsty is a Collaborator on the Online Companion to the Worlds of Roman Women, for which she has contributed entries on Medea and Porcia, the wife of Brutus. In 2012 she wrote an entry on Roman Satire which was published in the Wiley-Blackwell Encyclopedia of Ancient History.