Bully Beef and Biscuits - Food in the Great War (Hardback)

Add to Basket
Add to Wishlist
You'll be £18.00 closer to your next £10.00 credit when you purchase Bully Beef and Biscuits - Food in the Great War. What's this?
+£4.50 UK Delivery or free UK delivery if order is over £35
(click here for international delivery rates)

Napoleon Bonaparte is often credited with saying that 'an army marches on its stomach'. A hundred years after his time, the soldiers of the Great War would do little marching. Instead, they would fight their battles from cold, muddy trenches, looking out across No Man's Land towards another set of trenches that housed the enemy. It is one of the remarkable successes of the war that they rarely went hungry.

During the war, the army grew from its peace-time numbers of 250,000 to well over 3 million. They needed three meals a day and, using the men's own letters and diaries, John Hartley tells the story of the food they ate, how it got to them in those trenches and what they thought of it. It's the story of eating bully beef and army 'dog biscuits' under fire and it's the story of the enjoyment of food parcels from home or eating egg and chips in a café on a rare off-duty evening. It's also the story of the lives of loved ones at home – how they coped with rationing and how women changed their place in society, taking on jobs previously held by men, many working as farm labourers in the Women's Land Army. This is a book which will appeal to food lovers as well as those with an interest in military and social history.

Fascinating detail is developed on the process of getting food to soldiers on the front, alongside personal accounts. To compliment this process, it is remarkable to think that, by 1918, almost 100,000 men has been trained as cooks. A Included are tremendous photographs, such as cook houses, and field kitchens, and the men cooking for themselves in the trenches;  which compliment the background of this process. Interestingly, we are reminded that hot food prepared by cooks, could be the daily ration for men in the front line, it was more often supplied when the unit were on relief in the reserve areas.  So, on other days, men would have to do their own booking, very often using tinned producers such as ‘meat and vegetable ration’.  This was a thing stew usually comprising beef, potatoes, beans, carrots and onions or similar vegetables. Very useful information is given, such as the role of Maconochie Brothers to supply the Army via tinned products... Overall, a fantastic book which would fit as comfortably in a school Home Economics Cookery Department was it would in a History Department.

John Hartley's book is well-researched, well-written, humorous and engaging...The book is beautifully presented and bound, with some very witty captions for the photographs...A book that deserves a wide audience.

Much of his research has plundered first-hand accounts from memoirs and letters, and his book features numerous photographs of field bakeries and fry-ups in the trenches. Each chapter also has wartime recipes so you can experience the food for yourself! 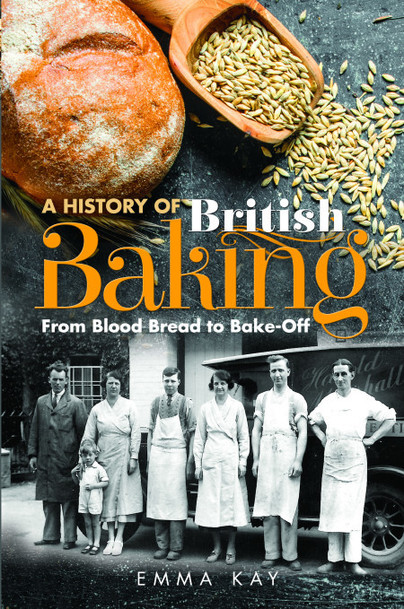 The British have been baking for centuries. Here, for the first time, is a comprehensive account of how our relationship with this much-loved art has changed, evolved and progressed over time. Renowned food historian and author, Emma Kay, skilfully combines the related histories of Britain's economy, innovation, technology, health, cultural and social trends with the personal stories of many of the individuals involved with the whole process: the early pioneers, the recipe writers, the cooks, the entrepreneurs. The result is a deliciously fascinating read, one that will prove to be juicer than…

Click here to buy both titles for £43.00
More titles by John Hartley