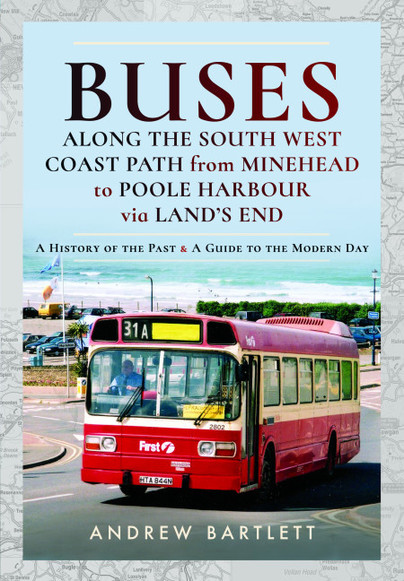 Click here for help on how to download our eBooks
Add to Basket
Add to Wishlist
You'll be £9.98 closer to your next £10.00 credit when you purchase Buses Along The South West Coast Path from Minehead to Poole Harbour via Land's End. What's this?
Need a currency converter? Check XE.com for live rates

Most books are written for a single audience, but this one addresses at least three. The bus enthusiast will find concise histories of over twenty-five operators along the coast from the 1920s to the present day and many unique photographs. The walker is offered details of bus services along the Coast Path enabling a series of linear walks with transport to and from base camp, as well as 1:50,000 Ordnance Survey Landranger maps of each section. The tourist or holiday maker is offered ‘Things to see’ with details and scenic views of some of the most beautiful and fascinating locations in the country.

Buses Along the South West Coast Path is thoroughly recommended. It should be in the rucksack or picnic hamper of anyone heading to this lovely corner of England.