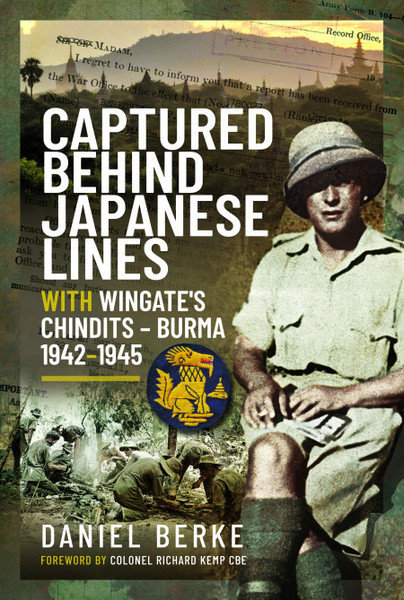 Add to Basket
Add to Wishlist
You'll be £16.00 closer to your next £10.00 credit when you purchase Captured Behind Japanese Lines. What's this?
+£4.50 UK Delivery or free UK delivery if order is over £35
(click here for international delivery rates)


Berke does a lot with very little in this moving book that is part history, part travelogue. He only had a few pages of memoir to work with but managed to integrate that into a broader narrative of Chindit operations that focuses on all the main themes.

This will be a must-read for anyone interested in the Chindits during World War II and is a well-researched and well-written testimony to one man's war. That man was Frank Berkovitch, an unassuming tailor in civilian life, but a Chindit and General Orde Wingate's batman during those crucial years in Burme between 1942 and 1945.

Frank's war has been skilfully re-told by his grandson, Daniel Berke, and draws on the author's memories of his grandfather plus relevant surving documents and supporting evidence; a useful narrative about a brave body of men.

A fascinating book about Wingate’s Chindits in Burma, an area of World War Two it gets little attention and with that not much in the way of books, films and documentaries. Luckily though we have Pen & Sword to rely upon, I think I read a great book about the Chindits last year in one of their Images of War books.

To me, the Burma theatre of war is little known. In fact I even looked on YouTube for a visual on the history of the Chindits and saw footage of the conditions Orde Wingates men operated in.
Fearless men.....or so they appear. It is hard to image what Frank was feeling deep inside, as he gave nothing away in his almost sterile matter of fact memoir. Frank Berkovitch, was a quiet, reserved tailor and it is his story that is told by his grandson. From recruitment, training, action and capture.....all harrowing and everything bad you have ever heard about Japanese treatment of POW's.
Although limited by the short memoir from his grandfather, the author combines much research to give a more fleshed out look at the fullstory.
My grandfather was in WW1 and he never spoke of his action there. It was a sense of duty that made these young men enlist .....little did they realise their whole lives would be scarred in a deep way.....should they be lucky enough to return.
A riveting read, for male or female. Thank you for sharing such a precious family story Daniel.