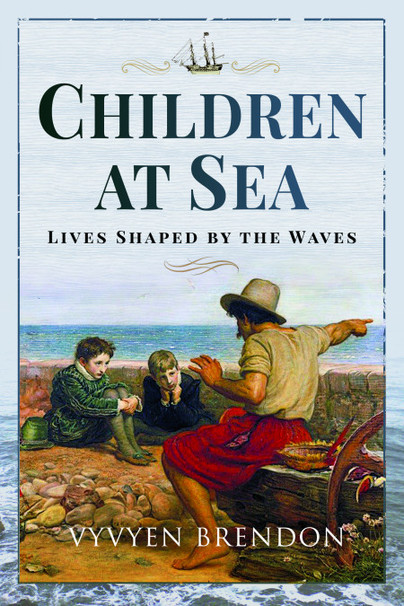 Lives Shaped by the Waves

Click here for help on how to download our eBooks
Add to Basket
Add to Wishlist
You'll be £4.99 closer to your next £10.00 credit when you purchase Children at Sea. What's this?
Need a currency converter? Check XE.com for live rates

Children at sea faced even more drastic separations from loved ones than those sent 'home' from India or those packed off to English boarding schools at the age of seven, the subjects of Vyvyen Brendon’s previous books. Captured slaves, child migrants and transported convicts faced an ocean passage leading nearly always to life-long exile in distant lands. Boys apprenticed as merchant seamen, or enlisted as powder monkeys, or signed on as midshipmen, usually progressed to a nautical career fraught with danger and broken only by fleeting periods of home leave. “Solitary among numbers”, as Admiral Collingwood described himself, they could be not just physically at risk but psychologically adrift – at sea in more ways than one.

Rather than abandoning seaborne children as they approached adulthood, therefore, Vyvyen follows whole lives shaped by the waves. She focusses on eight central characters: a slave captured in Africa, a convict girl transported to Australia, a Barnardo’s lass sent as a migrant to Canada, a foundling brought up in Coram’s Hospital who ran away to sea, and four youths from contrasting backgrounds despatched to serve as midshipmen. Their social origins as well as their maritime ventures are revealed through a rich variety of original source material discovered in scattered archives.

These brine-encrusted lives are resurrected both for their intrinsic interest and because they speak for thousands of children, cast off alone to face storms and calms, excitement and monotony, fellowship and loneliness, kindness and abuse, sea-sickness and ozone breezes, loss and hope. This book recounts stories never before told, stories that might otherwise have sunk without trace like so much juvenile flotsam. They are sometimes inspiring, sometimes heart-rending and always compelling. Children at Sea embarks on a fresh voyage and explores a world of new experience.

Children at Sea has many endnotes and includes a detailed bibliography and index. Black and white illustrations and photographs feature the people and places mentioned in the text.

Anyone with an interest in family life during the Georgian and Victorian eras will be happy they chose this book. Others may enjoy learning about the ways a child’s life in the past differs from what is normal now. All the different voyages make this a remarkably interesting sea story that will entertain and enlighten all readers.

Vyvyen Brendon has given her young charges a voice and allowed them to come to life through the pages instead of sinking to the bottom of the sea like flotsam is prone to do.

Having written two earlier books on youngsters past and present, former history teacher Vyvyen Brendon turned her attention to Neptune’s Realm.
All the subjects of this, her third book, were born in Georgian or Victorian times when the sea was still the key element of Britain’s national existence. Brendon focusses on eight central characters: a slave captured in Africa, a convict girl transported to Australia, a Barnardo’s lass sent as a migrant to Canada, a foundling brought up in Coram’s Hospital who ran away to sea, and four youths from contrasting backgrounds despatched to serve as midshipmen (one of whom was Sydney Dickens, son of Charles). Their social origins as well as their maritime ventures are revealed through a rich variety of original source material discovered in scattered archives.
A collection of stories that are sometimes inspiring, sometimes heart-rending – but always compelling.

Whether you are simply inspired by the sea, in the corner of the underdog, a social historian with a penchant for fresh insights or a family historian with an interest in understanding how archived material can be used to construct imaginative stories, this book comes very highly recommended.

Once I picked it up I found it compelling, not just because of the style of writing, but also because the author has chosen eight children who went to sea under very different circumstances: they include slaves, convicts, mariners, home children, and migrants.

The book is exceptionally well-researched with 20 pages of notes at the end, as well as a 'select' bibliography which runs to nearly 5 pages! You won’t be surprised to learn that the author is a former history teacher.

The book opens with the story of Mary Branham, one of the convict children who sailed to New South Wales with the First Fleet in 1787; the second tale concerns Joseph Emidy, a slave from Africa who secured his freedom and eventually became a well-respected musician in London. Other stories feature a Barnardo's girl sent to Canada, a foundling brought up in Thomas Coram's hospital who ran away to sea, and four young lads who chose the sea as a career, including one who was at the Battle of Trafalgar.

If you have ancestors who went to sea, or migrated (voluntarily or otherwise!) you'll find the descriptions of the harrowing conditions they had to endure eye-opening – it’s not surprising that some didn’t survive the journey.

As a child I used to envy the young boys I read about who were sent to sea. I had thought it was an option they pursued as it led to a fine career. Older and wiser, I have long thought how heartless a family could be to shove their sons out the door like that. Then came articles on children sent to boarding schools at young ages, even sent alone on ships to attend from India! Of course there were the Home Children stolen from their [parents and shipped off to Canada and Australia, and the young African children during slave days, and now refugees. It's a sad planet. Ms. Brendon has written a fine book of accounts of several children and their experiences. It should be used in history classes. So much suffering....

This is a beautiful book, full of depth and nostalgia and hardship of young people in their sea journeys.

Inspiring stories of children either deported, separated from their parents, or otherwise sent to the far corners of the earth. Resilient and strong, many of these stories end on a positive note. Detailed historical examination, readable and recommended.

"Children at Sea: Lives Shaped By the Waves" by Vyvyen Brendon is a highly detailed and thoroughly researched tome documenting and following the lives of eight children shaped by their sea journeys. A history lovers delight!

We can never forget the distressing photograph of 3 year old boy Alan Kurdi washed up as a child refugee from Syria from the Mediterranean Sea only as recently as 2015 alongside the other 90,000 lone child refugees that travelled that year from Asia or Africa. Many more have braved the seas since.
In this book we note the historic tragedies (amongst some celebrations) of how children (many less than 10 years of age) found themselves at the mercy of the ocean's elements, abandoned, transported, sold but rarely accompanied by loving parents on huge ships to the other side of the world.
The author has done some thorough research and it is justified in filling in the missing years of so many of these children. There are 8 separate stories but often they include other siblings from the same family giving an even wider and often distressing overview of how the innocence of childhood was destroyed early on.
"without a grave, unknell'd, uncoffin'd and unknown" wrote Byron of those young children who never even made shore - bodies often that floated to the deep secrecy of the seas not even exposed and recorded like poor Alan Kurdi.
Charles Dickens spoke and wrote often of childhood, its innocence, turmoil and many times of its rescue. However as as father Dickens himself was terrible. He said he was "more partial to girls" and although not in a sexual manner his worrying obsession with two of his wife's younger sisters and of course his later affair with an actress meant he very early on decided his sons should be sent abroad. We hear of Sydney - once feted by his father- but then rejected and sent to sea who always trying to seek reassurance spent unwisely, acted badly and then died a tragic early death. He along with William Barlow, whose father was an employee of the East India Company were not born as paupers, seeking the sea to escape terrible lives and penury, found in wealth, power and influence families who rejected them to the mercy of the waves in a manner that was even more abusive.
Slavery is topical today as we digest the past history of places like Bristol and the trade in people from Africa to support the rich white ship and plantation owners. It was interesting to read how Joseph Emidy (much like Solomon Northup of 12 Years A Slave) used his musical skill to try and ensure he had a sort of respectable and safe life beyond the manacles of forced labour.
Overall a fascinating and well written factual book. I remember meeting Margaret Humphreys who set up the Child Migrant Trust in 1987 whilst working for her MP as she even now grapples with the lives of child migrants sent by this country to Australia post WWII, whose lives were torn from their families and whose mental health has forever never been washed away by the mass expanse of water that divided them from their real mothers or fathers.

Well written, well cited, fascinating and heart-breaking book. I confess I had a favorite subject -- given my affection for teenage boys and sailors, I admit to a real soft spot for Chapter 3's George King. But all the stories were wonderful. This book is highly recommended!

Vyvyen Brendon read History at St Anne's College, Oxford. After a career in teaching she retired as Head of History at St Mary's School, Cambridge, to take up full-time research and writing. With the successful publications of Children of the Raj and Prep School Children, Vyvyen has become an acknowledged expert on the subject of youngsters past and present. Children at Sea is her third book. She keeps in touch with the rising generation through her work as chair of the trustees of a nursery school and through her five grandchildren.