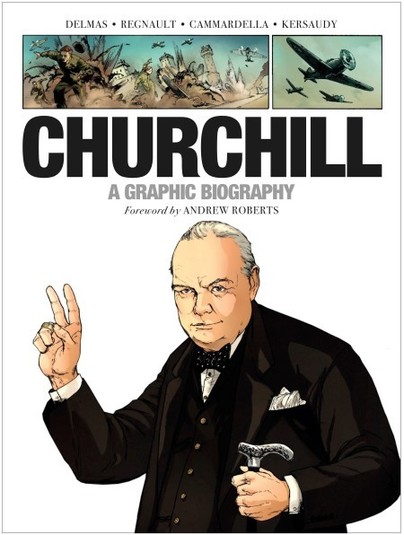 As featured in the Daily Express, February 2020.

As seen in the Daily Mail, February 2020: 'Churchill the superhero – Life of Britain's wartime leader is given comic book makeover in epic new illustrated biography.'

You'll be £10.39 closer to your next £10.00 credit when you purchase Churchill. What's this?
+£4 UK Delivery or free UK delivery if order is over £30
(click here for international delivery rates)

'A full and wholly fair representation of the most adventurous life in the history of British politics..there is not a word I would have changed in the text of this excellent graphical account' - Andrew Roberts

‘A wholly original and fresh approach to historical biography. Churchill would have been delighted to be a comic book hero!’ - Phil Reed, Emeritus Director, Churchill War Rooms

Sir Winston Churchill is considered one of the most important figures of the 20th Century.

This innovative graphic biography tells his extraordinary story, from his upbringing, through his military exploits and experience of the First World War, to his pivotal role in the Second World War. It explores the details of Churchill’s life within its historical and political context and brings the story to vivid life with precision, clarity and stunning visuals.

With a foreword by leading Churchill historian Andrew Roberts, the biography is followed by a series of information pages on Churchill and the War, providing further background to the story and the opportunity to explore some of the ideas in the book in more detail.

Beautifully drawn, bursting with facts and highly accessible, this graphic biography will introduce a whole new generation of readers to Churchill’s incredible career and important legacy.


I must admit this was totally not what I expected I don’t know but I saw it was a graphic biography and I just imagined lots of drawings and pictures about Churchill. But it was a number of Churchill photos at the beginning of the book but it was then a graphic story of Churchill’s life covering the major points. It was like a Marvel/Commando comic crossed with Winston Churchill. What a pleasant surprise and a brilliant idea. Here’s for why, I have a 16-year-old son, he saw me looking through the book, and as a fan of Marvel comics he said ‘Oh cool, I’ll have a look at that if you want.’ Boom, suddenly you have a teenager reading about history. So you have both our opinion in this review.

We thought it was an excellent book, I read it in few hours and thoroughly enjoyed it. It was quite accurate for what you can get into ‘comic’ style and most of the artwork was well planned and drawn. My son was very impressed with it and enjoyed having a read, and that’s from someone who doesn’t usually do history but does like reading comic books. So this is why I would give it a 5 star rating because it entertained two generations and it got both into history in a differing way than usual. I could see this being a good series of books if this was the plan, maybe even if it was just the major players in some of history’s biggest events. If you're looking for in-depth knowledge, you won't get it, it's a comic strip but a very good one indeed.

I read this book the day that it arrived – I had been looking forward to reading it – and it was well worth the wait and a real difference from the run of the mill, standard biographies that you can get on Winston Churchill – and as the book stays from the outset in the Foreword, there are over 1,000 available…

I thought that this was an excellent book – it claims to be a graphic biography and that is exactly what you get – The book focuses on key moments in his life and career and I thought that it was superb and the images in the book are stunning too.

Aimed at all ages, this is billed as a 'new and inventive' graphic depiction of the life of Winston Churchill.

Born in 1948, François Kersaudy, OBE, FRSL, is a former research fellow at Keble College, Oxford, and a professor at the University of Paris I - Panthéon-Sorbonne. Known in the UK for this two books Churchill and de Gaulle and Norway 1940 (Collins, 1981 and 1990 ) he also wrote the only French biographies of Goering, Mountbatten and MacArthur, and is best known in France for his prize-winning biography of Winston Churchill (Tallandier, 2000). Professor Kersaudy is also a chronicler writing for the French weekly Le Point.fr.

Andrew Roberts is a British historian and journalist. His modern works have focused on World War II figures, and his work was the basis for the BBC series Hitler and Churchill (2013). He won the 2010 British Army Military Book of the Year for The Storm of War: A New History of the Second World War (2009) and the Prix du Jury des Grand Prix de la Fondation Napoléon in 2014 for won the award for Napoleon the Great.

Roberts is currently a Visiting Professor at King’s College London and a Lehrman Institute Distinguished Lecturer at the New York Historical Society. He regularly writes for publications such as The Spectator and The Daily Telegraph.