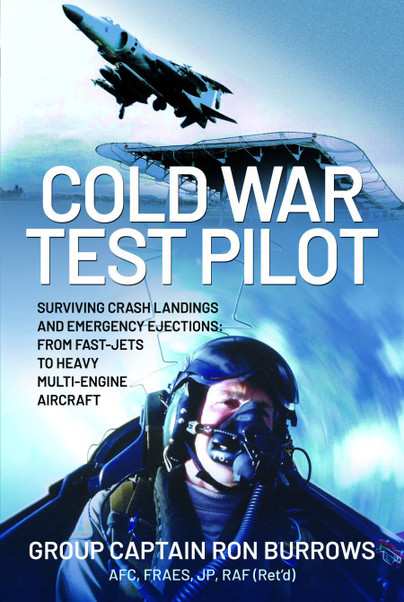 Click here for help on how to download our eBooks
Add to Basket
Add to Wishlist
You'll be £8.99 closer to your next £10.00 credit when you purchase Cold War Test Pilot. What's this?
Need a currency converter? Check XE.com for live rates

"I recommend as another excellent account of flying during the Cold War, this time as a test pilot, but with interesting diversions beyond."

This offering from Group Captain Ron Burrows gives you an insight into the man and his career. Being lucky enough to be training this person in a new voluntary role, means that many of the stories related in this book have been given to me by the authors mouth, and despite that I still found the book an enjoyable read that is informative at what a career in the RAF could encompass during the golden years of the jet age. If you are ever in the Salisbury area of Wiltshire, and have a chance to visit the Boscombe Down Aviation Collection based in an old WW1 airfield, you may be lucky enough to meet this unassuming man, as he is also a volunteer there.

There are not a lot of aviation memoirs from this time period. This one is excellent, covering the author's experience as a British test pilot. It is somewhat unique in that the author flew a very large variety of different aircraft types. The book provides a good selection of pictures too.

A fantastic account of the author's professional piloting career. From flying the very basic Chipmunk to test piloting the brand new Tornado (in the 1970s), the book covers details of each posting from fighting in Aden to flying a desk in the MoD.
A compelling read which is fascinating from cover to cover.
If you are interested in aviation then this book is a must for your bookshelf.
Highly recommended.

I have a long standing interest in aviation and am currently a glider pilot. I have therefore read many of the memoirs of test pilots; this one is without doubt the best. I think it is worth reading if you have a more passing interest in aviation, simply because of the quality of the writing and the power of the story. I found it almost impossible to put down.

This is a great book, easy to read with a wide variety of interesting aviation stories. I am fortunate enough to know Ron as we have shared an aeroplane, are both Test Pilots and have both written books published by Pen and Sword (Check out ‘Test Pilot’ by Chris Taylor). Ron is an incredibly modest man which comes across well in his writing. He gives a comprehensive history of his aviation career from joining the RAF to fly Hunters in Aden, undertaking the Test Pilot course at the US Navy Test Pilot School and then going on to have three interesting tours as an RAF Test Pilot at Boscombe Down. He was lucky enough to be able to continue working as a test pilot for a while after retiring from the military and his experiences of meeting Argentinian pilots who flew in the Falklands Conflict is fascinating. The book is well written, especially when explaining the numerous close calls he had, and illustrated with 32 black and white photographs to support the text. I would strongly recommend the book to anyone interested in flight test and/or fast jets from the 70s and 80s.