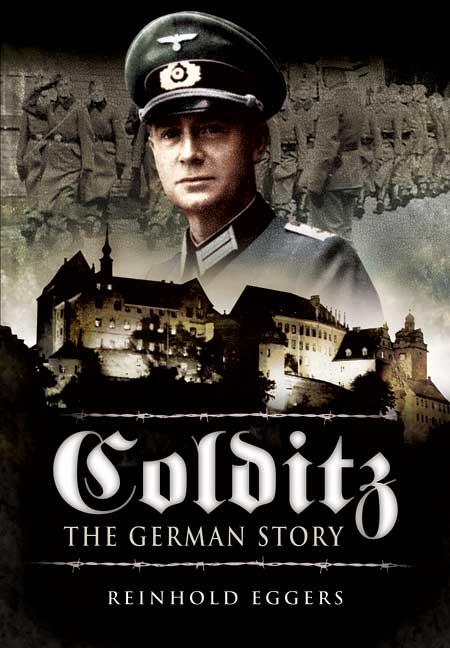 Add to Basket
Add to Wishlist
You'll be £10.39 closer to your next £10.00 credit when you purchase Colditz: The German Story. What's this?
+£4.50 UK Delivery or free UK delivery if order is over £35
(click here for international delivery rates)

This is the first account of Colditz, the most famous of the German prisoner of war camps, as seen from the German side. The author was on the staff there for the greater part of the war, latterly in charge of security.

No-one was sent to Colditz unless he already had a political or escaping record. In this fortress, therefore, were concentrated the toughest and most ingenious of all the Allied officers in German hands. Through the long war years there was no let-up in their
attempts to get out, nor in the efforts of Eggers and his staff to keep them in. Tunnelling, impersonation, disguise, attempted bribery of guards, forgery of documents and trickery of all kinds were continuous.

Into this entertaining and exciting book come a host of lively characters, many of them, like Douglas Bader, already known as tough, uncompromising individualists.

Howard Gee, the translator of this book, had the distinction of being one of the only two civilian internees in Colditz.

The book contains many insights with regard to the German mindset and also makes very interesting comments on the characteristics of the different nationalities incarcerated in Colditz - British, French, Belgian, Polish and Dutch.

The book confirms the essential veracity of the TV series within the licence needed to make an entertaining drama. Both had stood the test of time well and are highly recommended.

Colditz is perhaps the most famous of all the German prisoner of war camps but information about it has been truly scarce. Colditz: The German Story finally ends this drought and describes what happened inside and out by someone who actually experienced it first hand. With chapters focusing on everything from attempts by prisoners to escape such as tunneling, bribery and impersonation to the establishment of Colditz as a place renowned for taking in those who had an escaping record. Through detailed prose accompanied by maps of significance and shocking images, the book reveals the horrors of a truly horrific period in history. Reinhold Eggers was one of the men employed to keep the prisoners from escaping and it is his gripping story that has finally shed light on a place previously seeped in nothing but mystery.

Colditz, the more notorious of German's WWII prisoner of wars camps, housing the more harden and prolific prisoners who stories have already been widely emulated in books and film. No one was sent to Colditz without already having a political or escaping record, thus Colditz holding the more ingenious Allied offices. This narrative is told from the German side and how they kept them in. Eggers was first employed at Colditz in 1940 until the advancement of the Allied forces a few days before the end of the war. At first, Eggers was employed as a Duty Officer to be promoted later to a Security Officer. Eggers also had the advantages of English and French which gave him an insight to what the prisoners were talking about. The account that Eggers gives is chronological as they were witnessed that at times does mention the general events of the war. Moreover, there is also mention of political ideology which is natural considering that the prisoners were largely anti-German and anti-Nazi. However, Eggers gives his account with his own experiences from WWI. He personally viewed WWI as a war that should lead Europe and her people away from successive wars an learn them cooperation for the sake of survival. Between WWI and WWII, Eggers had personally made friends in Switzerland, France and England, showing his more international side. In 1933 and the onslaught of National Socialism and the political purge that Hitler ordered, Eggers himself was accused of being a pacifist and leftist. However he was still called upon for national service at Colditz which is ironic given his previous leftist accusation. What Colditz The German Story documents is a German view of the war told with an un-fascist approach. This is an excellent account of one man forced to serve a regime that he did not subscribe to. His account is well wrote and very informative, a must read for anyone interested in WWII.

Many books have been published about Colditz - the most famous German prisoner of war camps, but this is the first book to be published as seen from the German side. Only those who had a past record of attempting escape were sent to colditz, which means the camp held only the toughest and bravest of men.Throughout the many years of war, there were many attempted escapes and therefore many attempts to get the prisoners back, of which Eggers had to deal with. Many escape techniques were used; tunneling, impersonation, disguise, bribery of guards and even the forgery of documents - all of which were an ongoing struggle for Eggers to keep under control. This book is an enthralling read which contrasts the nature of German prisoner of war camps by noting how the General is a family man and enjoys gardening.

Colditz, the most famous of German prisoner of war camps was a place for political prisoners and prisoners with the most escape attempts, this led to the prison having the toughest Allied soldiers in Germany. The prisoners attempts included tunneling, impersonation, disguise and bribery to escape Colditz during the long war years. This book is written from Reinhold Eggers eyewitness accounts as he was a member of staff at Colditz, mostly in charge of security. This book is exciting and entertaining informing the reader of the desperation of prisoners to escape confinement and the men who constantly had to be on their guard to catch them, widely appealing for war historians, for historical studies or suitable as a narrative