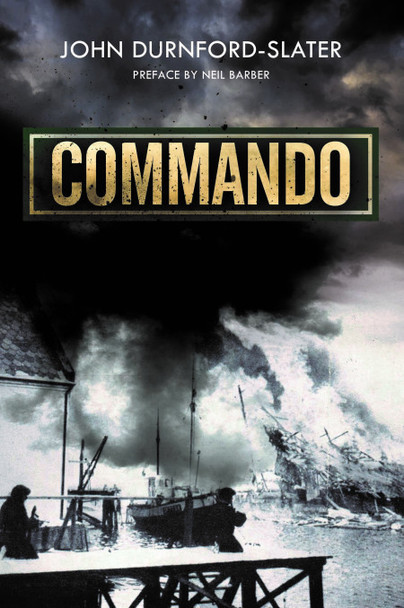 Memoirs of a Fighting Commando in World War Two

Add to Basket
Add to Wishlist
You'll be £13.99 closer to your next £10.00 credit when you purchase Commando. What's this?
+£4.50 UK Delivery or free UK delivery if order is over £35
(click here for international delivery rates)

Order within the next 1 hour, 43 minutes to get your order processed the next working day!

Commando is the real and exciting story of one of the most important units of World War II. The Commando unit played an important role in Britain’s successes and, here, Durnford-Slater gives his first-hand and unique point of view on everything that happened.

Brigadier Durnford-Slater raised and trained the first Commando unit in 1940, and Commando tells the brilliant story of an outstanding leader and some of the most courageous exploits of the Second World War.

In 1940, 3 Commando was created to harry opposition forces in raids impossible for regular army units. Durnford-Slater led No. 3 Commando on an exploratory operation in Guernsey in summer 1940, and never looked back after that. From there, No. 3 Commando orchestrated raids on the Loften Islands and Vaagso in Norway and Dieppe, as well as operations in Sicily, Italy, France and Germany.

The commandos were so effective at creating destruction that Hitler personally ordered that all fighters captured during these missions be executed. Despite this immense threat, the commandos’ spirit remained undented and extremely high.

This excellent, first-hand account explains the creation of Commando, the nature of their operations, the high level of camaraderie between the men and the effect that they had on the course of the War. It is an exciting and instructive guide to what really went on with Commando.


Immediately following the Dunkirk evacuation in 1940, Prime Minister Winston Churchill decided raiding parties should be formed and its troops trained to create a reign of terror down the enemy coastline, leaving a trail of German dead behind them. When the letter requesting volunteers, crossed Captain John Dunford-Slater desk he applied for a transfer, was accepted, and assigned to command and form 3 Commando.

John Durnford-Slater's book 'Commando' is a page turner as he describes 'No 3 Commandos creation, and the men who wore the green beret. Fighting alongside his men, often first ashore when there landing barges hit the beaches. Guernsey was its first raid where lessons were learnt. He describes the of street fighting in the Lofoten Islands, Norway. Later, he and his men were at the sharp end during the ill-fated Dieppe raid. Then Sicily and leapfrogging raids up the coast of Italy, hastening the German army's retreat. He was with them during D-Day landings and alongside them as they spearheaded its way across Franse and Germany.

He writes of his first-hand experience of training a unit and watch it grow from a raiding party into a battalion sized fighting. The work is well supported with illustrations and Maps, not only a page turner but also one is reluctant to put down.

Simply put, this book is both a nice read and an important source for understanding the early Commandos and their fighting methods. It was great idea of Greenhill Books to again print Commando.

Running to a couple of hundred pages this is an utterly gripping and compelling account of No 3 Commando, from its formation in 1940 until the end of the war. The Index reads like the regimental battle honours: Lofoten, Largs, Vaagso, Dieppe, North Africa, Sicily, Italy... and what comes across strongly is how the men just got on with things and stood up to the plate when they were needed.

This is a reprinted book by Greenhill Books, which tells the stories of the No.3 Commando unit and how it came about and how it participated in a number of raids and missions from Norway throughout the war and to the D-Day Landings. This book was first published in the 1950’s, it was an exciting book then and it’s still an exciting book now after all these years. In fact it’s very reminiscent of the old Commando comics of years gone by. Written by John Durnford-Slater, this is his first-hand account of the creation, development of the unit where we have a unique in-sight in to its missions and raids.

A couple of good things that stand out in this book is the great telling of the stories and adventures the unit went through considering everything was new. But the other good thing to come out of it is the comradery, team-work and respect not just between the officers in the unit but right down to the ordinary. This unity I would say is why the unit did so well and forged a positive way for it to work in future years and the commando’s to become such a successful unit. This was a thoroughly good read, and written well as I don’t normally prefer these types of book when they’re written by the person in charge. A book I would definitely recommend, a good blast from the past.

This work has much to offer anyone studying leadership and command. Durnford Slater sought intelligence, initiative and a sense of humour in his officers, perhaps recognising that sense of humour is the seventh core value of the Army. Every officer joined his unit as a subaltern, and every soldier as a private. He turned down Simon Fraser, Lord Lovat who would not relinquish his captain’s rank. His approach to paperwork and discipline will strike a chord with many ARRSE readers.

One glorious aspect of the memoir are the tales from the margins of military history, The punch-ups with Irish navvies and Royal Marines, the plot to blow up the German embassy in Dublin, booze ups in enemy territory, and the staged visits for VIPs to patrol no man’s land in Normandy against a controlled enemy. It turns over a corner of the rug under which much history is swept.

This book that should be of interest to any thinking soldier.

The book, republished by Greenhill Books, is still as fresh in 2020 as it was in 1953, at the time of its first release. I loved the humor and the tight narrative of war action, as well as the description of real Commandos legends, such as Lord Lovat or Mad Jack Churchill, a guy going into battle with bow and arrow and a claymore sword. David Niven, an intelligence officer in the Commandos, also peeps into his stories.

Durnford-Smith's account of the extraordinary contribution commandoes made to warfare, particularly in WW2, is the kind of story I was reading in my Lion and Tiger comics in the 1950s. Enthralling stuff, the stuff of legend!

For each generation of those with an interest in military history, this is a seminal work. A must read. Police officers with an interest in their past, will learn of the large numbers of their predecessors who met the challenge and served in this very early special forces’ unit.

Putting the initial "Special" in SF is the story of John Durnford-Slater and Commando 3 and the integral part they played in harassing German forces and giving a glimmer of hope early in the dark days of WW2 for the allies.

I Enjoyed everything about this book there was nothing I didn't like about the book.