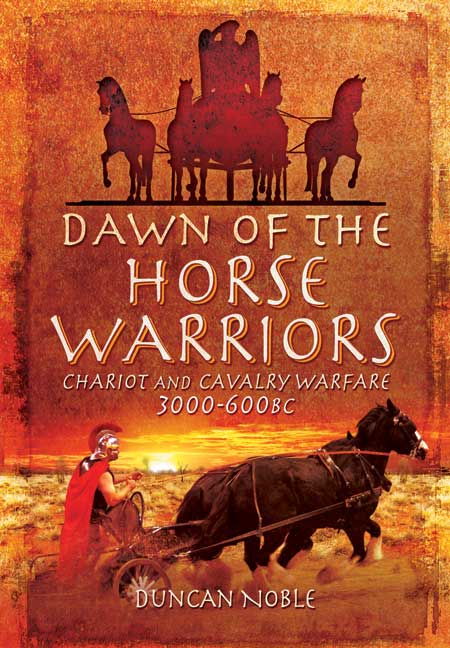 Dawn of the Horse Warriors (Hardback)

Add to Basket
Add to Wishlist
You'll be £19.99 closer to your next £10.00 credit when you purchase Dawn of the Horse Warriors. What's this?
+£4.50 UK Delivery or free UK delivery if order is over £35
(click here for international delivery rates)

The domestication of the horse revolutionized warfare, granting unprecedented strategic and tactical mobility, allowing armies to strike with terrifying speed. The horse was first used as the motive force for chariots and then, in a second revolution, as mounts for the first true cavalry.
The period covered encompasses the development of the first clumsy ass-drawn chariots in Sumer (of which the author built and tested a working replica for the BBC); takes in the golden age of chariot warfare resulting from the arrival of the domesticated horse and the spoked wheel, then continues down through the development of the first regular cavalry force by the Assyrians and on to their eventual overthrow by an alliance of Medes and the Scythians, wild semi-nomadic horsemen from the Eurasian steppe. As well as narrating the rise of the mounted arm through campaigns and battles, Duncan Noble draws on all his vast experience as a horseman and experimental archaeologist to discuss with great authority the development of horsemanship, horse management and training and the significant developments in horse harness and saddles.

Domestication of the horse revolutionized warfare by giving the military strategic and tactical mobility unprecedented; armies could now move with great speed and attack the enemy
by surprise. We first used the horse to tackle the chariots, and a second time as mount armed horsemen.

The author recounts the development of the first war chariots drawn by donkeys in Sumer based on
experimental archeology, before describing their golden years. He continues his story with the appearance of the cavalry regular among the Assyrians and the development of this weapon among the nomadic Scythians. Palestine to
Egypt, from Europe to China, this study encompasses all aspects of the use of horses in the wars of antiquity.

Overall this is an interesting read, and provides a good overview of the development and use of war chariots across two and a half millennium.

Not a difficult read, but one that requires you to pay attention in class. The tendency to read more like a summary of archeological discovery than a detailed treatise of ancient warfare isn't such a bad thing. In fact the appendices are useful in their own right.

This book is the work of an archaeologist who is also a skilled horseman, which comes across strongly when reading.

This book discusses horsemanship, horse management and the significant development of saddles and harness in considerable detail... This is a book for anyone interested in the cavalry arm because it explains its earliest origins and helps to put later troops (and much of their equipment) into context.

'A fascinating read that takes a look at the ancient warfare from a different perspective, this book is sure to appeal to both horse and history enthusiasts alike.'

Before becoming a full-time writer, Duncan Noble was an archaeologist whose specialization was in horses in the ancient Middle East. He collects swords and is a keen rider, currently training his fourth war horse on the Welsh moors. He lives in Herefordshire.