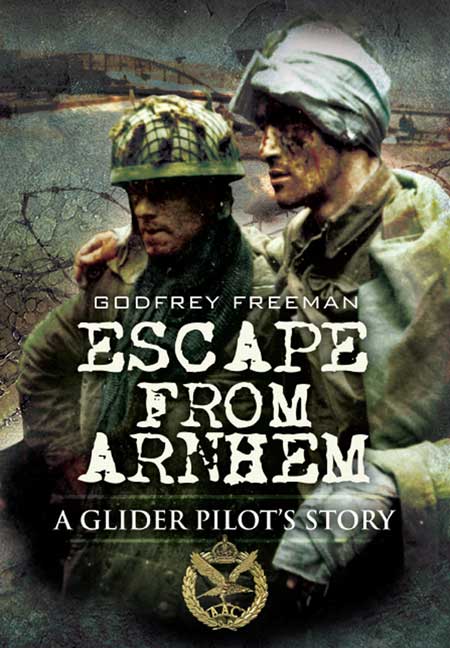 Click here for help on how to download our eBooks
Add to Basket
Add to Wishlist
You'll be £4.99 closer to your next £10.00 credit when you purchase Escape from Arnhem. What's this?
Need a currency converter? Check XE.com for live rates

This is the remarkable true story of a young army glider pilot’s experience of the last days in the defence of Arnhem Bridge, his eventual capture and then escape to be adopted by the Resistance, the hair-raising journey through occupied Europe and his eventual return to the UK.

After capture Freeman was first taken to Apeldoorn where he was hospitalized, claiming shell-shock. Although quite sane, he feigned trauma with escape in mind, until being punished for aiding the escape of four Allied inmates. Then he was put on a train bound for Germany, from this he escaped and eventual made contact with the Dutch underground. He is given civilian cloths and a bicycle and rides overnight to Barnveld where he stays with a schoolmaster and church organist. Then another cycle ride to a farm where he sleeps in the hayloft and finally still on his bike, he rides through the German front lines. He eventually is returned to RAF Broadwell by Dakota to resume his part in the war, from capture to freedom within a month.

The text is interspersed with flashbacks to the author’s childhood and early training, capturing the true spirit of a typical modest and yet outstandingly brave young man of the wartime era.

Godfrey Freeman was one of the few of that gallant band who, having landed in his glider, found himself fighting at the Arnhem Bridge itself under Lt. Col. Frost. It was here that he was taken prisoner by the S.S. on 20th September 1944.

In this well-written book, which is a joy to read, Freeman tells how brought up in the sheltered life of a country vicarage, where his father taught him Latin and Greek, he found himself a volunteer to the Glider Pilot Regiment at the age of 19. After his capture at Arnhem, Freeman claimed he was suffering from shell-shock and was taken to Queen Wilhelmina's summer palace at Apeldoorn, which had been turned into a P.O.W. hospital. Although quite sane, he feigned trauma with escape in mind but was punished after aiding the escape of four allied inmates. However, this did little to dampen Freeman's compulsion to escape and, after a further failed attempt, he and several others finally escaped by clambering down a fire hose.

After being housed by a Dutch farmer, he was contacted by the Dutch underground. He was given civilian clothes and a bicycle and had to ride straight through the German front lines, often travelling past large enemy patrols. He was finally rescued by a British patrol and returned to R.A.F. Broadwell to resume his part in the war; from capture to freedom in a month.

The text is interspersed with flashbacks to the author's childhood and early training, capturing the true spirit of a typical modest and yet outstandingly brave young man. Combined with a wicked sense of humour and an unwavering British spirit, Freeman's story is a fascinating narrative, brimming with suspense, doggedness and commendable high spirits in the face of adversity. All Glider Pilots underwent rigourous Amry drill on joining the Regiment and had to survive the usual ridicule of the Drill Sergeant Major. In Godfrey's case he was taunted once whilst on the barrack-square as "Freeman with the Rolls Royce accent and the Austin 7 performance!" His foot drill was probably no more deserving of criticism than the rest of the squad's and his performance later as a Glider Pilot and soldier was outstanding.

Godfrey Freeman attempted to join the RAF several times, but was turned down for having a depressed sternum. Instead he enlisted in the Ox and Bucks Light Infantry, and then fulfilled his flying ambition by volunteering for the Glider Pilot Regiment. The Glider Pilot Regiment gained a strong reputation, for not only were they fully trained pilots, but upon landing they also went into action as infantry.

Escape from Arnhem begins shortly after the fall of Arnhem Bridge, and follows Freeman into captivity. He feigned shell-shock, figuring that he would therefore be kept in hospital rather than sent to a Stalag, and thus would have a much better chance of escape. He was initially sent to a makeshift hospital at the Royal Palace of Het Loo near Apeldoorn. My own Grandfather, who was also wounded and captured at Arnhem, may well have been in the same place. He eventually escaped, and took part in the daring Pegasus escape across the Rhine, along with 120 other refugees. The Pegasus Operation was featured in Stephen Ambrose's Band of Brothers. One of the men who originally escaped with Freeman, Major John Coke, was killed in a later escape attempt.

Freeman's account gives us a very good impression of the experience of the Airborne soldiers who were captured at Arnhem. On a personal level I find this very interesting, as my Granddad talked very little about what happened to him. To read about the conditions, the relations with their German Guards, the medical care and the rations, helps to fill some of the gaps in my understanding. It is the crystal clear memories that Freeman imparts that make a book like this. Like his recollections of Major-General Urquhart being airsick in the back of his glider, and the hospitality afforded by Dutch people who sheltered the escapees.

I find it quite telling that Freeman had to be talked into compiling his memories by his friends and family - he feared sounding like a 'big-I-am'. His style of writing is very humble and matter of fact, which is important - these stories need no embellishing or glossing, indeed to do so would discredit them. So many books have been written about Arnhem, but none with such humility.