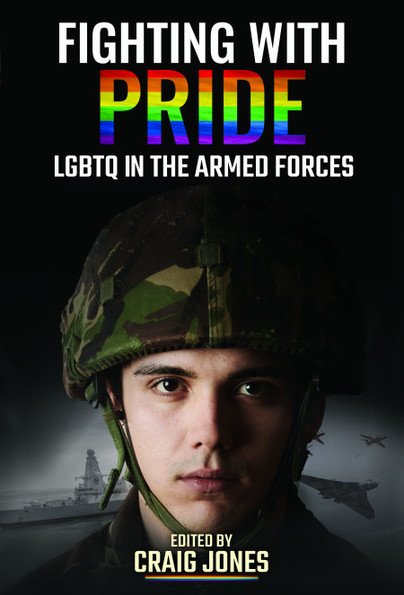 LGBTQ in the Armed Forces

You'll be £4.99 closer to your next £10.00 credit when you purchase Fighting with Pride. What's this?
Need a currency converter? Check XE.com for live rates

To mark the 20th anniversary of the lifting of the British Armed Forces ‘gay ban’ on 12 January 2020, this book brings together a selection of LGBTQ servicemen and women who have served in the Armed Forces since the Second World War. Their stories are profoundly moving testaments to their loyalty, their courage on the battlefield, and their unswerving sense of right and wrong.

Included are ten accounts of members of our Armed Forces who have lived remarkable lives. In some cases they were dismissed in disgrace or forced to resign when asked questions about their private lives. Their stories are those of remarkable sacrifice and courage in their units (and in battle), but who were forced to live in secret before their services were removed at the stroke of a pen after being declared 'no longer required’ or ‘dismissed in disgrace’.

These are the stories of the David and Goliath battle for equality, through every court in the UK and Europe. For others their story is one of remarkable careers at the front line of operations worldwide, with accounts of service in the Second World War, the Falklands War, the Gulf Wars and the war in Afghanistan.

This book celebrates the lives of servicemen and women who have stood tall and taken their place with pride and dignity in the fighting units of the Royal Navy, Royal Marines, Royal Air Force and the British Army. These are the inspiring stories of people who have created amazing careers and sought and found a welcome denied to so many.

This book makes for uncomfortable reading – which is also its appeal, as it brings home just how unpleasant it is to be on the receiving end of discrimination.

What is evident is in reality a blinding glimpse of the obvious; the Navy, and the other two services demeaned and threw away perfectly good people because of a flawed belief with no foundation in anything other than misconceived prejudice. The book is worth perusing; hopefully soon it will only be of historical interest.

Pick of the month

Exclusive preview on the Pen and Sword Blog

'The Armed Forces’ LGBT+ journey is remarkable by any analysis, but it is a great testament to the courage and strength of character of some who have shifted the ground upon which one of our nation’s most conservative organisations have stood. Through their perseverance, they have collectively realised a thoroughly normal goal – that each member of the Services should be respected and valued for who they are. Their individual stories are profoundly touching, some of which are captured within this important book, and if they say nothing else to the reader it is that huge mountains can be scaled if you focus on the goal, ground ahead and are unshaken by the scale of the challenge.

I and many around me took it for granted that we could serve our country. This collection of stories is a humbling reminder of those pioneering people from the LGBT+ communities who had to fight for that very privilege. The inspiring and poignant tales remind us of the highs and lows of serving as an LGBT+ person before the ban was lifted and celebrates the truly inclusive opportunities offered by the Armed Forces today. It has been a remarkable journey and this book is fitting tribute to how far we have come and to all those who made it happen.

An overdue account of the righting of an historic wrong; of indomitable spirit; and strength of character. I feel fortunate to have served alongside such courageous individuals in the front line of Britain's Armed Forces; and to have been one of those who had long argued for equity and justice.

These are inspiring personal stories of how LGBT+ service personnel challenged and overturned exclusion and discrimination in the military. They remind us that LGBTs in the Armed Forces were once tasked with defending freedoms that they were themselves denied. But thanks to their resilience, they are at last free and equal. Bravo!

This important book records a turning point in LGBT+ equality in the UK and the beginning and end of a remarkable journey for our Armed Forces. Resolute and determined, these are the stories of those whose journeys epitomise what was lost by excluding and what we have gained in equality.

Fighting with Pride is a captivating book chronicling an incredible period of positive change in the social history of the Armed Forces, told by the women and men whose courage on the battlefield was matched by their courage of conviction. These veterans of WW2, the Falklands Campaign, the Gulf Wars, Northern Ireland, the Cold War, Iraq and Afghanistan met every operational challenge demanded of them, yet many suffered the indignity of an imposed disgrace that led to dismissal. You will be moved by their unstinting loyalty to their Service and Country, with recollections that will make you laugh and shake your head in dismay and disbelief.

It now seems incredible that some of our dearest and best were compelled to live complex lives in the shadows for fear of arrest, detention and dismissal. The accounts of this wholly depressing experience, as told by Patrick Lyster-Todd and Elaine Chambers, remain worthy of somber reflection today. In stark contrast, Mike Brigham and Roly Woods’ contemporary accounts of the Armed Forces today reminds us (with some relief) how far we have come. Today we are proud to be all of one company, where equality truly means equality for all. But we would not be where we are without the protagonists for change you find in this uplifting book. Craig Jones deserves our thanks for skilfully bringing the stories of these women and men together. He is dismissive of his own naval career, but he fought a good fight to the betterment of the Armed Forces, and we are honoured to call him a brother in arms who believes in the power of fundamental good, the worth of responsibility and strength of example.

Marking the 20th anniversary of the lifting of the ban on gay servicemen and women in the Armed Forces, this collection of the stories of 10 LGBT+ personnel from the Second World War to present day forms a moving testament to their courage on, and off the battlefield.

Major Michael Brigham MBE is a serving infantry officer in the Mercian Regiment of the British Army.  Out, proud and serving at the front line of operations he has completed a number of combat tours in Afghanistan and received a Queens Commendation for Valuable Service in 2010.

Lt Elaine Chambers, Queen Alexandra’s Royal Army Nursing Corps, was a nursing officer in Cold War Germany but she was dismissed after being ‘found out’.

SLt Edmund ‘Ed’ Hall RN was a University Cadet Officer who ‘came out’ to colleagues in 1988 and was dismissed because of his 'intended lifestyle’, events which led him to become a campaigner for change in the law.

Lt Cdr Patrick Lyster-Todd RN joined the Royal Navy in 1972 and in a busy operational career he served in Northern Ireland, as the Navigating Officer of the last Chatham-based frigate and he was the Duty Staff Operations Officer in Faslane in the tragic hours following the bombing of Pan Am flight 103.

Lt Cdr Mandy McBain RN joined the Women’s Royal Naval Service in 1986. During her 25 year career she went from hiding her sexuality to representing the military at a NATO LGBT Conference in The Hague.

FLt Lt Caroline Paige RAF, is an inspirational woman and the first transgender officer to serve openly in the UK Armed Forces.

Cdr Roly Woods RN is currently serving in the headquarters of current Navy Operations, on the staff of the Royal Navy’s  Fleet Commander. He joined the Royal Navy in 1978 and served in the Falklands War and the Persian Gulf as well as a Defence Attaché and liaison officer in Washington DC.

Lt Cdr Craig Jones MBE RN joined the Royal Navy in 1989, later to become the first ‘out’ LGBTQ person the Armed Forces, leading that community through a bewildering period of change.