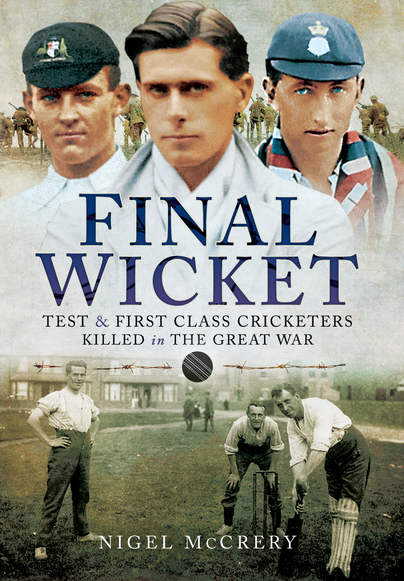 Test and First Class Cricketers Killed in the Great War

Click here to read the full article about Nigel McCrerys Final Wicket at Mail Online and here for The Telegraph article.

You'll be £4.99 closer to your next £10.00 credit when you purchase Final Wicket. What's this?
Need a currency converter? Check XE.com for live rates

While cricket remains a national game today, at the beginning of the Twentieth Century, it was THE national game. Cricketers were the sporting icons of their age, as footballers are today.

When the call to arms was made in 1914 and the years of war that followed, it was answered in droves by young men including Test and First Class cricketers. The machine guns and gas of the Western Front and other theatres did not discriminate and many hundreds of these star performers perished alongside their lesser known comrades.

The author has researched the lives and deaths of over 200 top class cricketers who made the ultimate sacrifice. He includes not just British players but those from the Empire. The enormity of the horror and wholesale loss of life during The Great War is well demonstrated by these moving biographies.

This book is clearly a labour of love for Nigel McCrery who has researched the lives, cricketing careers and untimely deaths in the Great War of the 275 first class cricketers from Britain and the rest of the Empire.
High production values make this a book to be treasured.

A real labour of love and a book that should be treasured.

'It is a tribute to the men who should never be forgotten and the author does them proud.'

As featured in the Chorley Guardian this enthralling book looks extensively at the lives, sporting careers and deaths of 275 first class cricketers who made the ultimate sacrifice during the Great War, including the fascinating story of four brothers, one of which received the Military Cross before he was killed in action.

As featured in the Wigan Observer this incredibly moving book fittingly celebrates the brave and talented sportsmen who made the ultimate sacrifice during the great War, author Nigel McCrery showcases their outstanding contribution to victory.

As featured in the Worcester News this incredibly moving account of the first class cricketers who made the ultimate sacrifice during the terrible conflict of the Great War. Brigadier General Walter Long even wrote of their "phenomenal courage" before they were bowled out by fate.

An immense amount of research has gone into the book, to garner details of the cricketers’ lives, their families, how they died and where they are buried. The fact that there are only nine without a photograph is testimony to the painstaking work that has gone into making the book as comprehensive as possible.

Nigel McCrery is no stranger to this type of subject having also written Into Touch – Rugby Internationals killed in the Great War. Both must have involved a vast amount of research as, in Final Wicket, each of the deceased is given a very thorough write-up with, in all but a few cases, an accompanying photograph...That said, he has done very well to obtain as many photographs as he has. Perhaps one of the book’s greatest assets is, where available, the plot reference of the grave is given. Sadly, many bodies were never recovered or identified but Nigel’s excellent research has ensured that mentions on memorials are also noted in the appreciations.

Further commendable details mentioned are the players’ ranks, battalion/regiment, date of death, age and counties/clubs represented. Their First-Class details are also mentioned at the end of each profile but the book expertly combines both the fighting and cricketing careers of these valiant men. Final Wicket is a most interesting and welcome addition to the subject of cricket and the Great War and Pen & Sword have produced a beautifully-crafted work.

'... a fascinating thick tome chronicling the stories of 275 Test and First-Class cricketers...'

As featured online in