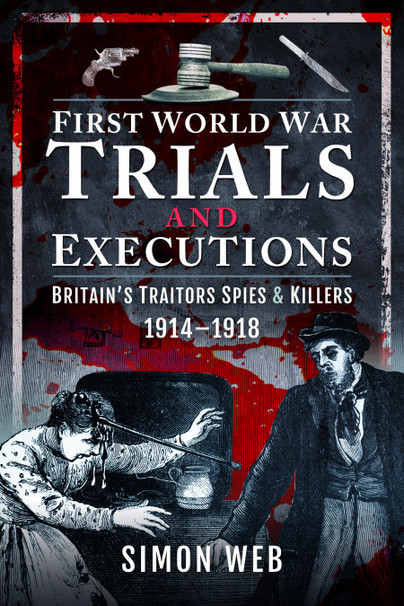 Add to Basket
Add to Wishlist
You'll be £10.39 closer to your next £10.00 credit when you purchase First World War Trials and Executions. What's this?
+£4.50 UK Delivery or free UK delivery if order is over £35
(click here for international delivery rates)

Between the beginning of the First World War in the summer of 1914 and the armistice in 1918, 51 men were executed in Britain. The great majority, over 80%, were hanged for murder, but in addition to this, 11 men were shot by firing squad at the Tower of London. One traitor and one spy were also hanged.

Traitors, Spies and Killers tells the story of the most interesting and noteworthy of these executions and the crimes which led up to them. Most books about true crime focus upon the crimes themselves and the trials which followed them. In this book, Simon Webb explores in detail the fates of the condemned men, examining what happened to them after their trials and the circumstances of the executions. This makes occasionally for harrowing reading.

Trends in murder are also examined. For instance, a third of those executed for murder during the First World War had used cut-throat razors to dispose of their victims; a type of crime unheard of today. Others used pokers and axes, which are also exceedingly uncommon murder weapons in the twenty first century.

This is a book which will fascinate and horrify those with an interest in crime and the death penalty.

5 stars- This book follows all the criminals of the first world war including traitors spys and even killers! You even get to know how many of them people were excutued and the fact it was actually 51 men executed in England. Most of those executed ended up being hanged, 80 percent of these were for murder and some for espionage but they was shot, and only one traitor and one spy was hanged during this time period. Some chapters were even used for the executioners so you find out more about them and why they ended up stopping there job etc it was really interesting.

This book goes in depth into the murders and subsequent executions during the years of 1914-1918. It is suitably grisly. Webb discusses diverse techniques of murder, from razors, axes, pokers, to beatings, as well as looking into non-fatal crimes, such as espionage.

The other main subject in the book, though, are the executions themselves. Webb treats the issue with great care - we are taken to the gallows to witness the deaths with the executioners (particularly John Ellis). It is an interesting aspect of crime that is often overlooked, particularly since Britain abolished the death penalty decades ago.

This is a fascinating book. Webb has clearly researched the subject fastidiously, and his style of writing is very accessible. I sometimes find non-fiction can be quite dry, but this book is nothing of the sort. I read it in only a couple of sittings.

I’ve read a few books by this author and I liked them a lot. First World War Trials and Executions by Simon Webb* is a book about Britain’s Traitors, Spies and Killers, 1914-1918, as the subtitle suggests. It is a less known subject and, of course, I found it fascinating.

The book tells the story of the persons who were executed during the Great War. From the 51 men, the book contains the stories of about half of them, the most interesting ones, according to Webb. I imagined, before reading the book, that the majority were executed for treason, but it was not like that at all. Sometimes we forget that real life and other things happened during the war and not everything bad that happened at that time was war-related. Some of the murders described in the book are really gruesome.

I liked the short descriptions, of only a few pages for each individual. The stories are presented in chapters, according to the murder weapon, and, of course, the spies have their own chapter too. I think it’s better like that instead of presenting it chronologically as the period is very short anyway. Each chapter starts with a description of how the murders happened in general, which is useful considering that we are not familiar with the weapons used at that time, such as razors, axes, or pokers. All these items were common in all houses, as men used razors for shaving, axes to cut the wood for the fire, which was the main way people were heating their homes at that time, and pokers were too very common, to rekindle the fire.

It’s not a pleasant read, of course, some bits are graphic, but this is to be expected when it comes to murders, doesn’t it? I would highly recommend the book, it’s fascinating.

Enjoyed reading Simon Webb's fascinating history of an area of World War I that does not get much attention. While there are tons of books about the war published every year, this is one to read. I will recommend that my library purchase a copy.

I really enjoyed this book!

I have a passion for true crime books and after reading the blurb for this book I knew that it would tick the boxes for me. I was really keen to get started on the book and had it read from cover to cover within a few hours of it landing on my Kindle.

I liked the layout for the book and it was interesting to see the trends in the murders and crimes that had been committed. I was really surprised when reading it to see that there was only the one murder I was aware in detail previously in the book too so it was great to pick up a book of this nature, that covers a period I enjoy that actually had new things for me to read.

I knew a little about those that had been executed at the Tower of London from books I have previously read but this one contained a lot more detail and was really interesting to me. I knew about one of the bullets being a blank so none of them firing would know who had actually had a fatal shot when a firing squad was used, but wasn’t aware that it feels different when a blank bullet is fired so they actually would have known all along!

It is 5 stars from me for this one, I loved the step back in time and the variety and details of the crimes committed – very highly recommended!

Where does one even begin with such a fascinating topic? Simon Webb has written about completely different perspectives than typical history books. He has researched the last moments of many who were executed, nearly all men, in England between 1914 and 1918; some were stoic, some terrified out of their minds and some resolute. Not only that but he describes the crimes, trials and manners of execution in vivid detail.

Considering the era, murder methods during the time were different in ways than they are now. Murder is often committed with implements at hand and then the most oft used was the "cut razor". The term is no accident. Other methods described include fireplace pokers and drowning. At times the conviction was obvious but that was not always the case. So many stories stand out in my mind but two in particular include a man who literally tried to run to his execution to get it over with and another of a man known by the executioner. Also described is where the prisoner spent his last night and why.

What intrigued me most were the last moments of those executed, how they interacted with guards, what they ate for breakfast and their walk to the scaffold or the shooting "gallery". Prior to read this book I hadn't thought about the executioner mentally (and sometimes physically) measuring the person's height, weight and neck in order to calculate the "drop" for a clean death. Two executioners were discussed in particular, especially a man called John Ellis who often visited his "clients" incognito to alleviate the stress of measuring in person. The author also describes the 30+ meter walk to death which must have felt like forever and the procedures involved in hanging and shooting (for those in the military). We are also told the salary for executioners then and the heavy weight an executioner carried. It all sounds positively morbid but it is riveting information.

The grisly descriptions are not for everyone but it is a highly interesting topic to those who wonder about the mechanics and processes of the death penalty.

Webb presents the real-life stories of thirty-one trials that occurred during World War One in Britain, from 1914-1918. Each of these trials, separated in the book by murder method or type of offense, ended in execution. This book details the experiences of each man chosen for execution (there were no women on trial for murder during this time period), from sentencing to execution, and recounts the activities that took place in the cell of the confined and also during the execution.

First World War Trials and Executions: Britain's Traitors, Spies and Killers 1914 – 1918 is a well researched book from the historian of Simon Webb. The book as it says in the title investigates all those the state put to death for various reasons and gives a short picture of the reason why and how they were executed.

What Webb does tell us that during World War 1 the number of executions fell, and that in all a total of 51 men were executed in England. Most of those executed were hanged, 80% of those were for murder, and a small number shot for espionage. Only one spy and one traitor were hanged during this period.

The book neatly brings those with similar crimes together in one chapter, so those that used cut-throat razors for example, seven men, told who they were, who the crime is committed against and where their execution was carried out. They do this for all the chapters, so you are able to dip in and out of the book.

There are also short chapters about the Executioners which is rather interesting and how they came to the position and why they left. For those of a gorier bent there is also a chapter on The Mechanics of Hanging.

This is an interesting, short history book that has been well researched, well written and an ‘entertaining’ read that you can consume quickly. A book for all those interested in historic crimes and how things used to be.