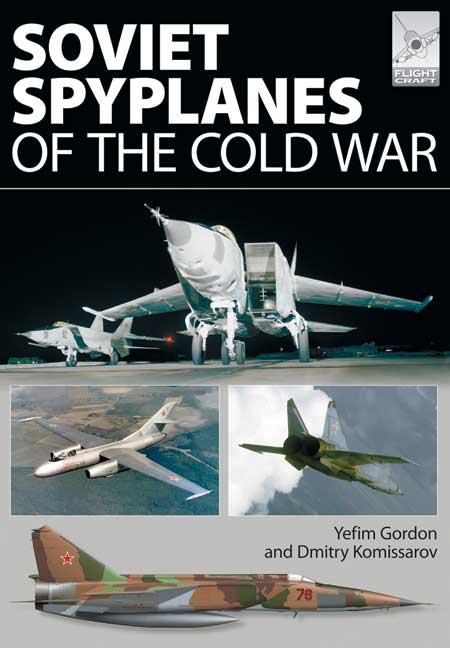 Click here for help on how to download our eBooks
Add to Basket
Add to Wishlist
You'll be £4.99 closer to your next £10.00 credit when you purchase Flight Craft: Soviet Spyplanes of the Cold War. What's this?
Need a currency converter? Check XE.com for live rates

'Spy in the Sky' matters have long been a source of interest and fascination for aircraft enthusiasts, historians and modellers and none more so than the elusive and secretive Soviet types of the Cold War era. Yefim Gordon presents us here with a range of such types, presenting a collection of photographs, profiles and line drawings together with supplementary text detailing the history of each craft, encompassing the various developmental milestones, successes and pitfalls experienced along the way.

The Soviet Union's two dedicated spyplane types, the Yakovlev Yak-25RV 'Mandrake' (the Soviet equivalent of the Lockheed U-2) and the MiG-25R 'Foxbat' are profiled, supplemented by details garnered from a host of original sources.

Well-illustrated histories and structural analyses are set alongside detailed descriptions of the various plastic scale model kits that have been released, along with commentary concerning their accuracy and available modifications and decals.

With an unparalleled level of visual information - paint schemes, models, line drawings and photographs - it is simply the best reference for any model-maker setting out to build a variant of this iconic craft.

This first entry in a new Flightcraft series looks at two Soviet spy planes [the Yak-25RV and MiG-25R]. For each aircraft we get a development history, a look at its service record, a detailed description of the type and a review of the available models. These are supported by an excellent selection of photographs and plans, including pictures of the real aircraft and of well-built models, top, side and front line plans and side drawings showing various colour schemes.

Various interesting details about the era in which these spy planes flew, which even I had not encountered before, are in this book full of pictures.

With the detail photos of the real thing from examples now in museums, this will be an excellent modellers reference. The final section has some fine colour profiles. As the first title in this new series, this is neatly done and promises well for additional titles to follow.

No Soviet aircraft modeller should be without this book.