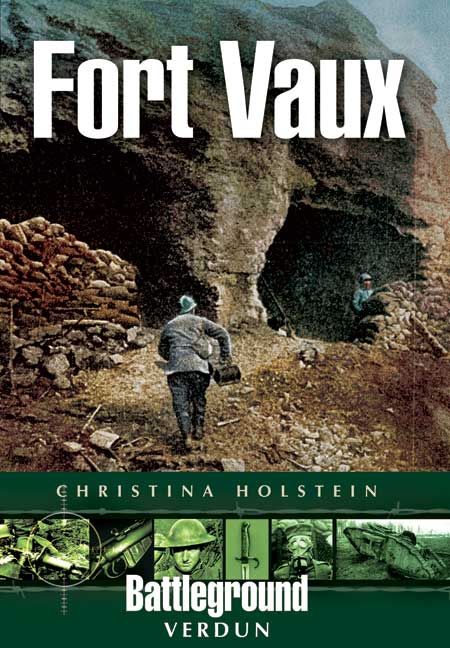 You'll be £4.99 closer to your next £10.00 credit when you purchase Fort Vaux. What's this?
Need a currency converter? Check XE.com for live rates

The bitter fight for Fort Vaux is one of the most famous episodes in the Battle of Verdun - it has achieved almost legendary status in French military history. The heroic resistance put up by the fort's commander, Major Raynal, and his small, isolated garrison in the face of repeated German assaults was remarkable at the time, and it is still seen as an outstanding example of gallantry and determination. But what really happened inside the besieged fort during the German attacks, and how can visitors to the Verdun battlefield get an insight into the extraordinary events that took place there almost a century ago? In this precise, accessible account, Christina Holstein, one of the leading authorities on the Verdun battlefield and its monuments, reconstructs the fight for the fort in graphic day-by-day detail. Readers get a vivid sense of the sequence of events, of the intense experience of the defenders and a wider understanding of the importance of Fort Vaux in the context of the German 1916 offensive.

The story of Fort Vaux makes for fascinating reading and the surviving but heavily damaged structure is open to visitors today. Some elements of the fort, especially the underground tunnels still collapsed and inaccessible to the public, t you still get a really good idea of the fort from the parts you can enter. Throughout the book there are many period photos, plus maps and modern day photos illustrating what can still be seen, including some showing the damaged tunnels that you are unable to enter within the fort itself. Having visited Fort Vaux myself, I have to say it is a fascinating place to see, and the craters and damage to it show quite clearly how it must have been such a frightening place to have been during the fighting/shelling. Well worth the visit if you are in Verdun.

Christina Holstein has written an excellent and most welcome account of the bitter struggle over Fort Vaux...which joins an already stellar cast of Battleground Europe guides from publishers Pen and Sword.

The author provides a first-rate day-by-day account of the defence of the fort between 2nd and 7th June 1916. The author's excellent research (including use of both French and German sources), results in the best account of the fighting force in Fort Vaux since Alastair Horne's The Prince of Glory. As with the other books in the series, the text is accompanied by some excellent comtempory photographs many of which I have not seen before. The 16 colour photographs, most of which are of the site as it is today, are also good. As far as I am aware, this is the only book in English about Fort Vaux, so it is worthy of consideration even if you have no plans to visit Verdun.

Another in the publisher's excellent 'Battleground' series, this time dealing with the Verdun area. This guidebook-cum-history deals with the bitter fight for Fort Vaux, which has achieved something of a legendary status in French military history. Here one of the leading authorities of the Verdun battlefield provides a precise and accessible account of the sequence of events within the context of the 1916 German offensive. Heavily illustrated. Excellent history and guide 10/10.

This is an excellent account of a short but important battle.

The author, Christina Holstein is one of the leading authorities on the Verdun battlefield and its monuments, and in this new book she offers a precise, accessible account of the fight for the fort, providing a graphic day-by-day narrative of the actions involved, which includes all the background information readers may require to better understand the importance of the battle for Fort Vaux played in the wider German offensive of 1916, itself a key aspect of WW1. The 208-page book is packed with black and white photographs showing the key military figures involved in the planning and execution of the attack and the defence of Fort Vaux, as well as photographic evidence of the fighting at the time and showing the area as it is now. Additional information is provided to allow the reader to conduct walking and driving tours of the fort and the battlefield. All in all a fascinating read.