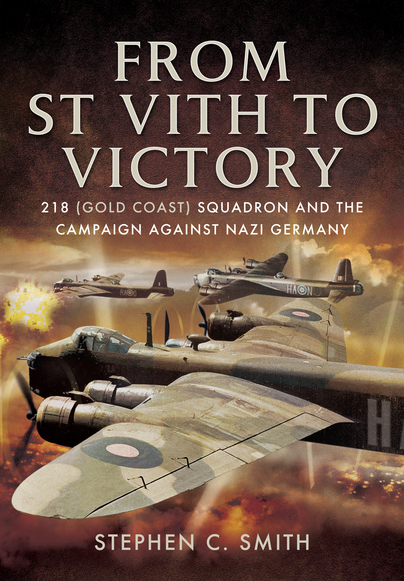 From St Vith to Victory (Kindle)

218 (Gold Coast) Squadron and the Campaign Against Nazi Germany

Click here for help on how to download our eBooks
Add to Basket
Add to Wishlist
You'll be £4.99 closer to your next £10.00 credit when you purchase From St Vith to Victory. What's this?
Need a currency converter? Check XE.com for live rates

Compiled from a variety of sources and first-hand accounts, this book is an authoritative record of the part played by No.218 (Gold Coast) Squadron during the bomber offensives of World War II. The squadron's activities are described in detail offering a unique insight into the lives of those involved and saluting the important role that No.3 Group and No.218 Squadron played in Bomber Command's ultimate victory.

No.218 Squadron was formed a few months before the Armistice which brought to a conclusion the Great War. Disbandment soon followed, rendering the squadron number plate dormant until the rise of National Socialism in Germany. The squadron was reformed in 1936 and spent the remaining peace time years honing its skills, skills that would be tested from the very first day of the bomber offensive against Germany to the very last.

This book is based on detailed research and includes many monochrome images. It will appeal strongly to anyone with a connection to 218 (Gold Coast) Squadron but it is also an important part of the wider history of Bomber Command through WWII. Strong appendices greatly compliment the story. Recommended.

It makes interesting reading to discover the details of the aircraft and the aircrews as they fought throughout the war.