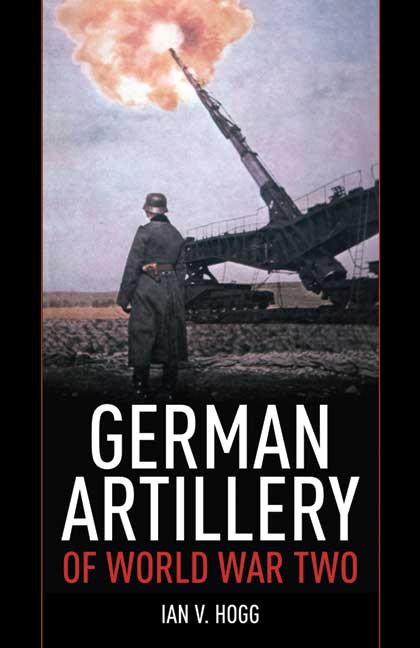 Click here for help on how to download our eBooks
Add to Basket
Add to Wishlist
You'll be £4.99 closer to your next £10.00 credit when you purchase German Artillery of World War Two. What's this?
Need a currency converter? Check XE.com for live rates

German Artillery of World War Two also contains details of the general organisation of the German artillery arm, together with development histories of the weapons and their ammunition. In addition, the book contains a series of comprehensive data tables, and appendices including a glossary of technical terms.

The first edition of this book, published over twenty years ago, is highly sought after by collectors and enthusiasts today. This new edition brings an enduring classic to a new generation of readers.

“These deep in depth details are complemented with photographs”

“This book is a veritable lexicon of German weapons and munitions”

'For military researchers and collectors of militaria this book is
definitely a 'Hole in one!'

First published way back in 1975, Ian Hogg's reference on German Artillery remains, in my opinion, the best reference there is to this day about the guns and ammunition used by the German armed forces in WW2. Originally published then by Arms and Armour Press, it has been difficult and often expensive to find in recent years. Great news then that Frontline Books, part of Pen and Sword Books, have re-printed it in a paperback format. The book is organised into section covering the Organisation of German Artillery in WW2, then splits into Infantry, Mountain, Field, Heavy Field, Heavy, Railway, Anti-Aircraft, Anti-Tank, Coastal and Recoilless Artillery. The appendices cover Ammunition, Ammunition Markings, Identification of German Artillery Cartridge Cases, Fremdengerat (an intelligence list of foreign weapons with designations) and finally an explanation of the Wehrkreis Organisation in Germany. Each gun has technical details and brief history, along with photos wherever possible. If you want to find out about any German artillery piece, this really is still the best place to do it. Over the last thirty years we have seen lots of new information emerge on WW2 but this remains a great reference for your bookshelf.

The best reference there is to this day about the guns and ammunition used by the German armed forces in WW2. If you want to find out about any German artillery piece, this really is still the best place to do it. This remains a great reference for your bookshelf.

A classic on modern artillery by Ian V. Hogg this volume is well-established and must be regarded as a standard reference work on the subject.

This is both a valuable reference book and an absorbing read.