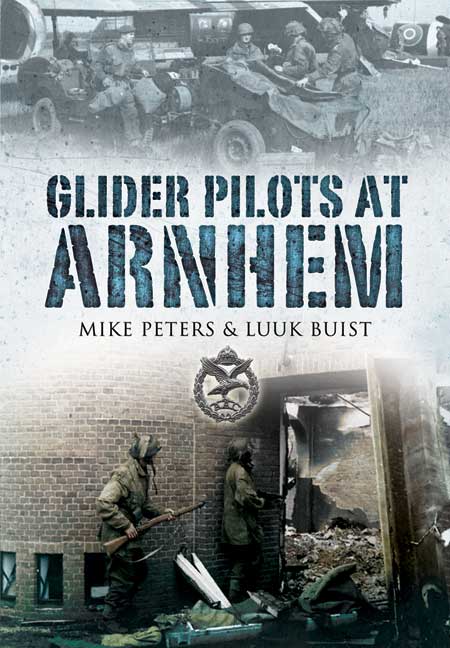 Click here for help on how to download our eBooks
Add to Basket
Add to Wishlist
You'll be £4.99 closer to your next £10.00 credit when you purchase Glider Pilots at Arnhem. What's this?
Need a currency converter? Check XE.com for live rates

The fierce struggle between the British 1st Airborne Division and the superior German forces in and around Arnhem is well documented. This book tells of the role played in the battle for Oosterbeek and the bridge at Arnhem itself by the men of the Glider Pilot Regiment (GPR). These men were already experienced soldiers who volunteered to join the airborne forces and take the fight to the Germans in a totally new regiment.

The men of the GPR were predominantly SNCOs trained to fly wooden assault gliders into occupied territory. Once on the ground they were expected to go into battle with the troops they had delivered onto the Landing Zone. During the Arnhem operation they were involved in the initial defence of the LZs, before fighting house to house leading mixed groups of infantrymen, engineers and medics. In so doing they suffered extensive losses from which the Regiment never fully recovered.

This book tells their story in their own words from the moment they landed on Dutch soil through the fierce fighting all around the ever shrinking perimeter until the survivors of the GPR proudly marked the route out for the battered survivors of 1st Airborne Division as they escaped over the Rhine.

The new paperback edition incorporates a number of amendments and updates to its very detailed appendices. The inclusion of this new information enhances what was already a comprehensive stand alone source of information on Operation Market Garden and the role of the GPR in the airborne landings of September 1944.

This book offers a lot of interesting background information about unique days in the military history.

The research is impeccable, the writing very readable, the illustrations first class. This book is a must for anyone with an interest in airborne forces and vertical insertion of troops, essential to anyone wishing to understand the fight from Normandy to German soil. it is an inspiring story and an absorbing tale. There really isn't much else a reader could expect of a book, except a great price, which it is.

The new paperback version incorporates a number of amendments and updates to its very detailed appendices. The inclusion of this new information enhances what was already a comprehensive standalone source of information of Operation Market Garden and the role of the GPR in the airborne landings of September 1944. The new size and lighter weight also make it an ideal companion for those who like to wander the landing zones outside Nijmegen and Arnhem.

The Eagle (Journal of the Glider Pilot Regiment)

If you have an interest in airborne forces this is a must have.

There is a vast literature on British airborne operations of the Second World War and a seemingly unquenchable thirst for new books on that aspect of the war. Quality can be variable also. However, this book allays any fear of repetition or superficiality; the author has certainly done the legwork to shed new light on well-trodden paths.
This book takes as its core the testimony of veterans and participants. This is indicative of the trend in popular history publishing now well established; the great expansion in family history research has created a greater interest in individual soldiers than the big battalions. Even relatively recently works focussing on the endeavours of individual soldiers were perceived to be primarily niche works of most interest to fellow participants or members of the same regiment. Sir John Keegan’s The Face of Battle; Lynn Macdonald’s books on the First World War and the continuing popularity of the Pals series from Pen & Sword shows a continuing interest.
Mike Peter’s book is all the more astounding in that he is a serving Army Air Corps officer who has completed this vast tome in between periods of active service, assisted by local Dutch researcher Luuk Buist who corresponded with many veterans over the years. By any standards it is a towering piece of research.
An opening chapter charts the development of glider forces in the British Army – this has been recorded elsewhere and in books recently republished, but this is excusable if one accepts that some purchasers will do so just for the Arnhem angle; this and the subsequent chapter which covers the repeated preparations for and cancellations of airborne operations as the Allied armies broke out of Normandy. The chapter title ‘A long summer of frustration’ is particularly apt. There would be one key difference between the Glider Pilot Regiment’s experience at Arnhem, they would have to stay and fight alongside the infantry; as the armoured column of XXX Corps bogged down in the fight up ‘Hell’s Highway’ the GPR’s soldiers would suffer high rates of attrition. This would have far-reaching effects for the rest of the war; as the author notes in the subtitle to Chapter 19 – ‘The Glider Pilot Regiment had almost ceased to exist’.
As we move into the substantial core of the book, we find that the title of the book could mislead, but the revelation is a good one; this is not a narrow focus on pilots, the operations orders and the testimony and accounts of the troops they carried have been reviewed just as diligently. The mechanics of the battle are well known, but the personal accounts of the glider pilots are genuinely illuminating and in many cases seen here for the first time. If only for this, the authors have done a service for future scholars. Yet the research in primary sources beyond personal accounts is also first class; yes, documents on glider loads, flight schedules for each of the lifts and so on are well known and have been available for some time; but they have been put to excellent use here. It is an easy thing to do – throw in a seemingly random statistic as if to say ‘I got the documents out’; it is another altogether to have a seemingly simple statistic which illuminates the argument – yet was the result of many hours work. There are many examples here. Yet the writing is clear, and a good narrative that rewards actual reading…If you have an interest in airborne forces this is a must have.

If you have to buy one book this year on World War Two – make it this one.

A glance at the select bibliography in Glider Pilots at Arnhem by Major Mike Peters and Luuk Buist reveals just how much is in print on the Glider Pilot Regiment and their activities at Arnhem in 1944. I have always admired these brave senior NCOs who flew and landed those plywood death traps and then stayed on to fight and die or face capture by the Germans. The authors of this excellent, highly detailed book have tapped many other sources including some 50 war diaries and other original reports held at the National Archive and personal memoirs and memories of those who survived. The appendices present a wealth of information including an alphabetical nominal roll of all Glider Pilot Regiment personnel who served on Operation Market Garden giving PoWs, casualties and another contains all honours and awards with citations. A remarkable record, that also happens to be a very well written and absorbing account of the GPR at Oosterbeek and at Arnhem.

‘This book stands as a milestone in the history of the battle of Arnhem.’

Glider Pilots took an active part in every area of the Battle of Arnhem mostly working together with troops from every element of the airborne division. Therefore they are mentioned in nearly every publication about Arnhem. What until now has been missing, has been a written study in a broad and systematic style, of the role of this important unit. This gap has been filled with the issue of ‘Glider Pilots at Arnhem’. The book tells their story in detailed but very readable style. The authors mix their historical story with a very large number of personal accounts from glider pilots, of which the majority have never been previously published. The maps of Oosterbeek and its surroundings are extremely informative, whereon day by day the positions of various elements of the Glider Pilot Regiment are given. As will be seen the authors have also succeeded in tracing a number of previously unseen photos.
No less than twelve highly detailed appendices end the book. Some of these, such as the ‘summaries of allotment of personnel – vehicles and 6 pounders to gliders.’ And the ‘Air Load Manifest – Operation Market Garden’ give a detailed insight into the loading of the gliders and the RAF squadrons who towed them.

All in all it is an interesting account of one of the lesser known airborne regiments and a refreshing take on the much-examined airborne operation. Anybody with an interest in airborne warfare would do well to read it.

Iâ€™ve just finished reading â€œGlider Pilots at Arnhemâ€ by Mike Peters. Until now little has been written about this regiment â€“ the shortest-lived regiment in the British Army. This book is well-researched, easy to read and is testament to the men that served within it. One is left with immense respect for the men of the GPR: they were â€˜total soldiers.â€™ If youâ€™re going to read about Arnhem, after Martin Middlebrookâ€™s â€˜Arnhem 1944,â€™ this book must be the second on your reading list â€“ you wonâ€™t be disappointed.

Update Required To play the media you will need to either update your browser to a recent version or update your Flash plugin.
YouTube videos are unavailable because you have chosen to turn off third party cookies for enhanced content. Visit our cookies page to review your cookie settings.