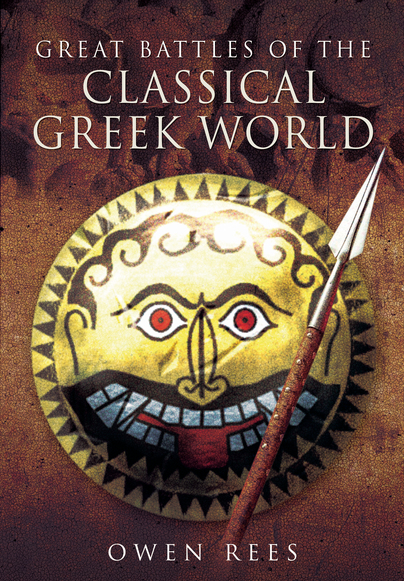 Click here for help on how to download our eBooks
Add to Basket
Add to Wishlist
You'll be £4.99 closer to your next £10.00 credit when you purchase Great Battles of the Classical Greek World. What's this?
Need a currency converter? Check XE.com for live rates

This book presents a selection of eighteen land battles and sieges that span the Classical Greek period, from the Persian invasions to the decline of the traditional hoplite heavy infantry before its ultimate demise at the hands of the Macedonians. Whilst focusing on the golden age of the hoplite phalanx, Owen Rees also offers a wider perspective on classical battle, including mercenary armies and the rise of light infantry. A strong emphasis is placed on the variety of tactical developments throughout the period.

Each battle is set in context. The background, battlefield, and opposing forces are discussed, before giving a narrative and analysis of the fighting. The discussion of each battle also deals with the aftermath of the engagements and the strategic implications for both the victors and the defeated. The text is supported by dozens of tactical diagrams that show the deployment of troops and the various phases of each battle. Written in an accessible, narrative tone, a key feature of the book is the author’s choice of battles, which collectively challenge popularly held beliefs such as the invincibility of the Spartans and the ineptitude of the Greeks at Sieges.

Overall, Rees’s book is well supported with tactical diagrams through each chapter. Rees is also willing to challenge popularly held beliefs, such as the invincibility of the Spartans.

I have no hesitation in recommending this book to those interested in Classical Greek Warfare or the development of Hoplite tactics. The short chapters make the book the perfect companion with a fine coffee and a spare 20 minutes. The book itself has inspired me to look further into Greek warfare again and to start a collection of Ancient Greek armies to wargame these battles.

Owen Rees`s Great Battles is a great read - even more so considering it is his first book. I recommend it to everyone passionate about classical Greece or even the ancient world in general. Military historians especially may be impressed by his vibrant retelling of intrigue, fanatical courage, and twists of fate on the classical Greek battlefield.

I eagerly await the release of his companion volume: Great Naval Battles of the Ancient Greek World.

A concise summary of some of the great battles that gives a good insight into the more complex details in the background that lead to each conflict backed by extensive use of contemporary material.