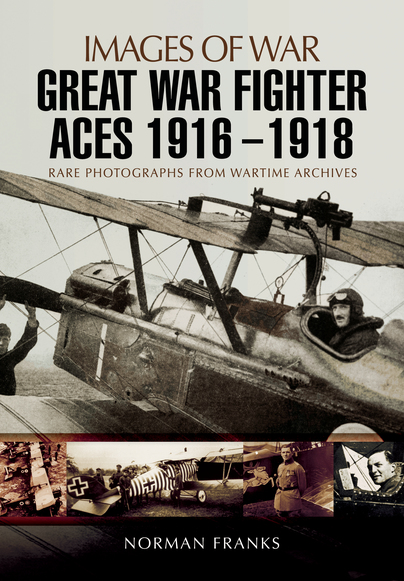 Click here for help on how to download our eBooks
Add to Basket
Add to Wishlist
You'll be £4.99 closer to your next £10.00 credit when you purchase Great War Fighter Aces 1916 - 1918. What's this?
Need a currency converter? Check XE.com for live rates

By the close of 1916, the air war over France was progressing amazingly. The Royal Flying Corps, the French Air Force and the opposing German Air Service, were all engaged in fierce aerial conflict and the Allied air forces were following a particularly successful if aggressive policy. They were taking the war to the Germans by constantly crossing the massive trench system that stretched from the North Sea to the Swiss border. With observation and bombing aircraft requiring constant protection from the German fighter Jastas, the fighter aces on both sides soon gained publicity and fame as a result of their daily engagements.

This book explores the many ways in which fighter pilots developed tactics in order to outdo the opposition in the fight for allied victory. In so doing, they achieved high honours on account of their prowess in the skies. It also looks at the development of militarised flight during the course of these key years, revealing how each side constantly endeavoured to improve their aircraft and their gunnery.

By early 1918 the Americans were also starting to take part in the war against Germany, and any number of US citizens were joining both the French Air Service as well as manning their own Aero Squadrons. This publication covers the development of American air combat, whilst also recording the efforts of some of their ace pilots flying both British and French aircraft with precision and skill.

The photographs are accompanied by an excellent and comprehensive text from respected aviation historian Norman Franks.

Each image is captioned with extensive background information.

This book explores the many ways in which fighter pilots developed tactics in order to outdo the opposition in the fight for allied victory. In so doing, they achieved high honours on account of their prowess in the skies. The book features many photographs of Aces and their aircraft.

The Pen & Sword Images of War series is a wonderful range of books with many photographs. I love the series as a great source for scale modeling.
This particular title, Great War Fighter Aces 1916 – 1918, deals with the last 2 years of the Great War. I particularly like the many photos depicting the various aircraft models used in that period, although the emphasis is on the portraits of the ‘aces’ of course.

The format of these books is ‘lots of photos with extensive captions’, interspersed with a few textual parts starting each chapter. Although the texts are not very long, they are concise and covering a lot of the organization of the units and their members.
So one can learn what units were involved where, their composition and used aircraft types, and of course who was flying with which unit.

As mentioned before, the emphasis of the book is on the aces, the pilots with the most ‘kills’, and that’s fine. Also because there are quite a few pilots mentioned that are less well known. This is not only about the Richthofen’s, Guynemer’s and other famous aces!

At less than 10 British Pounds, this is a great book to own if you are interested in WW1 military aviation

Another book in the very popular Images of War Series, this time looking at the 'Aces' of the Great War from 1916 to 1918. The usual outstanding selection of rare photographs is supported by concise and clear text in the form of captions and much longer introductory pieces. A very affordable volume with many remarkable images of war.

All in all, this book will be a welcome addition to your bookshelf, brining together as it does, photographs of the aces of all nations together into one book.

There is no let up to new books in the Images of War series and this one goes back again to the topic of WW1. With 123 pages to this particular title, it has a good mixture of photos and text sections. With bombers and observation aircraft being increasingly used, the fighter came into it's own, for both attack and defence. This one is split into 5 chapters, each with an introductory text section to give the background detail and then associated photos. The chapters are The War becomes More Serious: Arras and Bloody April: New Aeroplanes, New Tactics: The Winter of 1917-18: and finally, 1918.