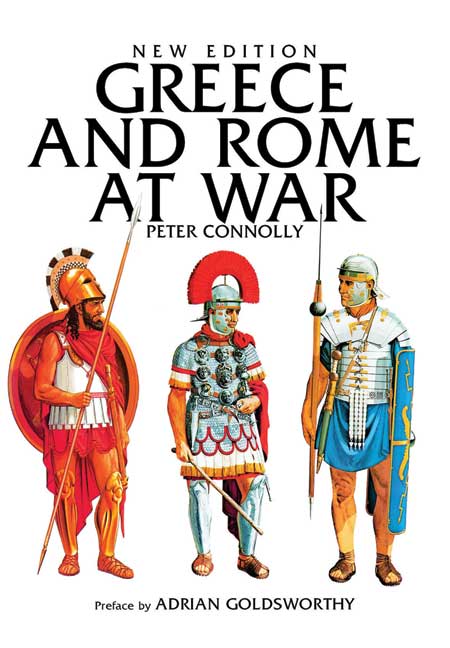 Greece and Rome at War (Kindle)

Click here for help on how to download our eBooks
Add to Basket
Add to Wishlist
You'll be £4.99 closer to your next £10.00 credit when you purchase Greece and Rome at War. What's this?
Need a currency converter? Check XE.com for live rates

This book covers a vast period of time. Connelly uses a very wide range of sources. Connelly has produced detailed analysis of the campaigns, the sources and the battlefields, based on his extensive visits to the battlefields, reconstructions of the ancient terrain and a detailed knowledge of the ancient sources. This is a splendid study of the ancient Greek and Roman war machines, looking at how they were organised, how they fought and how they were armed and equipped in a readable but still detailed manner. Connelly's work is a classic if military history and should be in the library of anyone interested in ancient warfare.

This book has become something of a classic. Connolly possesed a unique combination of skills. He was an able author and talented illustrator with a lifelong passion for the archaeology and history of the Greco-Roman world, in aspects of which – weaponry and battlefields – he became a noted authority. This, his largest book, was like his many others lavishly illustrated with his dazzling trademark colour illustrations of artefacts and reconstruction scenes, accompanied by a clear and authoritative text. This volume remains the best introduction to armies, soldiers, weapons, battles and war among the classical Greeks and Romans, and their enemies.

Lavishly illustrated with his (the author) dazzling trademark colour illustrations of artefacts and reconstruction scenes, accompanied by a clear and authoritative text. This volume remains the best introduction to armies, soldiers, weapons, battles and war among the classical Greeks and Romans and their enemies.

Do you need an excellent guide to ancient warriors for toy soldier and model figure projects? Then look no further. The author combines detailed study of ancient arms and armies with his stunning artwork. This scholarly and visually stunning book is highly recommended.