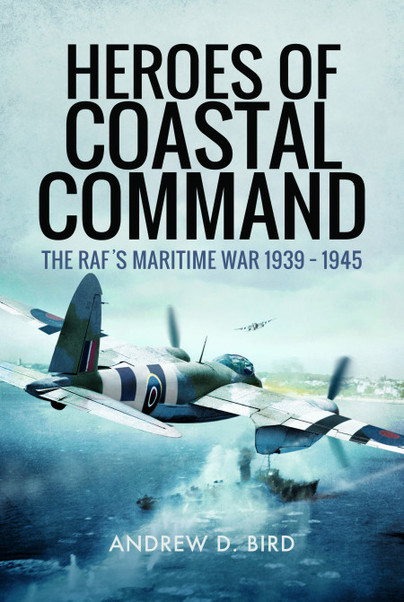 Add to Basket
Add to Wishlist
You'll be £25.00 closer to your next £10.00 credit when you purchase Heroes of Coastal Command. What's this?
+£4.50 UK Delivery or free UK delivery if order is over £40
(click here for international delivery rates)

In Heroes of Coastal Command, Andrew Bird examines the maritime war between 1939 and 1945, interweaving accounts of events of the period with personal stories of individuals caught up in them. Through interviews, letters, diaries and reports, all combined with his own research, the author looks afresh at the maritime conflict, reassessing long-held views of the Cinderella Service’s defensive and offensive capabilities through the eyes of ordinary individuals battling for survival above the oceans against flak gun, enemy aircraft and weather as the stakes rose higher and the number of casualties become catastrophic.

Heroes of Coastal Command makes the reader think again about the RAF’s maritime arm, Coastal Command, which was established in 1936. Throughout the war, its crews worked tirelessly alongside the Royal Navy to keep Britain’s vital sea lanes open. Together, they fought and won the Battle of the Atlantic, with RAF aircraft destroying 212 German U-Boats and sinking a significant tonnage of enemy warships and merchant vessels. Often working alone and unsupported, undertaking long patrols out over opens seas, Coastal Command bred a special kind of airman. This includes individuals such Lloyd Trigg, who was awarded the Victoria Cross; Roger Moorwood, a Blenheim pilot who flew in the Battle of France; Jack Davenport, who flew his Hampden; John Watson, the sole survivor of a Short Sunderland which was lost during a rescue mission; Maurice Guedj, a Frenchman who escaped from Morocco to join the Free French Air Force; Sam McHardy, who for a short while became a Coastal Command ground coordinator posted aboard a Royal Navy destroyer for a raid on Norway; and Ken Gatward, who flew a unique daylight mission over Paris to drop a Tricolore on the Arc de Triomphe.

These are just some of the fabulous stories, full of daring and breath-taking courage, and individuals explored in this book.

Overall, a further great aspect to this tremendous book is the clear reference chapter links at the back, as well an integrated photo selection included, incorporating portraits of the men included. There is a special photograph of Sam McHardy and Roger Morewood in front of Morewood's Blenheim.

[The stories] that appear in print certainly make for interesting reading.

... the book is fascinating - great tales of great men, and as such, should be of interest to anyone with an interest in World War 2 aviation and especially costal defense.

The book is an engrossing read of the RAF practicing sea control in the waters around Great Britain during World War II.

An interesting and in-depth read that rightly puts the spotlight on the immense exploits of those that flew with RAF Coastal Command during WW2. You’ll access some great stories and learn a lot about such an important branch of the Royal Air Force.

The RAF record in maritime warfare is mixed but its crews served with distinction, courage and determination, making an important contribution to survival and ultimate victory. The politicians decided in 1918 to summarily dispense with the RFC and the RNAS, drafting their personnel into the new RAF which was given a monopoly of military aircraft ownership with some disastrous consequences – Highly Recommended.

This fabulous book sets the record straight about the largely unsung heroes of Coastal Command, whose job it was to patrol our coasts and various other coastlines around Europe and the Med, to keep it safe from enemy attack during world war two. My uncle John was a pilot with coastal command, and although I couldn't find his name in the book, I know that what he did during the war made him a hero for me.

Amidst all this there are the many movements of both individuals and whole squadrons, training and more. As well as adding to the WW2 history of the RAF that goes beyond Fighter and Bomber Commands. Most of all, the level of research which has gone into it is not just about a mission history, but a useful reminder that aircrew were individual people, each with their own personal stories that went beyond their basic service record.

This is the first book I have read on the subject and was not left disappointed, coastal command are the forgotten side of the RAF but as this book shows, they played just as important a part.

The book is written from the side of the pilots who served and shows what they went through in exquisite detail.

What makes this book stand out from others is its amazing detail and engaging writing.

No shelf should be without this beautiful book.

Andrew Bird was born in Woodley and studied at Reading College of Art and Design. Having served in the Royal Air Force Reserves, he has written for a number of newspapers and magazines. The author of A Separate Little War and Coastal Dawn, Andrew has also written, presented or acted as a historical consultant in documentaries, for BBC Radio and Television, Channel 4, and NRK in Norway. Andrew also featured as one of the subjects in the internationally-acclaimed artist Dryden Goodwin’s exhibition ‘Open Spaces’.