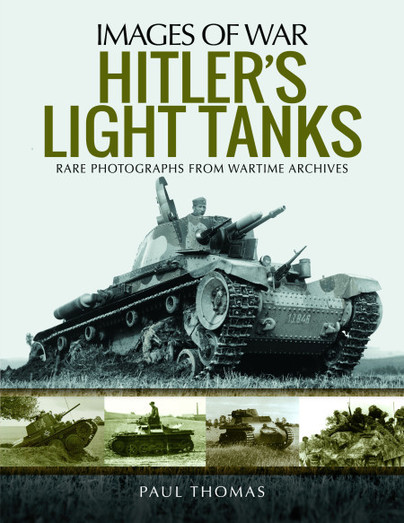 Click here for help on how to download our eBooks
Add to Basket
Add to Wishlist
You'll be £4.99 closer to your next £10.00 credit when you purchase Hitler's Light Tanks. What's this?
Need a currency converter? Check XE.com for live rates

Hitler’s Wehrmacht led the way in armoured warfare as the successful blitzkriegs in Poland and North West Europe in 1940 so convincingly proved. The contribution of light tanks such as Panzers I, II and 35(t) was critical.

As the war spread to the Balkans, north Africa and the invasion of Russia, German engineers worked tirelessly modifying existing light tanks and developing new models. The growing Soviet armoured threat, in particular, spawned tank destroyers such as the Marder III Panzerjäger, SdKfz 138/1 and 139. Anti-aircraft variants included the Flakpanzer 38(t) and the SdKfz 140/1 was a reconnaissance tank armed with a 20mm turret-mounted gun, developed from the SdKfz 22 armoured car, whereas the Aufklarungerspanzer 38(t) carried a 7.5cm gun in the support reconnaissance role.

In the final stages of the war light tanks were phased out and the Marder and 38 (t) were up-gunned; the Wespe was adapted from the Panzer II chassis.

This superbly illustrated book gives a comprehensive overview of the multitude of vehicles and variants that came into service. With the text and captions providing technical data, the images show this formidable array of fighting vehicles in action across the theatres of war.

I highly recommend this book to all afficionados of German armor as well as those interested in World War II history. This will make an excellent addition to your reference collection.

As feature on Miniaturas JM

So, I’d definitely recommend this book for any gamer who is considering building a German army, whether you’re planning an early, mid or late war army. This will be especially relevant for those who have or are building an early or mid-war force.

...an excellent collection and students of German armour will be bound to find something that will interest them. Highly recommended.

An excellent overview of the light tanks and their descendants in German service during World War Two and their appearance in the field.

Rare archive images of Hitler's iconic Panzer tanks is the subject of this latest Images of War volume.

If you are looking for photos of German Light Tanks this is going to be a nice addition to your collection.

Pen and Sword have tapped into a style of book that does cover all the bases from modellers, historians, military enthusiasts and wargamers alike, for modellers you have right in front of you an exact example of a tank that may want to build showing you what tools may be on it, what extra armour they may have put onto it like some spare track links, or it is the whole picture that interests you as you look for background information for an accurate diorama it is all here in the Images of War books. It is hard to critic this book as I find it very useful as someone who loves dioramas and the making of them and having so many photographs with factual information/captions it has to be a must for people interested in Hitlers Light Tanks

I recommend the book and enjoyed reading it.

The very popular Images Of War Series is expanded by this well researched and presented review of the German light tanks which were the basis of the Panzers sent into Poland and continued to serve through to the end of WWII. The Germans expected more time to complete the re-equipment of the Panzers and had to make the most of what they had when they invaded Poland. – Most Highly Recommended.

This book is a must for model-makers and collectors of tank photographs. The vehicles shown are hardly the subject of a neglected history, but collections like this are always welcome. This book is a bit of a gem and it comes highly recommended.

A book dedicated only to the light tanks of the German army in the Second World War, with many photos and informative captions plus an appendix that describes all the variants of the various models. A book that cannot be missing on the shelves of tanks and WWII's fans.

Nice to see good coverage of the German light panzers, in particular the Pz I and II as well the Pz 38(t). A good addition to the series.