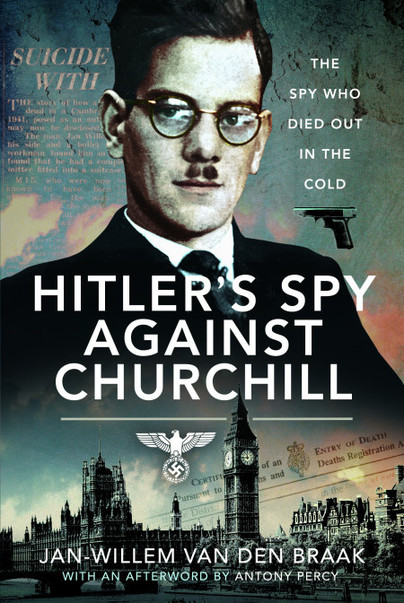 The Spy Who Died Out in the Cold

Click here for help on how to download our eBooks
Add to Basket
Add to Wishlist
You'll be £9.98 closer to your next £10.00 credit when you purchase Hitler's Spy Against Churchill. What's this?
Need a currency converter? Check XE.com for live rates

From the summer of 1940 until May 1941, nearly twenty German Abwehr agents were dropped by boat or parachute into England during what was known as Operation Lena, all in preparation for Hitler's planned invasion of England. The invasion itself would never happen and in fact, after the war, one of the Abwehr commanders declared that the operation was doomed to failure.

There is no doubt that the operation did indeed become a fiasco, with almost all of the officers being arrested within a very brief period of time. Some of the men were executed, while others became double agents and spied for Britain against Germany. Only one man managed to stay at large for five months before eventually committing suicide: Jan Willem Ter Braak. Amazingly, his background and objectives had always remained unclear, and none of the other Lena spies had ever even heard of him. Even after the opening of the secret service files in England and the Netherlands over 50 years later, Jan Willem Ter Braak remained a 'mystery man', as the military historian Ladislas Farago famously described him.

In this book, the author – his near-namesake – examines the short and tragic life of Jan Willem Ter Braak for the first time. Using in-depth research, he investigates the possibility that Ter Braak was sent to kill the British Prime Minister Winston Churchill and discovers why his fate has remained largely unknown for so long.

An astonishing account of the life of one of Hitler's special agents, Jan Willem Ter Braak, whose secret task was to assassinate Churchill. Real Sppoks stuff, and absolutely fascinating.

An intriguing look at the failed attempts by Germany during WW2 to infiltrate spy’s into Great Britain. The clumsy and comical methods and support paperwork was unbelievable. This is a great book if you are interested in the underlying espionage of WW2.

Born in Tilburg (The Netherlands) in 1952, Jan-Willem van den Braak studied law and philosophy. He was a lobbyist and member of the Board of Directors for the central employers’ organisation VNO-NCW in The Hague for 36 years until 2013, and has published several books concerning labour relations.

He translated ‘The Myth of Enlightenment: Seeing Through the Illusion of Separation’ by the German mystic Karl Renz (Samsara 2020) and has always been interested in tales of espionage.