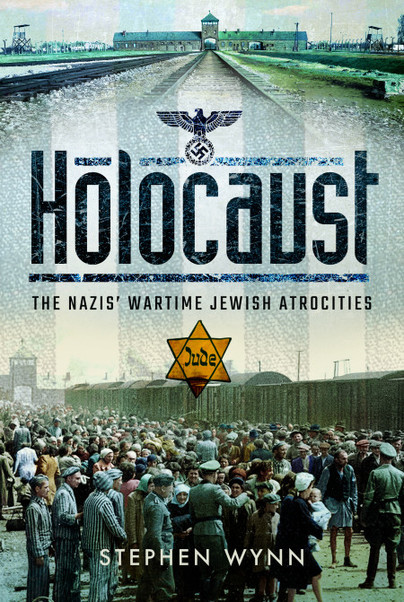 Signed copy available – request a signature plate at the checkout
Add to Basket
You'll be £15.99 closer to your next £10.00 credit when you purchase Holocaust. What's this?
+£4 UK Delivery or free UK delivery if order is over £30
(click here for international delivery rates)

The Holocaust is without doubt one of the most abhorrent and despicable events not only of the Second World War, but of the twentieth century. What makes it even more staggering is that it was not perpetrated by just one individual, but by thousands of men and women who had become part of the Nazi ideology and belief that Jews were responsible for all of their woes.

This book looks at the build up to the Second World War, from the time of Hitler's appointment as Chancellor of Germany in January 1933, as the Nazi Party rose to power in a country that was still struggling to recover politically, socially and financially from the aftermath of the First World War, whilst at the same time, through the enactment of a number of laws, making life extremely difficult for German Jews. Some saw the dangers ahead for Jews in Germany and did their best to get out, some managed to do so, but millions more did not.

The book then moves on to look at a wartime Nazi Germany and how the dislike of the Jews had gone from painting the star of David on shop windows, to their mass murder in the thousands of concentration camp that were scattered throughout Germany. As well as the camps, it looks at some of those who were culpable for the atrocities that were carried out in the name of Nazism. Not all those who were murdered lost their lives in concentration camps. Some were killed in massacres, some in ghettos and some by the feared and hated Einsatzgruppen.

To sum up, to say I “enjoyed” reading the book seems odd and wrong but it is a very captivating, shocking, informative, educational and yes in places heart breaking book. It is a book that enables to easily create imagery in your mind of the vile acts committed and I will say I think this is a book that will stay with me for a very long time. I went through a whole range of emotions whilst reading, from sympathy with those being persecuted, to anger at those in charge of the atrocities, to tears at all the lives lost. I think this book would be a good tool for schools to use. I also think it would be a great aid to any one writing a fictional book about the era.

This short and easy to read account of the holocaust is, I think, really very good. It's not your typical bloated academic heavyweight tome; worthy but nigh on unreadable. Put together by author (and former policeman) Stephen Wynn, it's refreshingly brief, drawing on a very small number of sources, but still covering quite a lot.

Holocaust: The Nazi’s Wartime Jewish Atrocities by Stephen Wynn is a comprehensive pocket book of the leading events, camps and figures in the worst crime against humanity. It is horrific reading but we need to know what happened in memory of the innocents who perished.
Stephen Wynn has clearly done significant research as there were figures I had heard of and those I hadn’t. Many of the perpetrators were captured, tried and executed but some were not. A leading figure, Dr Mengele escaped justice.
There were also leading Jewish figures mentioned including the most famous of all, Anne Frank.
Man’s inhumanity to man had no boundaries. The innocents suffered and died. Many we never forget them.

Holocaust is one of world's most atrocious and tragic events during the WWII. Million of Jews were persecuted, incarcerated and ultimately sent to gas chambers in these concentrations camps in Auschwitz-Birkenau, Belzec, Treblinka, Sobibor and Ravensbruck. However, even before the genocide of European Jews during WWII, many events, operations and laws were already in place to systematically persecute them. This is what this book is about, where it discusses all these events and operations leading up to The Final Solution.

This is an eye-opening book for me for sure as I have no idea about all these persecutions which the Jews gone through even before their deaths at the notorious death camps. This book is a well-researched one filled with a lot of historical facts and harrowing pics of the Holocaust. It is heartbreaking and emotional. There are also information on Nazi officers and doctors who were responsible for these deaths at the camps where they were eventually arrested and sentenced to death.

This is an important book to read. I highly recommend this as there are a lot of other lesser-known yet imperative historical information about Holocaust that you may not have read before.

Holocaust by Stephen Wynn is an encyclopedic listing of every known Nazi and what part they played in the Holocaust. I was surprised to learn some of the backgrounds of various guards. It was clear that some were just pure evil and elevated to a position where they could basically do any demented thought that had ever crossed their minds.

This is a fascinating and depressing read. This book contains a lot of information regarding the many tragedies of the holocaust. The book also contains information about the aftermath of the war and the fate of several participants. The most depressing part is a large amount of key players got away with serving very little, if any, time for their horrible crimes. I had always naively believed that most of the key players were punished for their atrocities. Several people were sentenced to death, had their sentences commuted to life in prison then released a few years later. Individuals responsible for personally killing hundreds, sometimes thousands, got a slap on the wrist. This is about a very depressing but important part of history. This is certainly an adult book containing photos that may give some people nightmares. Very informative and interesting book.

I would recommend this book to those who are just beginning to research this subject, as it is an excellent introduction to the time period.

The book is so moving. Very overwhelming. Very harrowing to read. But interesting all the same. You cannot begin to imagine what they went through. If only it wasn’t a true story being told.

Is it wrong of me to say I enjoyed this book? As I was reading it I kept thinking this was be a good book for secondary school's to add to their reading list. I liked the frankness (is that a word?) and how each element was bite size. I think this could be qouted in many essays.

I have read several fictional books about the Holocaust but this is the first non-fiction I have read on the subject.

I found the book informative and interesting and I learnt a lot. I would recommend this to anyone who wants to gain a better understanding of the Holocaust in an easy timeline format.

This book is perfect for a preliminary introduction to the Holocaust.

I'm hesitant to give this book a five-star rating since the subject has been so well covered over the years. In this case, however, Holocaust really deserves a good rating for the book that it is. the Holocaust has been painted with such broad strokes, but this book really does tell the story of the madness in far greater detail than many others. It's good to know what happened to a lot of the monsters that participated in the madness. Read and get educated.

Such an important read! If you are learning, reading or interested in the happenings of the Holocaust you must pick this up! Wynn brings a great understanding to the timeline and elements of the atrocities committed by the Nazis in WWII. This non-fiction read recounts some of the important facts, timelines, perpetrators, victims, and locations from the very beginning of Hitler's rule to the Ghettos to the Camps (Labor & Extermination) to liberation by the Allies and finally to the trials that brought Nazis and their accomplices to justice, in most cases but sadly, not at all in others. Crammed with in-depth information on the inner runnings of the Holocaust and some of those that were involved, victims included. Mostly written with a matter-of-fact tone, it is different than the multiple works of literature that I have previously read regarding the Holocaust, but despite that fact it has become an immediate favorite on the topic and this will definitely serve as a great reference guide as I continue to learn more about this terrible time in the world's history.

I thought this was a powerful and thought provoking read.

I have read many books on World War II and the Holocaust both fiction and non-fiction and this book really was excellent. I found the book to be a totally compelling read and I read it in just over a day dipping in and out of the different sections that the author has used to split the book. The subject matter was a bit heavy going for me to sit and read in one sitting and I did genuinely feel really sad and a great sense of loss when I read some of the chapters, particularly that on the Warsaw Ghetto.

The only thing that did surprise me was the amount of photos and that is in a good way, they really helped bring everything to life, and yes, they are distressing but this is a story we still need to tell and I preferred that the author was upfront and did not try to disguise what happened and how awful and despicable these acts really were.

This book also remembers the other persecuted minorities that were selected by the Nazis and suffered at their hands. The book has facts and figures which show just how many people were affected.

It is 5 stars from me without a doubt, I thought it was a superb book and the author has dealt with these atrocious crimes against humanity in a thorough and well-developed way. It for me is a must read to anyone interested in this period of history.

I have read many books on the Holocaust (fiction) and 1 or 2 (non-fiction). This is probably my favourite to date.

Despite this book discussing a horrendous subject, I found it really interesting. I learned so much from this read. Kept me intrigued though out.

It still amazes me that this happened in our life time. Absolute madness!

This is the perfect read for anyone who enjoys reading about History.

Be warned, this book does contain pictures, some which are quite upsetting to view.