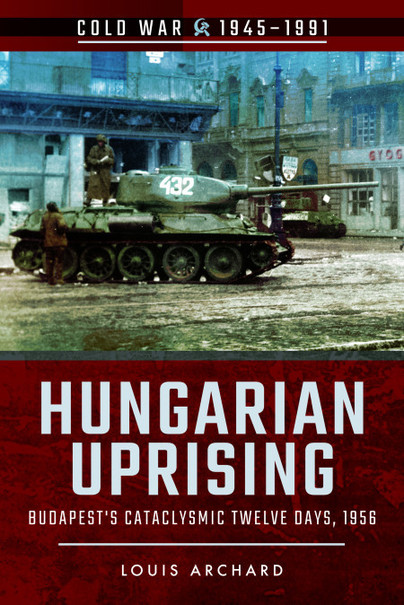 Click here for help on how to download our eBooks
Add to Basket
Add to Wishlist
You'll be £4.99 closer to your next £10.00 credit when you purchase Hungarian Uprising. What's this?
Need a currency converter? Check XE.com for live rates

It is more than 25 years since the end of the Cold War. It began over 75 years ago, in 1944 – long before the last shots of the Second World War had echoed across the wastelands of Eastern Europe – with the brutal Greek Civil War. The battle lines are no longer drawn, but they linger on, unwittingly or not, in conflict zones such as Syria, Somalia and Ukraine. In an era of mass-produced AK-47s and ICBMs, one such flashpoint was Hungary …

Soviet troops had occupied Hungary in 1945 as they pushed towards Germany and by 1949 the country was ruled by a communist government that towed the Soviet line. Resentment at the system eventually boiled over at the end of October 1956. Protests erupted on the streets of Budapest and, as the violence spread, the government fell and was replaced by a new, more moderate regime. However, the intention of the new government to withdraw from the Warsaw Pact and declare neutrality in the Cold War proved just too much for Soviet leader Nikita Khrushchev.

Soviet forces had intervened at the beginning of events to help the former regime keep order but were withdrawn at the end of October, only to return in November and quell the uprising with blunt force. Thousands were arrested, many of whom were imprisoned and more than 300 executed. An estimated 200,000 fled Hungary as refugees. Despite advocating a policy of rolling back Soviet influence, the US and other western powers were helpless to stop the suppression of the uprising, which marked a realization that the Cold War in Europe had reached a stalemate.

Expecting to be liberated from Nazi rule by either British or American forces in 1944, it was Russian forces that occupied Hungary before it became a People’s Republic. Loss of life, damage to infrastructure and war reparation payments saw Hungary’s currency collapse in 1945. With the death of Stalin in 1953, the Politburo established control over Hungary with its various leaders regularly being replaced.
Popular discontent grew until 23 October 1956 saw the population rise up against Communist control and Prime Minister ErnŐ GerŐ requested Soviet troops to quell the violence. A considerably detailed account of the next 20 days of resistance follows.
Whilst the time line is not overly detailed, it concentrates on the key dates in 1956. Included are maps of Hungary and Budapest, B&W and coloured photographs and a short bibliography, but there are no newspaper articles of the day.
This uprising certainly had more lingering ramifications on the international scene than most others in the Cold War period.

A book of great interest with a deep historical significance.

A useful addition to this series of books on the Cold War period.

...well-written and researched... this book could well become an authoritative work on its subject.

Louis Archard lives in Gloucestershire. With a degree in medieval history, Louis has long been fascinated by history, from the Roman Empire up to the Cold War and from the United States to the Mediterranean to the Far East with a particular interest in the First and Second World Wars and the periods immediately around them. His interest in Hungary and the Hungarian Uprising was sparked by a trip to Budapest in October 2007, the fifty-first anniversary of the Uprising, where he saw the bullet holes and other damage from the fighting. His previous titles include a series of books covering the Second World War in the air year by year, a guide to the three main RAF heavy bombers of the Second World War and an image-based book on First World War fighter ace, the Red Baron, Manfred von Richthofen.