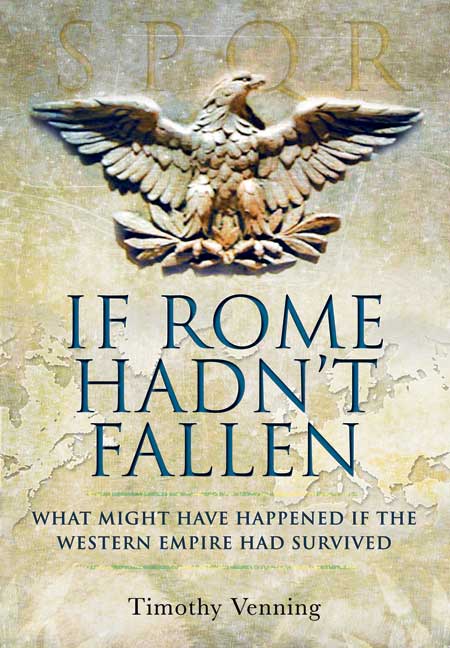 How the Survival of Rome Might Have Changed World History

Click here for help on how to download our eBooks
Add to Basket
Add to Wishlist
You'll be £4.99 closer to your next £10.00 credit when you purchase If Rome Hadn't Fallen. What's this?
Need a currency converter? Check XE.com for live rates

This is a fascinating exploration of how the history of Europe, and indeed the world, might have been different if the Western Roman Empire had survived the crises that pulled it apart in the 4th and 5th centuries.

Dr Timothy Venning starts by showing how that survival and recovery might plausibly have happened if several relatively minor things had been different. He then moves on to discuss a series of scenarios which might have altered the course of subsequent history dramatically. Would the survival of a strong Western Empire have assisted the Eastern (Byzantine) Empire in halting the expansion of Islam in the Middle East and North Africa? How would the Western Roman Empire have handled the Viking threat? Could they even have exploited the Viking discovery of America and established successful colonies there?

While necessarily speculative, all the scenarios are discussed within the framework of a deep understanding of the major driving forces, tensions and trends that shaped European history and help to shed light upon them. In so doing they help the reader to understand why things panned out as they did, as well as what might have been.

Speculative historical questions have always fascinated historians and non-historians alike. Inquiries starting with “what if” compel us to imagine what today’s world would look like had an important historical event not occurred or occurred in a completely different manner. Timothy Venning presents us with a captivating historical scenario in which the Western Roman Empire did not collapse during the barbarian onslaught of the fourth and fifth centuries.

This is a fun read - the earlier sections cast a light on the real fall of the Western empire, while the later sections provide an entertaining view of how history might have played out if Rome had survived in the west.

What if. It's a fascinating subject. It's a line of thought taken up by Roman historian Dr Timothy Venning who, in If Rome hadn't Fallen investigates what would have happened if the Roman Empire had not crumbled under the onslaught of invaders on two fronts. He suggests that if Rome had survived the in-fighting back at home in the fourth and fifth centuries, European and world history could be different today. The author admits that of nesessity much of his predictions are speculative but he hopes his ideas will help the reader to understand why history panned out as it has.