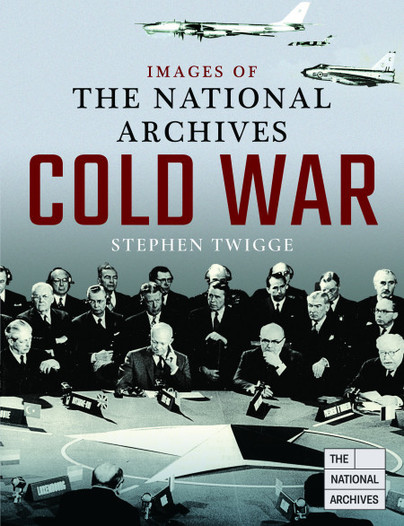 Click here for help on how to download our eBooks
Add to Basket
Add to Wishlist
Get Images of The National Archives: Cold War (Kindle) for FREE when you purchase 2 other eBooks.
Need a currency converter? Check XE.com for live rates

The Cold War tells the story of half a century of superpower confrontation from the end of the Second World War to the collapse of the Soviet Union. The book describes in chilling detail the military and ideological struggle between the United States and the Soviet Union that dominated the post-war landscape. The book highlights the role played by Britain during the Cold War and its involvement in Cold War flash points including the Berlin Blockade, the Cuban Missile Crisis and the Soviet invasion of Afghanistan. The book describes the devastating consequences of nuclear war, the growth and influence of the peace movement and the exploits of the Cold War spy networks built up by both sides. Based on previously secret government reports and papers, the book tells a compelling story of global conflict and superpower politics set against a backdrop of dramatic social and cultural change.

A wonderful evocative read for some of us and perhaps a necessary education for other to learn why the world is as it is today.

As someone who lived through the bulk of the events recorded within these documents I found it fascinating. In some cases not just the typed document that so many are, but also those with the hand written notes and edits from the likes of Margaret Thatcher herself. On the basis that we can't all easily visit the National Archives at Kew and go through the original documents, this is a great way of having some key ones pulled out for us all to see.

I loved the articles that have been chosen for the book, the photos, extracts of official communications all worked brilliantly to bring the Cold War to life and I definitely felt more informed on what had occured after I had finished it. I read the book in two consecutive evenings and genuinely looked forward to picking the book back up.

I found that the book was well written and there was just the right amount of detail, I found it a fascinating read – very highly recommended!!

Stephen Twigge's excellent book is a stark reminder that tensions were in overload during the period known as the "Cold War". The images are riveting and fascinating.

A large part of the people in the world still remembers that period with a hint of nostalgia and relief, especially those like me in the early 80s who remember well the rising tension between the two blocks and then the narrow escape from the agreements between Reagan and Gorbachev. Those who were born later can use this book to understand a fairly long period like the Cold War and all that it left in the world today, which faces certain dangers but which like those of that terrible contrast can be overcome with diplomacy and common sense.