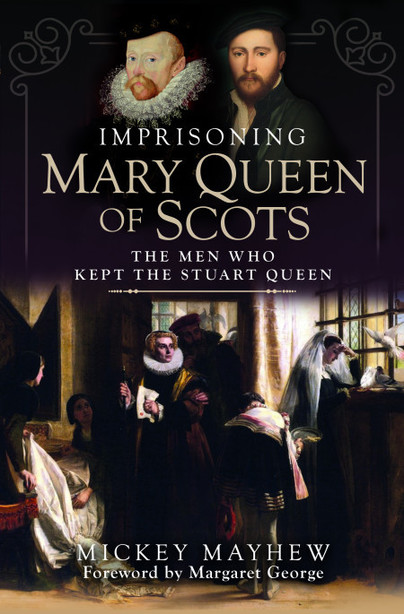 The Men Who Kept the Stuart Queen

Preorder
Add to Wishlist
You'll be £16.00 closer to your next £10.00 credit when you purchase Imprisoning Mary Queen of Scots. What's this?
+£4.50 UK Delivery or free UK delivery if order is over £40
(click here for international delivery rates)

Imprisoning Mary Queen of Scots covers the lives and careers of the men and women who ‘kept’ Mary Queen of Scots when she was a political prisoner in England, circa 1568/9-1587. Mary’s troubled claim to the English throne - much to the consternation of her ‘dear cousin’ Elizabeth I - made her a mortal enemy of the aforementioned Virgin Queen and set them on a collision course from which only one would walk away. Mary’s calamitous personal life, encompassing assassinations, kidnaps and abdications, sent her careering into England and right into the lap of Henry VIII’s shrewd but insecure daughter. Having no choice but keep Mary under lock and key, Elizabeth trusted this onerous task to some of the most capable - not to mention the richest - men and women in England; Sir Francis Knollys, Rafe Sadler (of Wolf Hall fame), the Earl of Shrewsbury and his wife, Bess of Hardwick, and finally, the puritanical nit-picker Sir Amyas Paulet. Until now, these nobles have been mere bit-players in Mary’s story; now, their own lives, loves and fortunes are laid bare for all to see.

From Carlisle Castle to Fotheringay, these men and women all but bankrupted themselves in keeping the deposed Scots queen in the style to which she was accustomed, whilst fending off countless escape plots of which Mary herself was often the author. With the sort of twist that history excels at, it was in fact a honeytrap escape plot set up by Elizabeth’s ministers that finally saw Mary brought to the executioner’s block, but what of the lives of the gaolers who had until then acted as her guardian? This book explains how Shrewsbury and Bess saw their marriage wrecked by Mary’s legendary charms, and how Sir Amyas Paulet ended up making a guest appearance on ‘Most Haunted’, some several hundred years after his death. In that theme, the book also covers the appearances of these men and women on film and TV, in novels and also the various other Mary-related media that help keep simmering the legend of this most misunderstood of monarchs.

I think Mayhew did an excellent job making the topic of Mary Queen of Scots’ jailers exciting for his audience. It was a well-researched book that allows you to view Mary’s imprisonment and jailers differently. If you want to learn more about Mary Queen of Scots and her jailers, I recommend reading “Imprisoning Mary Queen of Scots: The Men Who Kept the Stuart Queen” by Mickey Mayhew.

Mary, Queen of Scots has fascinated people from the days of her youth. That fascination only increased over the last 400+ years. I have read many books on her life, including a previous one by this author. I can say with confidence that this book is a worthy addition to the vast library about her life. Mayhew focuses solely on the various people that served as jailers of Mary, giving in depth details about their everyday circumstances 'guarding' Mary. He also discusses the political climate of the time, particularly the various plots that were hatched to free Mary. We all know how those turned out, but reading about the machinations of her life and those responsible for 'guarding' her never gets old. Definitely a worthwhile read, especially if you're a history buff like me.

It was written very very neatly and objectively, also he discussed and deal all the things very professionally and undauntedly. I think it’s not going to be the last Mickey Mayhew book for me, I will read all of his books which he wrote.

This book is a comprehensive study of Queen Mary of Scotland’s life and death. It begins at her birth with the death of her father only days later. When her life became threatened by the religious situation in Scotland, her mother, Mary of Guise, sent her to France for her safety. At that time, France was an ally of Scotland.

While in France, she was married to the Dauphin. He was sickly and died soon after taking the throne. Her husband’s mother was a controlling woman and left no doubt that Mary was no longer welcome. While she was a surviving Queen, she had no influence or power.

Mary headed back to Scotland, which was by now a very Protestant country. She was held in suspicion since she was a Catholic. Mary, as Queen, was ahead of her time in declaring that she would not interfere with Protestantism as long as she could worship her own faith.

Mary went on to make some very bad decisions as far as men were concerned. Unfaithful husbands, their betrayals, even murderous behavior was the norm for these men. (I had to shake my head and wonder how she concluded that she was in “love” with these rascals.)

When she fled Scotland for England, she was imprisoned for nineteen years. Mary firmly believed that she had a right to the British throne, more so than Elizabeth I. Thus she was a threat to Elizabeth’s reign. She wasn’t, however, thrown into the Tower of London, she was held by various noble families. This was a great burden on the families and often impoverished them. She was a demanding prisoner who expected to be kept in the style to which she was accustomed.

She was implicated in several plots against the English crown.

This book is well written and very interesting. I especially liked the parts about the families with which Mary stayed. I did not know this and was fascinated by their tales.

The book also contains a lengthy bibliography for those who would like to further explore Mary’s life.

This book mainly covers Mary’s imprisonment in England and her troubled relationship with her cousin Queen Elizabeth. Have no fear though it covers much much more with great pictures, and index on the novels movies in place about queen Mary the actors that played the queen and her supporters and the tractors. It is all together A great reference and not just a very entertaining read. I think Mickey Mayhew went above and beyond in writing this book. I have read many books about queen Mary’s imprisonment And I can honestly say none were as detailed when it comes to the people she spoke to day today in those who talked about her behind her back. This is a great book and I highly recommend it. If you love royal history like I do you’ll love this book. I learned so much I didn’t know already and I have read a lot on queen Mary.

I have read the author's "The Little Book of Mary Queen of Scots" before and thoroughly enjoyed the accessibility, simplicity and organisation of it. This book was to prove no less of a disappointment.

The men who were placed in charge of Queen Mary are often sidelined in books due to the magnetic charm that Mary brings, however Mayhew successfully manages to pull these men (and woman) to the forefront in a refreshing angle on a well-known piece of history.

Along with breathing life into the stories of these individuals, I found the background on the residences that Mary was kept in was fascinating and added to the flow of information.

This is an incredibly readable book and one that I think will be essential for all those interested in the Stuart or Tudor Era.

Another great nonfiction book by Pen&Sword! It’s great to learn more about the people and personalities surrounding Mary Stuart during her captivities. So many books care more about Mary and the people around her tend to become background or villains.

Imprisoning Mary Queen of Scots: The Men Who Kept the Stuart Queen by Mickey Mayhew is an excellent nonfiction/history that delves into the fascinating and intricate lives of the many that took on the task of keeping watch over the infamous Mary Queen of Scots during her many years of imprisonment in England.

This is such an amazing book that tells the background, history, and story of each of the individuals that housed Mary, their families, and even a little about the residences themselves. The author does an amazing job fitting it all in within Mary’s life and timeframe, and the reader even gets a better understanding and glimpse into her life as well.

Well-researched, paced moderately, and felt effortless and more like fiction than nonfiction.

Mary Queen of Scots is forced to abdicate