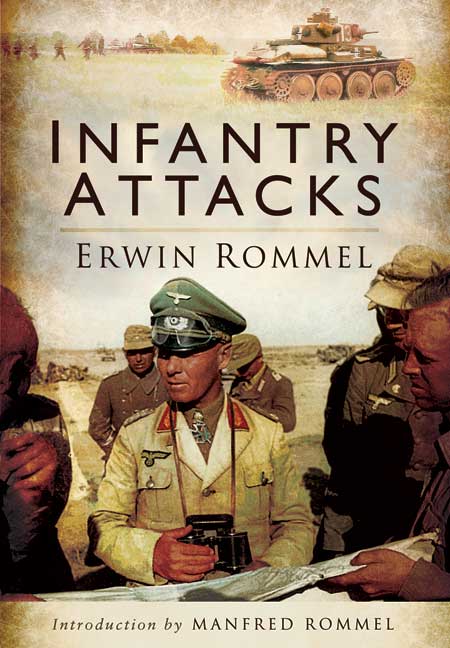 Click here for help on how to download our eBooks
Add to Basket
Add to Wishlist
You'll be £4.99 closer to your next £10.00 credit when you purchase Infantry Attacks. What's this?
Need a currency converter? Check XE.com for live rates

Field Marshal Erwin Rommel exerted an almost hypnotic influence not only over his own troops but also over the Allied soldiers of the Eighth Army in the Second World War. Even when the legend surrounding his invincibility was overturned at El Alamein, the aura surrounding Rommel himself remained unsullied. In this classic study of the art of war Rommel analyses the tactics that lay behind his success. First published in 1937 it quickly became a highly regarded military textbook, and also brought its author to the attention of Adolph Hitler. Rommel was to subsequently advance through the ranks to the high command in the Second World War. As a leader of a small unit in the First World War, he proved himself an aggressive and versatile commander, with a reputation for using the battleground terrain to his own advantage, for gathering intelligence, and for seeking out and exploiting enemy weaknesses. Rommel graphically describes his own achievements, and those of his units, in the swift-moving battles on the Western Front, in the ensuing trench warfare, in the 1917 campaign in Romania, and in the pursuit across the Tagliamento and Piave rivers.

This classic account seeks out the basis of his astonishing leadership skills, providing an indispensable guide to the art of war written by one of its greatest exponents.

It is difficult to overestimate the importance of this text. It provides an intitmate insight into the mind of one of the 20th century's great commanders, a superb technical narrative of First World War combat operations, and a manual of modern infantry tactics.