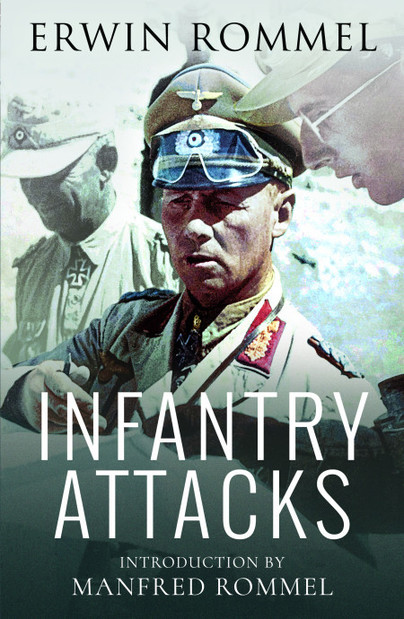 Add to Basket
Add to Wishlist
You'll be £10.49 closer to your next £10.00 credit when you purchase Infantry Attacks. What's this?
+£4.50 UK Delivery or free UK delivery if order is over £35
(click here for international delivery rates)

A fascinating account of Rommel’s fighting experiences in the Great War. This is not his chronological account of his service, but only of the periods when he was engaged in ‘active’ service. It begins at the start of the war when he is serving with a Jager regiment, fighting the French. As such, it is a fascinating description of mobile warfare, before both sides became bogged down in trenches. By 1917 he had been transferred to a Mountain Regiment serving on the Austro-Italian borders. He speaks highly of the fitness and determination of his soldiers. He commanded Rommel’s force, a unit of several companies. It describes a part of the war little known to English readers whose focus is on the Western Front.

Rommel was a determined and aggressive officer whose instinct was to attack. Although the book was written some twenty years after the events in 1937 there is a freshness to the writing. My criticism of the edition I read was that the sketchmaps used to illustrate the different actions are small and lack a compass bearing; it is unclear whether the convention of north being uppermost was always followed. Tracing the movements via Google Maps illuminates one’s understanding.