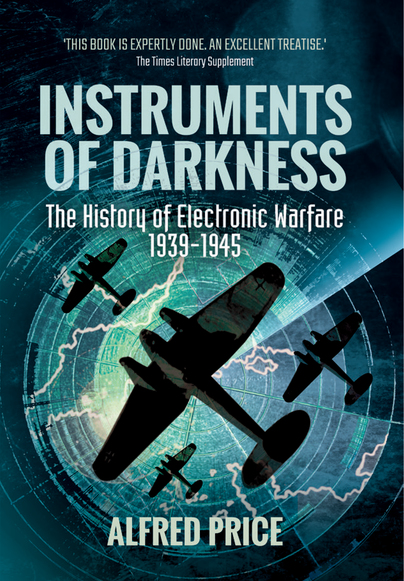 Click here for help on how to download our eBooks
Add to Basket
Add to Wishlist
You'll be £4.99 closer to your next £10.00 credit when you purchase Instruments of Darkness. What's this?
Need a currency converter? Check XE.com for live rates

The rapid evolution of radio and radar systems for military use during the Second World War, and devices to counter them, led to a technological battle that neither the Axis nor the Allied powers could afford to lose. The result was a continual series of thrusts, parries and counter-thrusts, as first one side then the other sought to wrest the initiative in the struggle to control the ether.

This was a battle fought with strange-sounding weapons: 'Freya', 'Mandrel', 'Boozer' and 'Window'; and was characterised by the bravery, self-sacrifice and skill of those who took part in it. However, for many years the use of electronic-warfare systems during the conflict remained a closely guarded military secret. When that veil of secrecy was finally lifted, the technicalities of the subject meant that it remained beyond the reach of lay researchers and readers. Alfred Price, an aircrew officer with the RAF where he flew with V-Force and specialised in electronic warfare and air fighting tactics, was in the unique position to lift the lid on this largely unexplored aspect of the Second World War.

When it was first published in 1967, Instruments of Darkness came to be regarded as a standard reference work on this intriguing subject. This completely revised edition concludes with the Japanese surrender in August 1945 and brings the analysis fully up to date in the light of what we now know.

'This book is expertly done. An excellent treatise.'
The Times Literary Supplement

If you want a concise, authoritative guide to the purpose of devices such as Tinsel, Drumstick, Mandrel, Piperack, Serrate, Boozer and Carpet to name but a few, this book has been the standard work of reference for half a century and it still works.

This work is the 'text book' on its subject. Eminently readable, the text is punctuated by simple diagrams and ample photographs, and is accompanied by technical appendices on German and Japanese radars. A comprehensive glossary and index round out this invaluable work on one clandestine aspect of the Second World War that its a must for every military history library.

For six years, Britain and Germany fought a bitter
aerial war at huge cost in terms of lives lost and aircraft shot down. This book traces effectively the largely hidden battle in the first
widespread use of electronic warfare. Supported by some excellent images. Most Highly Recommended.

I have the 1977 edition of this classic work, concidered by many (including myself) as essential reading on the subject. I have no doubt this book will not disappoint the reader, highly recommended!