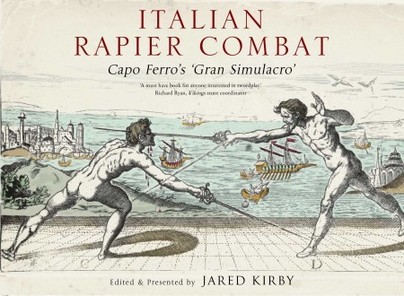 Add to Basket
Add to Wishlist
You'll be £24.00 closer to your next £10.00 credit when you purchase Italian Rapier Combat. What's this?
+£4.50 UK Delivery or free UK delivery if order is over £35
(click here for international delivery rates)

Featuring more than 40 beautiful illustrations, this stunning work presents one of the world’s most influential fencing treatises. Ridolfo Capo Ferro was a legend in his own lifetime. His intricate instructions were emulated throughout a Europe bewitched by this grace and style and are a window into his mastery of swordsmanship.

This updated edition includes a new introduction and a revised glossary with many technical terms now translated. Additionally, a modernised translation makes it easier for the reader to understand Capo Ferro's intention.

Capo Ferro begins by examining the rapier in detail – its component parts and their suitability – before discussing the actual use. He details the timing and distance needed to control your adversary, while looking at defensive aspects such as the guards, parries and the importance of quick footwork. He also covers using the rapier with auxiliary weapons such as the dagger, cloak and shield.

Presented by fencing master Jared Kirby, this handsome volume is a vital historical record and essential reading for any historical swordfighter, student of martial arts or military historian.

It's a neat piece of history and an esteemed primary source, so if you're researching rapier combat for a paper, historical reenactment, or historical fiction writing purposes, this is a great resource to find those extra tidbits you won't see in the Three Musketeers or The Princess Bride.

Written more than 400 years ago, this is still a famous and classic work dedicated to the Italian rapier. The language has been updated to more modern vernacular and includes an updated glossary. The book includes a table of contents, but no index. The first part of the work covers general concepts, glossary, positions, and theory. The second part, containing the plates (see cover), show two dueling gentlemen in various stages of nudity, presumably to better show anatomy. Many of the plates are quite gruesome with rapiers & daggers sticking out of various body parts.

I feel quite certain that the book's value lies more in the historical importance, and unlike many modern treatises, will have limited practical use for actually *learning* rapier fencing to any meaningful degree. I was most fascinated by the facsimile plates showing the illustrations and bookplates from the original 1610 edition.

This would be a good selection for library acquisition, historical re-enactors (SCA and similar), and readers interested in historical armed combat. Many such extant Renaissance manuscripts have value also for costumers and historians, but the illustrations in this volume show nude or semi-nude combatants, so that isn't really applicable here. It might be of some interest for calligraphers and artists, but I would recommend looking at the content first, since the text makes up the largest portion.

Five stars for the historical value. Quite gruesome content, so sensitive readers should be aware of that and proceed accordingly.

Originally written and published in 1610 by Ridolfo Caro Ferro, a new edition with an introduction and glossary came out in 2004. This later version forms the basis of this edition and has a new introduction and a revised glossary. Also the language has been modernised in this new edition to make it more accessible.
Ridolfo Caro Ferro’s book is considered to be the definitive work on the Italian rapier. The language is very evocative of the time it was written, but is concise and much more modern and vivid than you’d expect. Ridolfo sets out a statement of intent early on in the text - “There is nothing in the world that Nature…regards with greater foresight and more diligence than the preservation of self.” The aim of fencing, he writes, is the “defence of oneself” and that defence is its main aim. He begins with the basics and describes the various different parts of the rapier’s blade, the necessary positions of parts of the body and the finer points of striking. One section is entitled “Methods that one must hold against a brutal man” which sounds almost casually terrifying but Ridolfo’s advice is reassuring.
The original illustrative plates presented in the book show the anatomy of a rapier duel with two semi-naked 17th century Italian gentlemen squaring off. The pictures gradually become quite brutal.
I know nothing about fencing but the nobility of the art-form comes across vividly though Ridolfo’s writing. The translation is skilful and sympathetic to the intent of the original text. This may be ancient knowledge but it’s not in any way outdated and this book is still held in high regard to this day, and this beautiful edition is the most definitive version available.

Ridolfo Capo Ferro of Cagli was a fencing master in the city of Siena, best-known for his rapier fencing manual published in 1610.