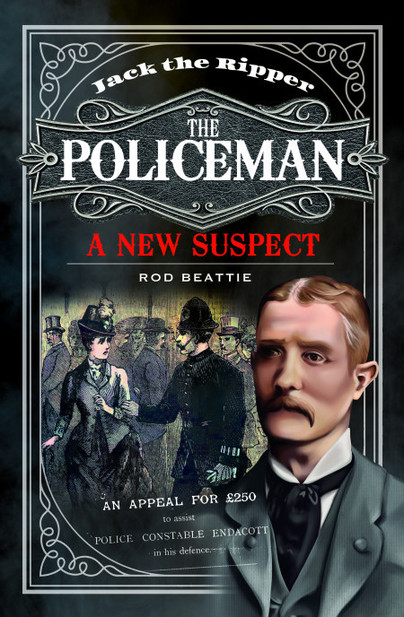 Jack the Ripper - The Policeman (Hardback)

Preorder
Add to Wishlist
You'll be £16.00 closer to your next £10.00 credit when you purchase Jack the Ripper - The Policeman. What's this?
+£4.50 UK Delivery or free UK delivery if order is over £35
(click here for international delivery rates)

Imagine you were a police officer and had been dominated as a child by an abusive mother who didn’t really want you and as an adult had been served bastardy orders twice, firstly by a woman in whose house you lived and then by a woman you had a relationship with.

Then, to top it all after you had become a police officer in another city you arrested a woman you thought was a prostitute, whose subsequent actions caused you to be accused of perjury and you ended up in court at the Old Bailey. Although you were found not guilty, it ruined your career and left you seriously in debt and though you were still a policeman you were taken off the streets and assigned to a menial job guarding a museum.

As a police officer you were in a perfect position to take revenge on those people you thought had ruined you, prostitutes.

This book contains the complete reason Jack the Ripper came to be. It sheds new light on the mystery of the killer. After all, who is going to suspect a policeman going about his daily duties of being one of the world’s most infamous serial killers.

The iconic story of Jack the Ripper gets another possible identity: a policeman who worked in London's East End. This hypothesis gains credence because policemen had unchallenged access to people on London,'s streets. The author gives a fascinating backstory in an attempt to bolster this hypothesis. Fascinating read!

The thing you will love about this story is it brings new details to old facts..

The author has discovered a new subject of interest. He has given us enough detail that there is enough evidence to add a new name into the search for Jack the Ripper.

The new Person of interest what is a police officer Bowden Endacott. We learn that this person grew up with an abusive parent he fathered illegitimate children and was served with papers. He became a police officer. Albeit not a great one. He then arrested a woman he thought was a prostitute. Through this court case which is gone to in great detail he ended up being accused of perjury and standing in the Old Bailey.

This led him to having his career ruined. He was given a job guarding a museum. No longer doing the job he wanted to do guarding the streets. Also as a result of all the court case he was left seriously in debt. It also left him with a serious dislike of prostitutes

The author has done so much research and gone into so much detail that I really feel that this person should be classed among those as a subject for the new possible identity of Jack the Ripper. You close the book sit back and digest all the new details and realise that there’s more to the story then we originally thought.

Thank you to netgalley and the publisher for the opportunity to see an ARC. And an opportunity to broaden my thoughts on the subject of Jack the Ripper.

This is a detailed account of the five acknowledged Ripper murders and I commend the author for the time and effort taken to give the details of those women’s lives. The respect shown the victims is important and not often seen in true crime accounts. With careful analysis, the author presents a good argument.

Rod Beattie lives in Birmingham with his partner of many years and their Golden Retriever named Holly, who naturally rules the house. Rod’s first love has always been music, and he has been playing the guitar for over 50 years. He has a great fascination with anything to do with the role the police played in the Victorian era, although he’s never been in the police. Rod is also a keen photographer.