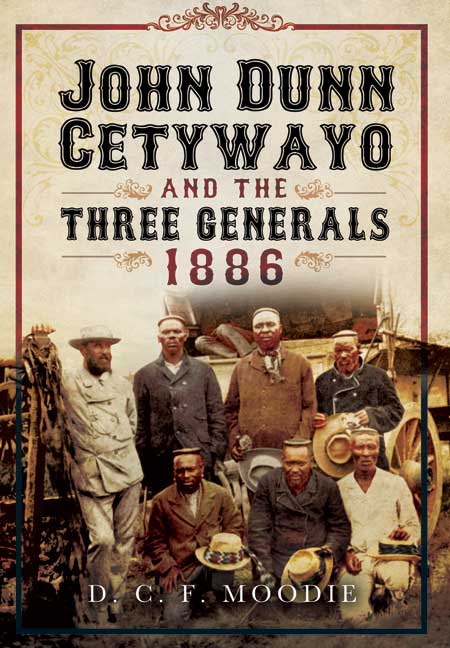 Click here for help on how to download our eBooks
Add to Basket
Add to Wishlist
You'll be £4.99 closer to your next £10.00 credit when you purchase John Dunn Cetywayo and the three Generals 1861-1879. What's this?
Need a currency converter? Check XE.com for live rates

John Dunn, resembling a hero of fiction rather than a normal man, was one of the most extraordinary characters of 19th century South Africa. In 1852,at the age of 16 he turned his back on the fledgeling colonial settlement of Port Natal and, crossing the Tugela River, headed into Zululand.. King Cetsshwayo recorded his first meeting with Dunn, mentioning that the night had been bitterly cold: I ordered the servants to bring him in and a tall, splendidly made man appear He was dressed in rags ... I loved this white man as my brother and made him one of my induna.[chiefs] Such was Cetshwayo's generosity despite Dunn having earlier fought on the side of the king's brother during the Zulu War of Succession in which twenty thousand died in a single battle.

Undear Cetshwayo's patronage, Dunn became a Zulu chief in every respect except for the colour of his skin. Later, when still under 20, he was educated by a British officer and accepted into colonial society thus allowing him to lead the double life of an English gentleman and, when he crossed back over the Tugela to his 49 wives, that of a powerful Zulu induna. He also assisted Kind Cetshwayo in supplying the Zulu army with a vast number of guns.

When war was declared in 1879, Dunn wished ato remain neutral but treacherously sided against his friend and benefactor the Zulu king. With the British victorious, Sir Garnet Wolseley, who thought Dunn to be a very fine fellow, divided Zululand into five Kinglets, and proclaimed Dunn overlord of the largest..

This autobiography is not only a fascinating insight into one of the most influential men in Natal history but also states his candid perception of several British generals including Lord Chelmsford and Sir Garnet Wolseley.

Duncan Campbell Frances Moodie, the editor of John Dunn's reminiscences, was a man of many parts and talents. He is, perhaps, best known for his book, now a rare collector's item, The history of Battles and Adventures of the British, the Boers and the Zulus. Moodie was born in Capetown in 1838, the seventh son of Donald Moodie, a government official. He was also a great extrovert, delighted in performing well publicised athletic achievements. For a while he sought his fortune in Australia and it would have been on his return to Natal that he met John Dunn, with whom, no doubt, he had much in common, and arranged the editing and publication of Dunn's extraordinary adventures.