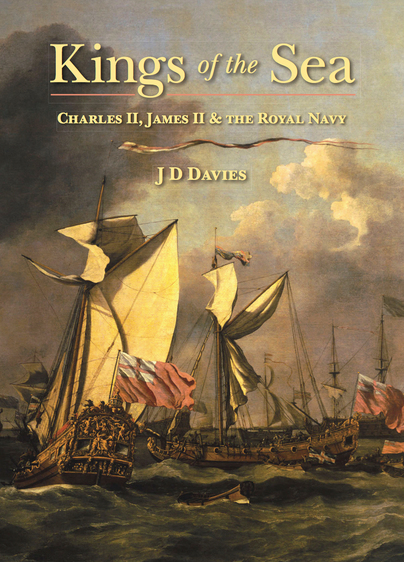 Kings of the Sea (Kindle)

Kings of the Sea was awarded the Certificate of Merit at the annual Maritime Media Awards, 2018.

You'll be £12.00 closer to your next £10.00 credit when you purchase Kings of the Sea. What's this?
Need a currency converter? Check XE.com for live rates

It has always been widely accepted that the Stuart kings, Charles II and James II, had an interest in the navy and more generally in the sea. Their enthusiastic delight in sailing, for instance, is often cited as marking the establishment of yachting in England. The major naval developments in their reigns on the other hand – developments that effectively turned the Royal Navy into a permanent, professional fighting force for the first time – have traditionally been attributed to Samuel Pepys.

This new book, based on a wide range of new and previously neglected evidence, presents a provocative new theory: that the creation of the proper ‘Royal Navy’ was in fact due principally to the Stuart brothers, particularly Charles II, who is presented here, not as the lazy monarch neglectful of the detail of government, but as a king with an acute and detailed interest in naval affairs. The author also demonstrates that Charles’ Stuart predecessors were far more directly involved in naval matters than has usually been allowed, and proves that Charles’ and James’ command of ship design and other technical matters went well beyond the bounds of dilettante enthusiasm.

It is shown how Charles in particular, intervened in ship design discussions at a highly technical level; how the brothers were principally responsible for the major reforms that established a permanent naval profession; and how they personally sponsored important expeditions and projects such as Greenvile Collins’ survey of British waters. The book also reassesses James II’s record as a fighting admiral.

It is a fascinating journey into the world of the Stuart navy and shows how the ‘Kings of the Sea’ were absolutely central to the development of its ships, their deployment and the officer corps which commanded them; it offers a major reassessment of that dynasty’s involvement in naval warfare.

This book is highly recommended. For the enthusiast, it is both beautiful to look at and interesting to read. For the academic, it is a concise delivery of the most up-to date scholarship on the Royal Navy following the Restoration. Perhaps its most important potential audience is future historians, for whom it could be the book that catches their imagination and introduces to them to complex historical discussions in a comfortable and inclusive way.

Kings of the Sea is an excellent work detailing the role the Stuarts undertook in the design and construction of many ships and in the establishment of the infrastructure needed to support a permanent navy. This is a view of the seventeenth-century Royal Navy without battles or naval heroes as the central theme. Still the text holds your interest thanks to Dr. Davies’ conversational style, which makes it seem as if he is speaking with you instead of lecturing to you.

This is a very important study that authoritatively re-writes the history of this key formative period of our naval history, and places responsibility where it belongs, in the 'Kings of the Sea' and not their Secretary. It is a handsome, well-illustrated volume and is necessary reading for everyone interested in the history of the Royal Navy.

Beautifully produced andlavishly illustrated through out this book is well recommended.

This is a great book: well written, easy to read and a fascinating insight into the 17th Century Royal Navy and the two Kings who were intimately involved in most aspects of fleet operations and ship building. It is most strongly recommended to both the general reader and the naval expert alike.

There has been something of an upsurge of interest recently in the Stuart monarchs, particularly the later two, with exhibitions in a number of galleries in the capital and also a number of TV documentaries (not always strictly accurate but good for viewing figures). Therefore it is perhaps not surprising that J David Davies, a notable authority on the Restoration navy with 8 fictional works, such as Gentleman Captain (2009) one of his Matthew Quinton series, and 5 non-fiction such as the prize winning Pepys Navy (2009), should make his own contribution.

However this is not just a re-statement of the established wisdom of the period. As Davies himself says in his Preface and Acknowledgements, the idea that “Samuel Pepys was, perhaps, not quite as responsible for all that happened in the navy of the Restoration era as posterity believes …” was one that had been wandering around his mind since the 1980s when he had been carrying out research on Pepys’ papers at Magdalene College Cambridge, and this led him to the thought that the contribution of Charles II and his brother James, later James II, may well have been “somewhat neglected”. However he had not pursued the idea in detail apart from some articles in academic journals until the present time. The publisher’s jacket notes remind us that the Stuart monarchs’ interest in the navy and the sea generally is well known and they did much to establish yachting in England. But this involvement is usually overshadowed by their dandy image, supposed lazy demeanour and, at least on Charles’ part, excessive womanising (hence the TV documentaries). Their interest in and command of ship design, navigation and exploration went way beyond the bounds of dilettante enthusiasm and Charles is recorded as introducing certain technical improvements in ship design and construction and having detailed discussions with shipwrights in the Royal Dockyards about them.

So how do the Stuarts come to have received such a bad press? Davies points out that although they may have been heavily involved, they committed very little to paper, unlike the diarists of the period such as Pepys and John Evelyn. He is particularly critical of the former’s practice of talking up his own involvement, to the extent that nearly every technical improvement or change in administrative procedure that did so much to establish the Royal Navy as the pre-eminent permanent, professional fighting force was due to him (a lowly clerk and son of a tailor!). Earlier historians, notably Arthur Bryant, took the bait but Davies cites one particular instance in his Appendix on the Admiralty Meeting of 22 July 1676 as being what we may call his eureka moment. What Davies found was that the brief minutes of this meeting, kept in the Admiralty Journal, written by Samuel Pepys and kept in his Cambridge Library, is particularly short on the details of the attendees, extent of discussion and influence on what was agreed that appears in rough minutes by his brother John Pepys, his successor as Clerk of the Acts of the Navy Board, in the Rawlinson manuscripts held in the Bodleian Library at Oxford. Samuel describes the main players as Charles II and himself but John notes other attendees includes James Duke of York and other items being discussed. As Churchill and Mountbatten have noted, the best way to establish ones place in history is to write it oneself.

Apart from two early chapters on the legacy of James I and Charles I and the Protectorate of Cromwell, Davies’ work covers not only the entire period of Charles II and James II reign after the Restoration in 1660 up to what he refers to as the Inglorious Revolution in 1689, including the navy’s increasing involvement with Protestant William III instead of Catholic James II. There is also a final chapter on the Jacobite Navy. Although the work is loosely in chronological order, it does not follow the strictly wars and battles approach of other historians; Davies takes us through the naming of the King’s ships, and in some cases re-naming those built under the Protectorate (but did this really need two chapters), technical innovations including the Royal Yachts and Frigate Galleys for use against the Barbary corsairs, the introduction of examinations for command instead of there being Gentlemen Captains, the origin of English sovereignty of the surrounding seas and the early development of Britain’s maritime empire, which unfortunately was not matched by the amount of money available to provide ships to guard it (a lesson politicians never seem to learn).

The book is lavishly illustrated with a large number of paintings of ships, battles and admirals, many in excellent colour and early maps of the period. There is also a very useful Bibliography and very detailed 19 page End Notes. The quality of the production by Seaforth Publishing is excellent.

Overall Davies has produced a well researched and authoritative work that challenges the perceptions of past historians and it is thoroughly recommended to both students and historians alike.

The book is copiously illustrated, adding a visual appeal to the reader’s enjoyment of the very high standard of writing in this work, which is most readable and engaging, often gripping in its narrative and reading almost as compulsively as a novel, a medium in which the author is indeed also very accomplished.

Thoroughly recommended as a ‘good read’ quite apart from the reader’s personal favorites in period or nautical subject.

An interesting book, providing a look into the history of the Stuart dynasty's involvement in the Royal Navy.

Having enjoyed the author’s ‘Pepy’s Navy: The Ships, Men and Organisation’ I looked forward with anticipation to this new volume. The book is a fascinating journey into the world of the Stuart navy showing how the Kings of the Sea were absolutely central to the development of its ships, their deployment and the officer corps. This is the real beginning of what would become the greatest navy in the world.

Another brilliant volume of maritime history, this time from the era of Charles II and James II. The detail is amazing and the narrative is both educational and entertaining.