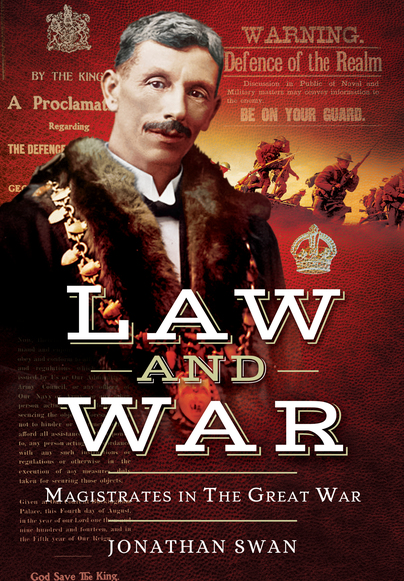 Magistrates in the Great War

You'll be £4.99 closer to your next £10.00 credit when you purchase Law and War. What's this?
Need a currency converter? Check XE.com for live rates

The office of justice of the peace has existed since the twelfth century, when good and lawful men were first appointed to sit in judgement of their peers. Unpaid and untrained, these lay magistrates were the backbone of the English judicial system, dealing with the vast majority of criminal cases in the police courts and the petty sessions.

By the start of the twentieth century, social attitudes were changing and the magistrates, drawn from the wealthier classes, were seen as out of touch with the communities they served. The new Liberal Government of 1906 instituted reforms, which allowed the appointment of the working classes.

Then came the Great War. Within days of the outbreak of hostilities, the government introduced the Defence of the Realm Act. With several amendments over the years, this all-encompassing legislation resulted in the creation of hundreds of subsidiary regulations, many of which affected the lives of ordinary people in a way they had never expected.

Many, including the magistrates themselves, fell foul of the myriad orders, covering billeting, licensing, lighting and rationing, which were enforced by the new special constables. At the same time, the conscription of the criminal classes saw a huge fall in the normal workload of the courts and the closure of many prisons.

The magistrates responded as best they could. Some magistrates went to war; some lost their lives. Others served in the many voluntary organisations and committees that appeared across the country, such as the Military Service Tribunals or the Volunteer Corps.

The end of the war saw a further change to the old order when the first women magistrates were appointed, marking the birth of modern magistracy.


The authors wealth of legal and statistical detail is balanced by individual case histories which throw a fascinating, sympathetic light on the social history of the times. This is a work as accessible to the layman as the lawyer and must surely be the definitive work on the subject.

Swan’s book includes most aspects of legislation, crime, courts and the legal world during the war years. As well as detailed analysis, there are interesting snippets: the Probation Service originated with Police Court missionaries; and defendants at committal proceedings who decided not to call evidence were recorded as saying ponit se (I put myself upon the law – that is, the jury can decide).

This is an entertaining and informative read.

This work covers a whole new aspect of the war and as such makes for highly recommended reading.

This is a Pen and Sword title written by Jonathan Swan (author of 'Chelmsford in the Great War'.)

It looks at the role of the magistracy in pre-war times and how the changed circumstances of 1914-18 were dealt with by Justices of the Peace.

Inevitably, 'Dear old DORA' gets a good airing though many other areas that required the involvement of the magistrates are covered. Swan states that much of the war-related legislation was often rushed, badly drafted and imposed new laws even though perfectly formed existing ones would have fitted the bill.

There is information on billeting, on aliens (friendly or otherwise), trading with the enemy, food hoarding, deserters and 'conchies', soldiers' allotments and allowances, sexually transmitted diseases, bogus charities and much more. All from the angle of how the magistracy coped with the new burdens resulting from the need for greater government control over its citizens in time of war.

The book included some interesting statistics on wartime offences and was an enjoyable and informative read.

I’ve read a good number of books about the First World War and I would thoroughly recommend Law and War to anyone with an interest in that period‚ whether military or social.

Despite its title, this book covers much more than the challenges face by Magistrates during the Great War. It is well researched and deals with the mass of new legislation and how it affected the lives of ordinary people.

This book examines the impact on the lives of the ordinary people of the country by looking at individual stories. It will be of great interest not only to those interested in the history of the Magistrates in this period but also to those studying the First World War and the history of the Special Constabulary.

This is a book probably aimed at the specialist reader, especially anyone in the military legal world or researching law. It would certainly be ideal for cross referencing and for further research.

This is a meticulously researched, well-written and informative book, which will be of great use to the historian of the home front. To have so much detail of the emergency legislation and how much of it was enforced in one book has many advantages. The amount of research that has gone in to the production of the book must have been enormous with endless lists of references to newspapers. The author is to be congratulated on a job well done!

Swan undertakes meticulous research to document the main focus of this book, namely the experience of ordinary people and their interactions with the law and courts during and in the immediate aftermath of the war.

Jonathan Swan's book, Law and War: Magistrates in the Great War, reveals how his counterparts in the First World War were faced with large numbers of ordinary people struggling with new legislation.

The publisher has a fine tradition of publishing books on topics that are much under-reviewed. The author has provided a very rare glimpse into the work of Magistrates during the Great War. An
original and fascinating account in the effects of total global war on society at home.

The information was interesting, so I'd recommend this book to people interested in this aspect of WWI.

In Law and War: Magistrates in the Great War, Swan provides a detailed and fascinating window into the impact of wartime legislation on the lives of ordinary people – housewives, landlords, neighbours, shopkeepers, etc. – and intertwines this with the development of the magistracy during the Great War.

Although the office of justice of the peace can be traced back to 1361 in the reign of King Edward III, the magistrates’ court as we understand it today developed from the reforms to the system of summary justice which began in the middle of the nineteenth century. The outbreak of World War I in 1914 and Parliament’s frantic work to enact emergency legislation in the form of the Defence of the Realm Act, 1914 (DoRA), however, brought a new dimension to the work of the courts. The war required a shift in legal thinking, from one based around ‘the enemy within’ (the Stuart rebellions, the English Civil War, etc.) to deal with a nation at war and for the first time in a century facing a genuine prospect of invasion.

Swan undertakes meticulous research to document the main focus of this book, namely the experience of ordinary people and their interactions with the law and courts during and in the immediate aftermath of the war. In Chapter 7, for instance, the author describes how alcohol abuse was several orders of magnitude greater than anything seen today. Magistrates soon found that their existing licensing powers insufficient, which led to the enactment of the Intoxicating Liquor (Temporary Restrictions) Act, 1914. Sensitive to the fears of prohibition and the influence of the abstinence campaigners, the government used the theme of ‘efficiency’ to justify and promote a new attitude to alcohol consumption, and a new and separate Defence of the Realm (Liquor Control) Act, 1915 created the Central Control Board to oversee and coordinate the patchwork of orders in place around the country.

Another theme which is explored in this book is the rise of probation as an innovative and alternative sentencing option. Swan notes that, initially, the sentencing options available for magistrates were largely limited to fines or imprisonment. The latter was much more widely used, particularly for fine defaulters. In 1907, probation was very much an innovation and magistrates were still learning how to use it effectively. However, the war brought about a profound change in social conditions, in particular with respect to women and families. Youth crime increased rapidly, variously attributed to the absence of fathers and male teachers on military service, mothers absent on munitions work, and the subversive influence of the cinema. Given the limited sentencing options at the time, magistrates increasingly turned to the use of the relatively new option of probation.

Throughout the book, Swan presents a picture consisting of a patchwork of emergency legislation emerging as a reaction to the war, and discusses its impact on ordinary individuals. These include regulations under DoRA, such as the lighting regulation which had more impact on the community than any other, and brought thousands of people into court. But it also includes other legislation, such as the Aliens (Restriction) Act, 1914 and its role in the internment of tens of thousands of enemy aliens, following the sinking of the Lusitania by a German submarine in early 1915 and subsequent public disorder. The author concludes that the ‘great unpaid’ could be considered causalities in this war, because the legislators failed to impose order, enacted some poorly-drafted legislation, and responded weakly to the threats and challenges faced by British society at the time.