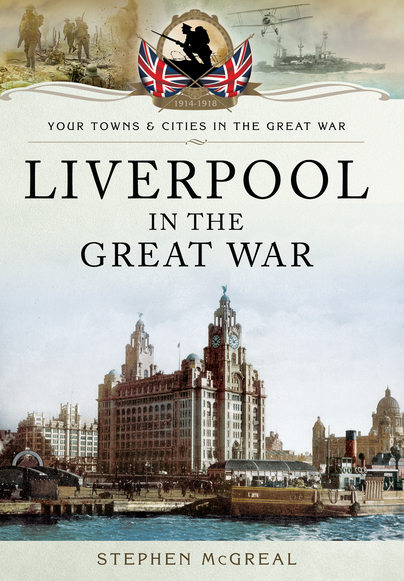 Liverpool in the Great War (Kindle)

Click here for help on how to download our eBooks
Add to Basket
Add to Wishlist
You'll be £4.99 closer to your next £10.00 credit when you purchase Liverpool in the Great War. What's this?
Need a currency converter? Check XE.com for live rates

At the dawn of the twentieth century Liverpool had eight miles of docks thronged with cargo ships loading or discharging cargoes. The city prospered through its maritime trade, and this led to the Cunard Line and other illustrious transatlantic passenger carriers making Liverpool their home port. As the storm clouds of war gathered, few would perceive the conflagration would change the political and social make-up of Britain including the emancipation of women.

When Britain declared war on Germany in the summer of 1914, Liverpool's geographical position demanded it be one of the chief home bases of wartime operations. It was a challenge the city accepted with relish and went on to become one of the most significant home front contributors to the Allied victory.

Justifiably, the city cenotaph proudly declares 'out of the north parts came a great company and a mighty army,' but there is a forgotten army of patriotic civilians whose endeavours played a key role in the Allied victory. Despite an acute shortage of skilled labour, Liverpool led the way in the construction of munition factories and developed the required skills to 'feed the guns.' Initially men who were too old for military service produced shells, a local factory became the first in the country to introduce women shell makers, this initiative was replicated throughout the nation. As the men made the transition from street to trench, Liverpool and district developed into a vast arsenal employing approximately 30,000 women and producing a million shells monthly. Civilians were also actively involved in tending the wounded, fund-raising for hospital equipment and ambulances and the provision of home comforts for those at the front.

When the German submarine onslaught almost severed Britain's maritime trade routes food rationing was introduced. Damaged ships limped into Liverpool where their precious cargoes were salvaged and large swathes of Liverpool were ploughed up as the nation 'dug for victory.'

The city was also a portal through which thousands of American troops passed; they stayed briefly at Springfield Park Rest Camp before entraining south. Liverpool opened the first hospital in the United Kingdom for the treatment of American servicemen. Another first occurred on Independence Day 1918, when the first post-revolution march past of American troops took place on British soil.

This is the fascinating but largely forgotten story of how Liverpool provided the sinews of war.


McGreal's seventh book - arguably his finest yet - is sure to attract and generate the interest [of many] since his telling of ordinary folk coping during extraordinary times is heartfelt and invites reflection.