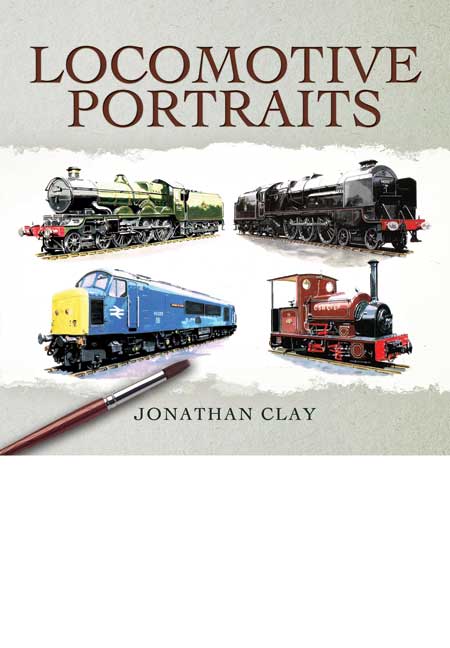 Click here for help on how to download our eBooks
Add to Basket
Add to Wishlist
Get Locomotive Portraits (Kindle) for FREE when you purchase 2 other eBooks.
Need a currency converter? Check XE.com for live rates

Whilst ever there have been railways there have been artists keen to paint them. Many famous names have included aspects of the railways in their paintings, including most notably Claude Monet and J M W Turner. This enthusiasm has been kept alive by the formation in the UK of the Guild of Railway Artists, of which there are over two hundred members including the author of this work. In recent years Jonathan Clay has had many requests to produce his own book of pictures and Locomotive Portraits is the result.

Jonathan discovered his own unique style by happy accident - in order to save time for his first railway event in 1999, he painted a series of locomotive pictures without backgrounds, intending to add the scenery later. However, they sold so well that they became the norm and his well-known series of Locomotive Portraits was born.

Containing over a 170 pages of stunning artwork, this book is a treat for rail and art lovers alike.

It is both an enjoyment for the eyes as well as a visual documentation in which to be fixed when it comes to painting or investigating.

A miniature work of art.

This is not just a railway-themed art book, it also contains a short autobiography, and a chapter detailing 'How to paint a locomotive portrait'.

This volume features an evocative selection of paintings from the respected transport artist Jonathan Clay. Each page features a single portrait with a story type caption.
Members should obtain a copy for the coffee table.

This book should appeal to railway enthusiasts and aficionados of railway art, as well as existing confirmed collectors of the artist's work. Warmly recommended.

This volume features an evocative selection of paintings from the respected transport artist Jonathan Clay.

Each locomotive portraits are accompanied by nice descriptions in the engaging, conversational tone. The captions say nothing about technique or the like but there is a fine opening chapter showing nine steps from first sketch to finished piece. The very first chapter offers an entertainingly written autobiography. Even the Acknowledgements are worth reading because there is nothing boilerplate about them

Railway art has a long and impressive lineage, for instance Turner and Monet, included some aspects of railways in their art. The tradition continues to this day, with the formation in the UK of the Guild of Railway Artists, which has over 200 members, including Jonathan Clay. Jonathan has responded to requests to produce a book of his artwork, and the results are very impressive.

He stumbled upon the method of producing painting of locomotives without backgrounds due to the demands of time, and this method has proved very popular. He truly is a superb artist and the text for each painting is just right.

The large hardcover format and the high quality of the artwork reproductions is a credit to Jonathan and Pen & Sword. No digital format could ever do justice to this work in the same manner.

An outstanding record of this well known artists work.Over 150 images,steam, diesel, narrow gauge, standard gauge and miniature, all reproduced in a large format with informative and accurate captions.Highly recommended, but buy the BOOK not the KIndle you need to hold and study this beautiful book!

Jonathan Clay has become one of the best known transport artists in the UK. He has produced over 1100 paintings and drawings, of which over 730 are of his well-known and widely-acclaimed ‘Locomotive Portraits’. His pictures now hang on homes, railway buildings, and museums all over the world. In the 1950s and 1960s, he was an enthusiastic train- and bus-spotter, and began to draw and paint seriously. In the mid 1970s he held exhibitions of his work in Lancashire, and even had a display of motor racing paintings on show at the Donington Park Racing car museum, in 1979.