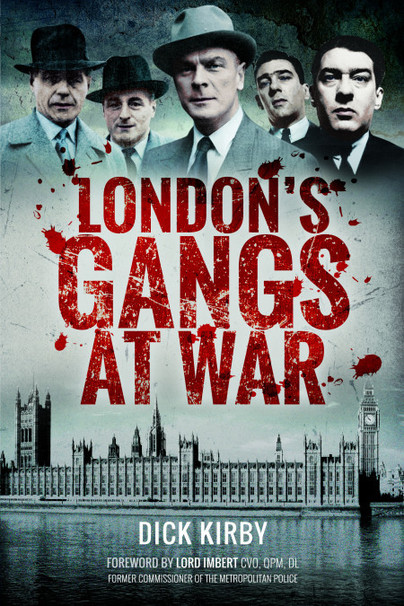 As featured by The Telegraph, Mail Online and The Sun.

You'll be £4.99 closer to your next £10.00 credit when you purchase London's Gangs at War. What's this?
Need a currency converter? Check XE.com for live rates

The 1950s and 1960s saw a changing of the guard in London's gangland. A new and even more ruthless breed of criminal emerged to replace the ageing generation of likes of Sabini, Mullins and Hayes.

Protection rackets on bookies, club owners and shops were commonplace. Prostitution and drugs offered rich pickings. Police corruption was all too commonplace.

Thanks to media interest the names of Charlie Richardson, Mad Frankie Fraser, Scarface Smithson and the Nichols became as widely known as they were feared. And then there were the Kray Twins, whose notoriety and brutality became watchwords. But as this insider book reveals they did not have it all their own way. For a thrilling and shocking story London's Gangs at War is in a class of its own. What makes it so chilling is that the murders, torture and mayhem actually happened.

It was a good book, and I learned a bit more about a part of British history that I didn't know about.

An inherently fascinating read that is immensely informative and exceptionally well written, "London's Gangs at War" is an extraordinary study and an unreservedly recommended addition to both community and academic library Criminology collections.

A great reading with extraordinary attention to detail and completely dissipating the myth that has developed over the years around these criminals. The author Dick Kirby puts in the context of time, with a thorough search, the frightening criminal networks that feared London and the Londoners. Highly recommended to anyone interested in British society in the 1960s or history of crime.

★★★★★ A great read with outstanding attention to detail & as previous readers have noted, it completely dispels the myth's that have built up over the years. Highly recommended & will be checking out Dick Kirby's other works.

★★★★★ This is a valuable book by Dick Kirby, whose writing gets better and better with each new addition to his impressive list of titles. It relies on a nice mixture of research, detective experience and personal recollections from people involved whose accounts would otherwise be lost to history without the author's assiduous search for testimony from those who played a part in the events.

★★★★★ This is another fine book by Dick Kirby, and it goes into minute detail about the various (nefarious) activities of the criminal activities of London's hoodlums and gangs of the 20th century. It is an important tome, and should, and will, dispel the myth that these criminals were lovable rogues, once and for all.

For a thrilling and shocking story London's Gangs at War is in a class of its own. What makes it so chilling is that the murders, torture and mayhem actually happened.

This is an excellent work, which has benefitted from meticulous research and has brought a number of complex very serious crime enquires to a manageable scale, resulting in this accessible and excellent book.

I really enjoyed reading this book. This book is well worth your time reading it.