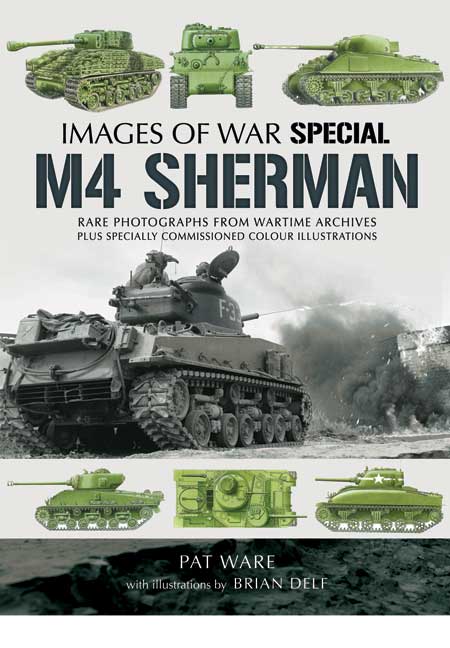 Click here for help on how to download our eBooks
Add to Basket
Add to Wishlist
You'll be £4.99 closer to your next £10.00 credit when you purchase M4 Sherman. What's this?
Need a currency converter? Check XE.com for live rates

The M4 Medium Tank - the Sherman – was one of the most famous tanks of the Second World War. It was produced in greater numbers than any other Allied tank, it fought on every front – in Western Europe, on the Eastern Front, in North Africa, Burma, the Pacific – and it continued to serve effectively as a front-line fighting vehicle in the Korean War, the Arab-Israeli wars, the Indo-Pakistani wars. Pat Ware's new history of this remarkable tank covers in detail its design and development, its technical specifications and the many variants that were produced, and he reviews its operational role in conflicts across the world.

While the Sherman outclassed the older German tanks it encountered when it was first put into combat in 1942, it was vulnerable to the later German medium and heavy tanks, the Panther and the Tiger I and Tiger II. Yet, as Pat Ware shows, the Sherman was more effective than these superior German tanks because it was cheaper to build, reliable, easy to maintain and produced in such large numbers. It was also adaptable - it was converted into a tank-destroyer, an amphibious tank, a recovery vehicle, a mine-flail, a personnel carrier – and, after the Second World War, the soundness of its original design was proved as it was developed to confront more modern tanks in combat.

Pat Ware's expert account of this remarkable fighting vehicle is accompanied by a series of colour plates showing the main variants of the design and the common ancillary equipment and unit markings. His book is an essential work of reference for enthusiasts.

Excellent book that any Sherman fan would like on the bookshelf. This book examines the M4 Sherman and all its variants throughout its period of existence. The book provides a good mix of text and images that are concisely captioned with the text being very informative with a adequate amount of technical data.

This is definitely a great addition to the “Images at War” series from Pen & Sword and will serve as a source of inspiration and reference to any modeller interested in allied armour.

Overall, this book contains an excellent selection of photos, well supported by a good text.

Amongst the many images featured in the book there are some great photos showing the production lines that built the Sherman during the war, offering a fascinating insight into the production methods of the time. This is another cracking book from Pen & Sword and on that will appeal to vehicle enthusiasts, historians and even model makers.

A must have for the Sherman enthusiast. The book is an easy read with a tremendous amount of technical data and the photographs are exceptionally presented. The Images of War series of books has become a favourite of the modelling community and this book, M4 Sherman, would be a fine addition to anyone's library. Highly recommended!