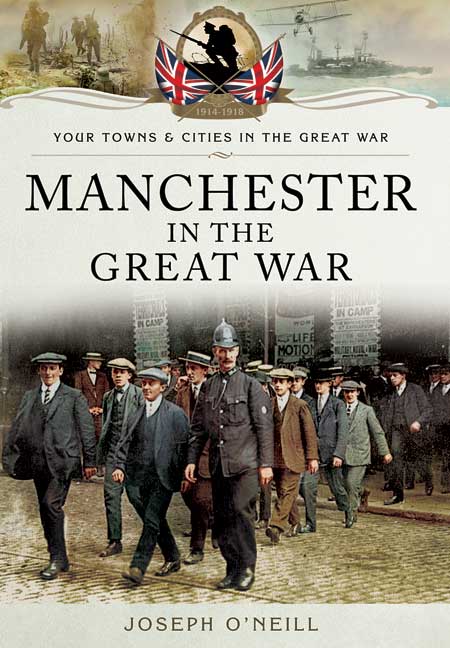 Manchester in the Great War (Kindle)

Click here for help on how to download our eBooks
Add to Basket
Add to Wishlist
You'll be £4.99 closer to your next £10.00 credit when you purchase Manchester in the Great War. What's this?
Need a currency converter? Check XE.com for live rates

How the experience of war impacted on the town, from the initial enthusiasm for sorting out the German kaiser in time for Christmas 1914, to the gradual realization of the enormity of human sacrifice the families of Manchester were committed to as the war stretched out over the next four years. A record of the growing disillusion of the people, their tragedies and hardships and a determination to see it through.

Manchester was more profoundly involved in the Great War than any provincial city. Manchester men volunteered in greater numbers than any others; its women, hardened to the rigours of factory life, flooded into munitions and engineering workshops and toiled long hours while contending with cruel shortages. Children's lives were disrupted as schools became hospitals and the city developed into a major centre for treating the wounded. A great port, an industrial powerhouse, the region's commercial and distribution centre, Manchester overcame hunger and deprivation to become the engine that drove an exhausted and impoverished nation to an unlikely victory.

No provincial city was more profoundly involved in the Great War than Manchester. Its men volunteered in greater numbers than any others; its women, hardened to the rigours of factory life, flooded into munitions and engineering workshops, toiling long hours while contending with cruel shortages.

Written by a former history teacher turned author from Westhoughton, he has turned the spotlight on the city.

A very readable and interesting book, packed with information about how Manchester coped with the hardships of the Great War.
Recommended to anyone with and interest in Manchester's Great War history.

As seen in the Bury Times.

As seen in the Prestwich & Whitefield Guide.

As seen in The Bolton News.

This is an excellent book in a brilliant series of books on our towns and cities during the war. It is an excellent tool to show students today how much was done by the whole population in the war effort. This book helps to bring home that the war was not just fought at the front but here at home too.

As seen in Lancashire Living Magazine.

This book will obviously have greater appeal in the north west and amongst those who can count Manchester servicemen in their family trees, but it also stands on its own as a nicely drawn vignette of one of Britain's foremost industrial cities during the First World War. I did not know for instance, that by July 1918 there were 2400 Manchester Regiment PoWs in Germany who were dependent on the War Comforts Committee and its fundraising efforts.