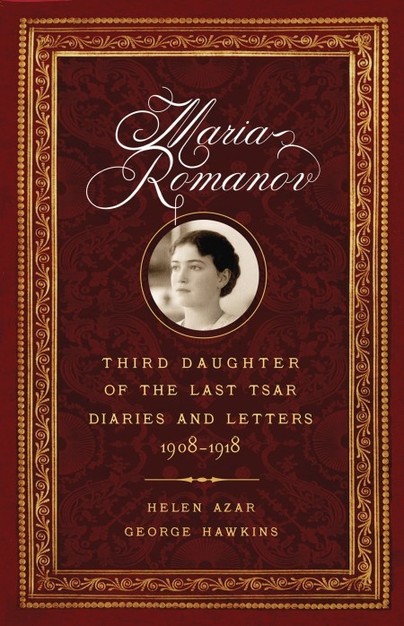 Add to Basket
Add to Wishlist
You'll be £19.99 closer to your next £10.00 credit when you purchase Maria Romanov. What's this?
+£4.50 UK Delivery or free UK delivery if order is over £35
(click here for international delivery rates)

In the twilight of the nineteenth century, a third daughter was born to Tsar Nicholas II and his wife Alexandra. Grand Duchess Maria Nikolaevna—known to her family and friends simply as “Mashka”—grew into an empathetic, down-to-earth girl, unaffected by her imperial status. Often overshadowed by her two older sisters, Olga and Tatiana, and later, her brother Alexei and younger sister Anastasia, Maria ultimately proved to have a uniquely strong and solid personality.

In Maria Romanov: Third Daughter of the Last Tsar, Diaries and Letters, 1908–1918, by translator and researcher Helen Azar with George Hawkins, Mashka’s voice is heard again through her intimate writings, presented for the first time in English. The Grand Duchess was much more than a pretty princess wearing white dresses in hundreds of faded sepia photographs; Maria’s surviving diaries and letters

offer a fascinating insight into the private life of a loving family—from festivals and faith to Rasputin and the coming Revolution; it is clear why this middle child ultimately became a pillar of strength and hope for them all. Maria’s gentle character belied her incredible courage, which emerged in the darkest hours of her brief life. “The incarnation of modesty elevated by suffering,” as Maria was described during the last weeks of her life, she was able to maintain her kindness and optimism, even in the midst of violence and degradation.

On a stuffy summer night in 1918, only a few weeks short of her nineteenth birthday, Maria was murdered along with the rest of her family in a cellar of a house chosen for this “special purpose.” Two sets of charred remains, confirmed

to be Maria’s and her brother Alexei’s, were not discovered until almost ninety years later, separately from those of the other victims of the massacre. As the author relates, it is still unknown if these remains will ever be allowed to be laid to rest.

HELEN AZAR is a librarian at the Free Library of Philadelphia. She has translated and published several books based on the writings of the members of the last Russian imperial family, including The Diary of Olga Romanov, also available from Westholme Publishing.

NICHOLAS B. A. NICHOLSON is a noted specialist in Russian fine and decorative arts. He has been an art advisor and researcher for private collectors, museums, and other institutions. An expert on the Russian Imperial Court, he publishes and lectures frequently on imperial topics.