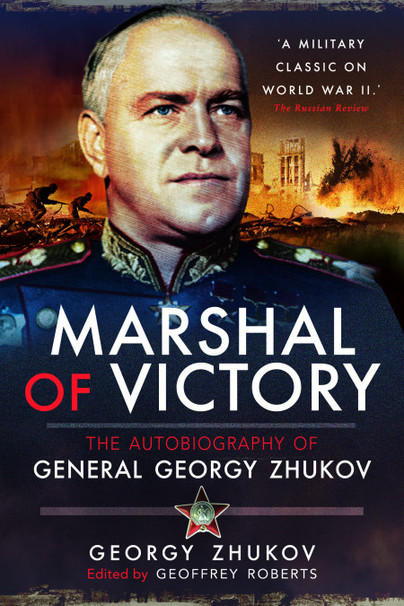 Add to Basket
Add to Wishlist
You'll be £25.00 closer to your next £10.00 credit when you purchase Marshal of Victory. What's this?
+£4.50 UK Delivery or free UK delivery if order is over £40
(click here for international delivery rates)

Marshal of the Soviet Union Georgy Konstantinovich Zhukov remains a national hero in today's Russia as the man who beat Hitler and saved both Russia and Europe from the Nazis. His reputation is that of a Russian patriot and an independent-minded general who remained a key figure in Stalins high command throughout the Great Patriotic War. Zhukov played a significant role in virtually all the principal battles on the Eastern Front during the Second World War including Moscow, Leningrad, Stalingrad, Kursk and Berlin. It was Zhukov who formally accepted Germanys unconditional surrender on 9 May 1945. In his post-war autobiography Zhukov chronicled his brilliant career as he saw it and wanted it to be seen. His memoirs reveal the why and how of decision-making at the highest level of the Soviet command throughout the war, and his continued loyalty to the Soviet dictator despite being demoted after the war. Zhukov's writing is a fascinating and invaluable source for anyone interested in the war on the Eastern Front and presents intriguing insights into Zhukov the man as well as Zhukov the military commander.