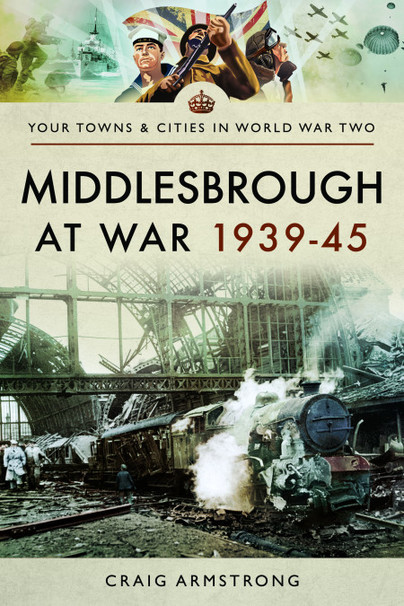 Click here for help on how to download our eBooks
Add to Basket
Add to Wishlist
You'll be £5.99 closer to your next £10.00 credit when you purchase Middlesbrough at War 1939–45. What's this?
Need a currency converter? Check XE.com for live rates

Middlesbrough was of vital importance to Britain’s war effort. The town, and its surrounding area, contained a number of vital industries including shipbuilding, chemicals, iron, steel and other metals, and engineering, as well as a joinery firm that played a leading role in the wartime aviation industry. The ICI plant at nearby Billingham also played a leading role in the creation of petrochemicals and explosives.

As with many communities, the start of the war saw Middlesbrough faced with hastily having to bring its Air Raid Precautions and civil defence services up to full strength. With its strategic importance it was believed that Middlesbrough would be an obvious target for the Luftwaffe. As a result, schoolchildren and other vulnerable people were evacuated from the town at the very start of the war in a scheme that did not prove entirely successful.

Middlesbrough became the first built-up urban area in mainland Britain to be bombed. In the event, Middlesbrough was raided periodically throughout the war with the worst coming on the night of 25/26 July 1942, when waves of Luftwaffe bombers dropped almost 30 tons of bombs on the town. The raid killed sixteen people and caused very extensive property damage. Meanwhile, just days later, bombs fell on the town’s railway station as a train was waiting at the platform there. The pictures of the resulting damage were wired around the world.

Due to its location on the coast and being a city dominated by industry and maritime, Middlesbrough was always going to be a target for the Luftwaffe. What we did see was the city being under regular attack throughout the war in an attempt to undermine the morale of the community, but also in the hope of hampering the British war effort. In the classic style of the Towns & Cities in World War Two series, we learn how the war affects all aspects of life, from having to rebuild after air raids and losing loved ones from the attacks. Seeing women having to work at the various factories and workplaces to replace the men who were having to go off to war. Then you have the various small organisations having to pick up and help in an hour of need and daily life structures being compromised and changed as everyone has to deal with some aspect of the war on the home front.

As I have said before this series is, in my opinion, fantastic and the author here Dr Craig Armstrong has done another brilliant job in writing about the history of a city but finding a good balance in the telling of the stories and lives of the people of Middlesbrough. The writing is excellent and this is supported throughout with some great ‘local’ pictures from around Middlesbrough. Certainly a fascinating read and an excellent addition to the series.